The sheer treachery and imbecility implicit in these manufactured protests is seldom mentioned, but it is always a factor. 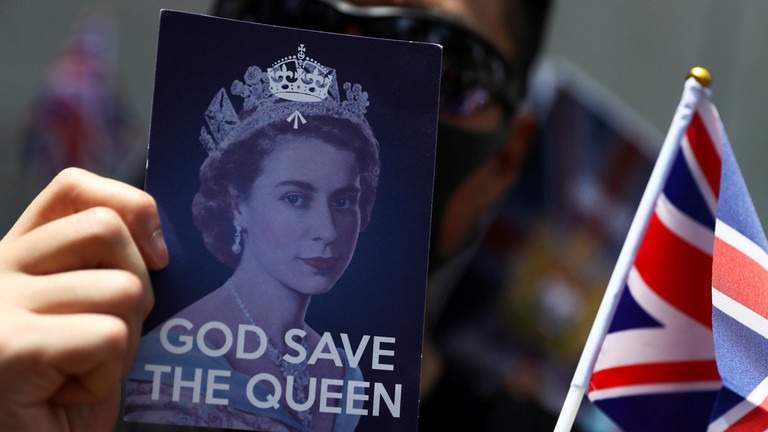 How ignorant and servile can these people get? They obviously know nothing of their own history under Western colonialism, or could care less about it.

ABOVE: A protest at the British consulate General in Hong Kong. ©REUTERS / Athit Perawongmetha
Activists flocked to the UK Consulate in Hong Kong on Sunday, waving Union Jacks and singing ‘God Save the Queen’ in a bid to convince London to step in and protect them from Beijing like it would have in the colonial era.

The hundreds of protesters who gathered in front of the British Consulate-General claim the Chinese government is encroaching on their freedoms established under the ‘one country, two systems’ formula at the end of British colonial rule in 1984. Calling on the former sovereign to do something about it, they waved British flags as well as those of colonial Hong Kong, and sang patriotic British songs, including ‘God Save the Queen’ and ‘Land of Hope and Glory’.

Britain had control over Hong Kong for decades after taking it from imperial China – a result of the Opium Wars, which reduced what was an economic powerhouse to destitution.

God Save the Queen sung outside the British Consulate-General at Sunday's protest calling for the UK to take action to assist Hong Kong protesters.

Since it’s highly unlikely that modern Britain would launch a colonial war the way it did so often in the 19th century, the protesters have other ideas on how Her Majesty can support them. For example, granting full British citizenship to holders of the British National (Overseas) passport – a special type of document that was granted to hundreds of thousands of Hong Kong residents. It allows visa-free travel to the UK, but only for six months, and does not include work privileges.

Some protesters were eager to pledge allegiance to Britain, chanting: “We are British and we will never surrender” and “Rule, Britannia!” 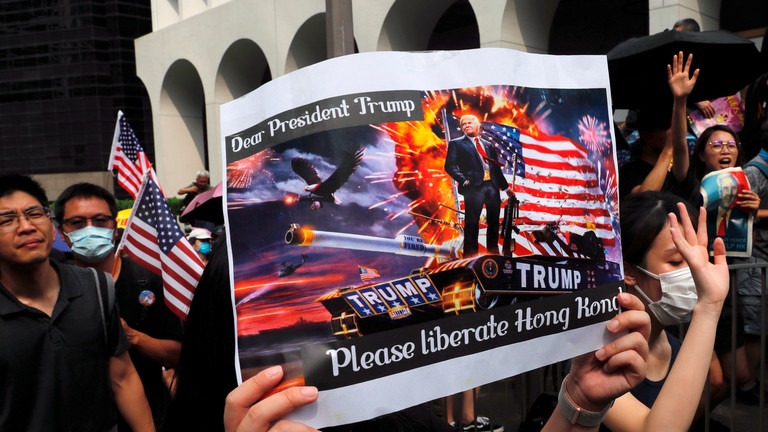 Hong Kong protesters bidding Trump to "liberate" them. The transfer of loyalty to another nation, especially one clearly engaged in destabilising operations against the legitimate government, is a form of treason. (Rt.com/T. Siu)

“We are British and we will never surrender...We British will never never never be slave”. Protesters also sing the Land of Hope and Glory. #HongKong #HongKongProtrst #BritishConsulate #Admiralty pic.twitter.com/huHU3q8i5e

It’s not the first time the Hong Kong protesters have urged a foreign power to intervene on their behalf. Demonstrators have also been seen waving American flags, singing the US national anthem, and holding up meme-like photos of a rifle-toting Donald Trump standing on top of a ‘Trump’ tank, urging him to “liberate Hong Kong.”

Also on rt.com Hong Kong protesters cozy up to US, ask to ‘liberate’ city amid ongoing violence (VIDEOS)

The protests started in March over a now-scrapped extradition bill – which activists claimed was meant to undermine the city’s judiciary and to persecute dissidents – and have continued with ever-increasing demands from the protest leaders. Some demonstrations turned violent, leading to clashes with police, but Beijing has so far been reluctant to intervene with force.

Beijing accuses the US and UK of spurring the protests, and the demonstrators’ ostentatious gestures of loyalty to those very nations – like Sunday’s anthem-singing – hardly allay those perceptions.

#HK radical protesters fail to get the facts right on a banner which states that "China owes US$1 trillion." Here is a free lesson: As of May, the US owes China about $1.11 trillion, not the other way round. #香港 pic.twitter.com/hky6WCDJqA

Empires Are A Secret Until They Start Falling