Home ABOMINATIONS Hell No! We can’t go!: Why on Earth Would the US Go to War with Iran over an Attack on Saudi Oil Refineries?

Hell No! We can’t go!: Why on Earth Would the US Go to War with Iran over an Attack on Saudi Oil Refineries?

What's the US doing claiming it has the right to attack Iran over a Houti drone attack on a Saudi Arabian refinery? The US doesn't buy Saudi oil. America is exporting oil and gas. There's no US treaty of mutual support with Saudi Arabia, writes TCBH! journalist Dave Lindorff. This is madness!
[dropcap]P[/dropcap]resident Bone Spur, backed by his war-mongering Secretary of State Mike "Armageddon" Pompeo, tweeted yesterday that the US military is "locked and loaded," ready to attack (bomb) Iran if it can be proven that Iran was behind a drone bomb attack on Saudi Arabia's oil refineries.

There are plenty of news media in the US that are seconding that notion of reflexively starting a hot war with Iran if it can be shown that Iran and not Houti forces in Yemen attacked Saudi oil facilities. Certainly that is the case with Fox News and Rupert Murdoch's New York Post .

BELOW: Typically reckless warmongering by Murdoch's NY Post. Billionaires like Murdoch can always find presstitutes to do their bidding. That's why Murdoch and his criminal ilk should be prevented from wielding media power. 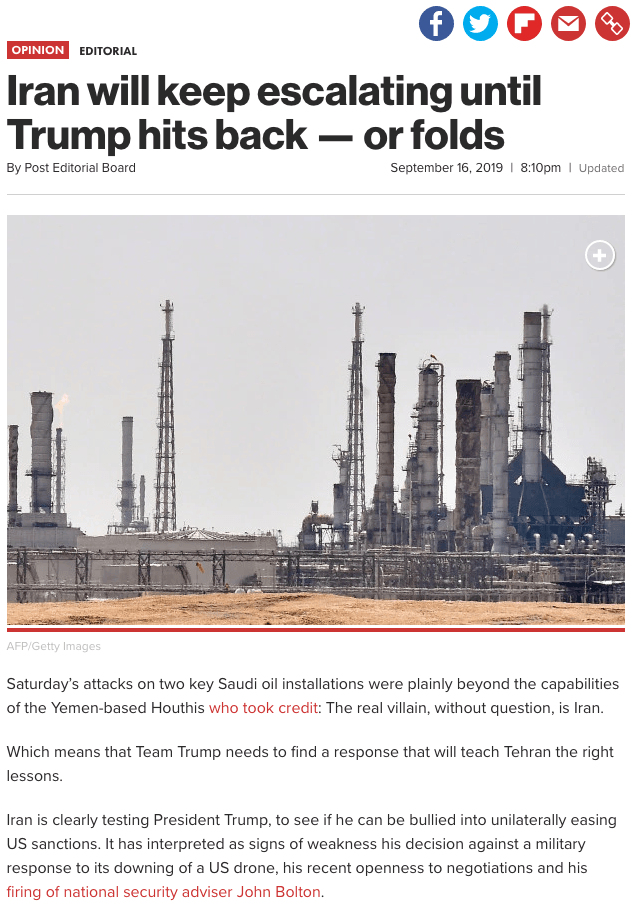 But hold on. Is anyone asking why the US has to do this, or even has a right to do this? If anything, the loss, even temporary, of half of Saudi Arabia's oil production capability doesn't hurt the US. Unlike in 1973-74, when Saudi Arabia led OPEC in an embargo of oil shipments to the US for its support of Israel in the 1973 Arab-Israeli War, today the US is self-sufficient in oil and gas and in fact is a net exporter, meaning that with Saudi exports cut in half, the market for US oil will be bigger and at higher prices.

Furthermore, the US has no mutual assistance treaty with Saudi Arabia no obligation to defend the autocratic Islamic kingdom or even to come to its aid. True, the US sells a lot of weapons and weapons systems to the Saudis, including for its brutal and genocidal war on its impoverished neighbor to the south, Yemen, whose Houti leaders are claiming to have been the authors of the recent drone attack on Saudi refineries. But if anything, those US weapons sales have simply exacerbated instability in the region by encouraging the intensification of the Saudi-Yemeni war. It would be the height of irony if those weapons sales, by provoking a Houti reaction, led to the US becoming embroiled in yet another endless war with another Middle Eastern country, this time Iran, a country twice the size of Iraq, and with a far better equipped and motivated military, and which backs the Houtis in Yemen.

With no treaty obligations to meet, no "honor" to defend, not even any economic reason to retaliate against Iran, and moreover, with no real proof that Iran did anything more than the US has been doing that is supply weapons to one of the antagonists in the conflict it is absurd for the US to be readying its military to launch a war against Iran over an issue like this.

Looked at objectively, if Iran were behind the Houti drone attack on Saudi oil refineries, it is likely a logical response to the US sanctions that have been imposed on Iranian oil -- sanctions which have virtually shut down Iranian sales of its primary export. The US has not only blocked Iranian ships, for example orchestrating the British impounding of an Iranian tanker in Gibraltar, but has blocked banks even European banks from handling the dollar-based financial transactions required for Iranian oil sales. If Iran cannot sell its oil on the global market, it is understandable why Teheran might support action by a third party (Houti forces in Yemen for example) to prevent Saudi Arabia from being able to sell oil either.

The answer to this mess in the Persian Gulf then is clearly not for the US to "lock, load" and then attack Iran, but to stop providing bombs, anti-personnel weapons, and guidance and intelligence to Saudi forces attack Yemen, and to negotiate with Iran to reach an agreement with that nation on all the issues in dispute between Washington and Teheran.

President Bone Spur has said all the way back to his days campaigning for the White House that he wants US troops out of the Middle East. Three years into his troubled and chaotic presidency, he has so far done nothing to achieve that, with US troops still lodged in Syria and Iraq, still messing around in Yemen, and even upping the ante with increased bombings and military personnel both uniformed and private contractors in Afghanistan. Now, even after sacking his bellicose National Security Advisor John Bolton, he is talking as if he wants to launch a new US war in the region this time against Iran.

This is not just madness. It is criminal insanity. The US certainly has the power to inflict massive damage on Iran, but not to defeat that country, nor would a US war against Iran achieve Washington's stated goal of "regime change" in this proud country. Indeed, attacking Iran would inevitably have the effect of rallying all Iranians around their government, unpopular as it is among many Iranians. The only beneficiaries of a US war with Iran would be the hard-liners in Iran and the arms industry in the US.

Even Bone Spur himself would be injured, since nearly 20 months to go until the next presidential election, there would be plenty of time for a war with Iraq to go predictably sour for US forces, which have a proven 75-year track record of not winning any wars. It's a record that is likely is likely to be extended significantly if the US goes to war with Iran.

Hopefully this latest threat by our draft-dodging chicken-hawk president is just another case of his blustering "negotiating style," as he often puts it an effort to get his target to buckle and give in to his demands. The problem is, Iran is not like one of those small independent contractors real estate tycoon Trump was fond of stiffing when it came time to pay the bill for work done. It's an ancient, proud country with its own list of needs and a history of 20th-Century humiliation by countries like Britain and the US and its leaders are determined not to allow that humiliation to be repeated in this new century.

It's time for the president to initiate negotiations with Iran, or to call for a regional peace parley in the Persian Gulf region, not to march off to yet another disastrous war there again.

It's time for Trump to earn his "spurs" this time, as president, instead of just relying on them for getting other people do his fighting for him as he did in the case of the Vietnam War.

About the author(s)
DAVE LINDORFF is a member of ThisCantBeHappening!, the uncompromised, collectively run, seven-time Project Censored Award-winning online alternative news site, and is a winner of the Park Center for Independent Media's 2019 "Izzy" award for Outstanding Independent Journalism. His work, and that of colleagues JOHN GRANT, JESS GUH, GARY LINDORFF, ALFREDO LOPEZ, LINN WASHINGTON, JR., and the late CHARLES M. YOUNG, can be at www.thiscantbehappening.net

The Israeli Elections: Who Cares?

How the Houthis overturned the chessboard