Home AMERICAN BRAINWASH Saudi Arabia up in Flames: Riyadh Is Headed for a Major Disaster

Saudi Arabia up in Flames: Riyadh Is Headed for a Major Disaster

On Saturday September 14, Yemen’s Houthi rebels announced that they had conducted a massive attack on several Aramco plants in Saudi Arabia, including the largest oil refinery in the world in Abqaiq, using 10 drones. On Twitter, dozens of videos and photos showed explosions, flames and the resulting damage. 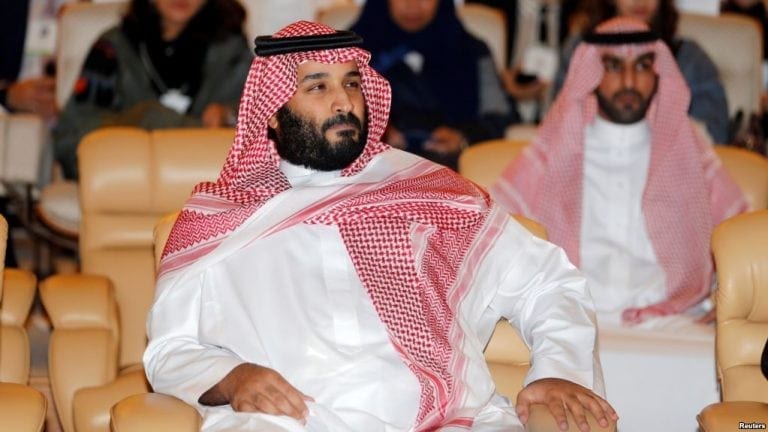 So far, MbS reign has been a total disaster, and a series of internaitonal crimes.

[dropcap]T[/dropcap]he move is part of a retaliatory campaign by the Houthis in response to the indiscriminate bombings conducted by the Saudi air force over more than four years. UN estimates speak of more than 100,000 deaths and the largest humanitarian crisis since the Second World War.

The Saudi kingdom finds itself in an increasingly dangerous situation as a result of the retaliatory capacity of the Houthis, able to inflict severe military and economic damage on Riyadh with their missile forces. Estimates suggest that Riyadh is losing something in the region of $300 million a day from the Houthi attacks. On Sunday September 15, a spokesman for the Saudi oil ministry spoke of damage that is yet to be calculated, possibly requiring weeks of repair. Meanwhile, Saudi oil production has halved following the Saturday attack. With a military budget of $200,000, the Houthis managed to inflict damage numbering in the billions of dollars.

The withdrawal of Egypt and the United Arab Emirates from the conflict in Yemen, driven by their desire to improve relations with Tehran, and the impossibility of the United States intervening directly in the conflict, has created significant problems for the House of Saud. The conflict is considered by the UN to be the largest humanitarian crisis in the world, and Trump has no intention of giving the Democratic presidential contenders any ammunition with which to attack him. Bolton’s dismissal could be one of those Trump signals to the deep state stating that he does not intend to sabotage his re-election hopes in 2020 by starting a new war.

This reluctance by Washington to directly support Israel and Saudi Arabia has aggravated the situation for Riyadh, which now risks seeing the conflict move to its own territory in the south of the country. The Houthi incursions into Saudi Arabia are now a daily event, and as long as Riyadh continues to commit war crimes against innocent Yemeni civilians, the situation will only worsen, with increasingly grave consequences for the internal stability of the Saudi system.

Saturday’s retaliation is the real demonstration of what could happen to the Saudi economy if Mohammed bin Salman (MBS) refuses to sit down and negotiate a way out of one of the worst military disasters of the contemporary era.

The invincibility of US weapons systems is only in Hollywood movies

The Houthis have in recent months managed to strike their targets in Saudi Arabia dozens of times using different aerial means. This highlights once again the total failure of American air-defense systems in the country.

In contrast, the multiple Russian anti-aircraft systems in Syria have achieved a 100% success rate with regard to interceptions, managing to disable (through electronic warfare) all the drones, mortars and missiles launched by jihadists against Russia’s bases in Tartus and Latakia.

Pompeo blames Tehran for the Yemeni attack on Saudi Arabia, of course without offering any proof. Riyadh and Tel Aviv are increasingly isolated in the Middle East. Washington is only able to offer tweets and paranoia about Iran to help its allies, given that a direct intervention is seen as being too risky for the global economy, not to mention the possibility of the conflict becoming a wider regional conflagration that would sink any chance of reelection in 2020 for the present administration.

Trump, Netanyahu and MBS are concocting a witches’ brew that will bring about a disaster of unprecedented proportions to the region. It is only a matter of time before we see the baleful consequences of their handiwork.

A hypothesis to be discarded

There is some talk doing the rounds that the Saudis conducted a false-flag attack on their own oil refineries, a hypothesis that enjoys a superficial plausibility. The resulting increase in the price of oil could be seen as having a positive effect on Aramco’s share price, it is true. But for the reasons given below, this hypothesis is actually not plausible.

The Houthis develop their own weapons, assisted by the Yemeni army. Used drones would cost less than $20,000 a piece. The military embargo on Yemen (enforced by the US and UK) has created a humanitarian disaster, limiting food and medicine. The delivery of weapons by sea therefore seems unlikely. As repeatedly stated by Mohammad Javad Zarif, the foreign minister of Iran, as well as representatives of Ansarullah, Tehran has no influence on the Houthis.

The Yemeni response is part of an increasing asymmetric logic, which has as its primary objectives the halt to Riyadh’s bombings of Yemen by increasing the costs of doing so such that they become unsustainable. The obvious pressure point is the 20 billion barrels in strategic reserves.

There is no need for a false flag to blame Iran for the work of the Houthis. The corporate media is enough to have the false accusations repeated without the help of the Israelis or US-based neocons.

The Saudis are more cautious, even if unable to decide how to proceed. In Yemen, they have no more cards to play: they do not want to sit down and deal with Ansarullah, Tehran is unassailable, while Tel Aviv is pushing for a conflict, with Riyadh offered to be sacrificed.

I have been writing for months that, sooner or later, an event will occur that will change the regional balance in a possible conflict with Iran. This happened on Saturday, when half of Saudi Arabia’s oil production was brought to a halt by an attack.

There could not be any worse news for the neocons, Wahhabis and Zionists. If the Houthis could inflict such damage using 10 drones, then Tel Aviv, Riyadh and Washington must be having conniptions at the thought of what the Iranians would be capable of doing in the event that they themselves were attacked.

Any power (in this case the US and their air-defense systems) and its close ally would do everything to avoid suffering such a humiliation that would only serve to reveal their military vulnerabilities.

Meanwhile, Netanyahu’s visit to Moscow is seen by many in Israel as a failure. It is confirmed in Tel Aviv that the Zionist state’s recent attacks in Syria have been quashed by Russian intervention, sending an unambiguous message to Netanyahu.

Netanyahu and MBS, I reiterate, are heading towards the political abyss. And given their inability to handle the situation, they will do everything in their power to draw Washington into their plans against Iran.

It is all certainly IN vain. But in the coming weeks, I expect further provocations and tensions in the Middle East.

Inside America’s Meddling Machine: NED, the US-Funded Org Interfering in Elections Around the Globe

Indispensable reads: Can Nuclear War With Russia Be Avoided?

Andrey Vajra. Why the U.S. Democrats...