September 22, 2019 8 minutes read
Please make sure these dispatches reach as many readers as possible. Share with kin, friends and workmates and ask them to do likewise.
This essay is part of our special series on disgusting imperialists 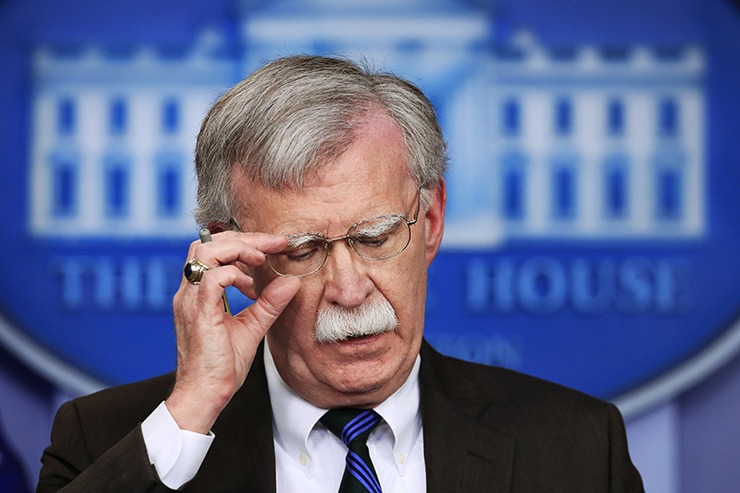 Bolton's firing does not signal a true shift in foreign policy, warns the author. Worse may yet to come. (AP Photo/Manuel Balce Ceneta)

[dropcap]N[/dropcap]ews of US National Security Adviser John Bolton’s departure was followed by hopeful commentary both within the US and abroad that so too would follow the aggressive foreign policy he advocated – particularly in regards to Iran.

However, US foreign policy – including its decades-long belligerence toward Iran – is a function of powerful corporate-financier special interests dominating Wall Street and Washington, with figures like Bolton merely bureaucratic interfaces between these interests, the government, and the public.

While one would hope the news of his departure as National Security Adviser meant a fundamental changing of tack of US foreign policy, it is much more likely an exercise in managing public perception at best – and a cynical bid to bait and switch the public with promises of peace ahead of the next round of US provocations and false flags aimed at triggering wider conflict with Iran.

A Change in Heart Unlikely

One must consider what is more likely – that US foreign policy toward Iran is about to fundamentally change from decades of economic warfare, sanctions, regime change operations, US-sponsored terrorism, lies, deceit, and attempts to trigger all-out war – to an attempt to foster genuine “peace?”

Or that the “firing” of US National Security Adviser John Bolton is merely an attempt to portray the US as attempting to “chose peace” before the next round of US provocations and even false flag operations?

Unfortunately the history of US foreign policy suggests the latter, with US foreign policy papers going as far as admitting to schemes of proposing peace deals with Iran before intentionally sabotaging them – attempting to blame Iran for their failure – all ahead attempts to justify wider conflict with the Iranians.

What is more telling is that the above described scheme was extensively written out in 2009 by the Brookings Institution in their paper, “Which Path to Persia? Options for a New American Strategy toward Iran,” before the administration of then US President Barack Obama proposed and signed onto the Joint Comprehensive Plan of Action (JCPOA) better known as the “Iran Deal.”

...any military operation against Iran will likely be very unpopular around the world and require the proper international context—both to ensure the logistical support the operation would require and to minimize the blowback from it.

The paper laid out how the US could appear to the world as a peacemaker and depict Iran’s betrayal of a “very good deal” as a pretext for an otherwise reluctant US military response (emphasis added):

The best way to minimize international opprobrium and maximize support (however, grudging or covert) is to strike only when there is a widespread conviction that the Iranians were given but then rejected a superb offer—one so good that only a regime determined to acquire nuclear weapons and acquire them for the wrong reasons would turn it down. Under those circumstances, the United States (or Israel) could portray its operations as taken in sorrow, not anger, and at least some in the international community would conclude that the Iranians “brought it on themselves” by refusing a very good deal.

The Iran Deal did indeed make it appear to many as if the US was serious about fostering peace with Iran – granting Tehran a “superb offer” and opportunity to break the cycle of mistrust, conflict, and edge toward war that had begun in 1979.

But just as Brookings policymakers had planned – with the election of US President Donald Trump – accusations of Iran rejecting Washington’s “superb offer” and choosing conflict over conciliation was pushed heavily by the Western media and by 2018 the US withdrew completely from its own “peace deal” based on tenuous accusations.

The media would attempt to frame this in several ways to conceal the continuity of agenda this plan actually represents by claiming a “hawkish” Trump sought to undermine the work of Obama the “peacemaker.”  In reality, both Obama and Trump served as different legs of an addmittedly singular plan.

In the wake of America’s withdrawal from the Iran Deal, what has been essentially a proxy war waged by US forces and their proxies against Iran and its allies across Lebanon, Syria, Iraq, and Yemen for years was escalated. So were attempts to trigger internal strife within Iran itself as well as efforts to provoke an incident in the Persian Gulf with shipping being mysteriously targeted and disrupted – providing Washington with yet another opportunity to ratchet up pressure on Tehran.

Unfortunately for Brookings’ policymakers and the special interests they represent – both US credibility and its power as a global hegemon has faded to a degree that it could neither convince the world Iran was the aggressor, nor push the world into a conflict with Iran by force.

Bolton’s departure is most likely a means of removing the “hawkish” face from what is still essentially a hawkish policy toward Iran – making it in theory more practical to regain a semblance of legitimacy and portray Iran as the aggressor rather than yet another victim of US war propaganda.

Much less likely is that Washington has finally come to terms with the fact that its global primacy is no longer tenable and that now is the time for it to not only cut its losses regarding futile attempts to pursue it, but to pose as the “hero” while dousing fires it itself lit among the long and still growing list of nations the US has targeted in its bid to preserve its hegemonic status.

US Imperialism Continues Everywhere Else

The US occupation of Syria and its attempts to impede security operations by Damascus to liberate Idlib while targeting the Syrian economy to impede reconstruction is directly aimed at Iran – and in turn – at Russia and China – two competitors the US is still determined to undermine, encircle, contain, and if at all possible – overthrow.

The US is still backing increasingly violent protests in Hong Kong, and attempting to trigger similar protests in Moscow.

In essence, all of these conflicts are linked. If they are all linked and still in play, so too is any US bid to continue coercing Tehran and targeting the Iranian government for regime change.

For comparison – the British – whose empire has long since collapsed – are still invested deeply in geopolitical machinations around the globe in a bid to claw back power and influence it had lost during the World Wars. Toward that end, the British have aided and abetted US imperialism ever since – with its troops following the US into virtually every war of aggression fought by the West over the past half century.

The British are deeply invested in regime change in Syria and Iran. The British state is also deeply involved in targeting Beijing and Moscow – including aiding and abetting ongoing efforts to sow political instability in Moscow and Hong Kong. The British government – at immense cost to taxpayers – is even constructing mammoth aircraft carriers – not to defend British shores – but to ply the waters of the South China Sea in a bid to provide the US with an alliance Southeast Asian states have refused to grant Washington.

If the British are this stubborn a half century after the final collapse of their empire – refusing to accept the end of British hegemony and resisting any attempt to adapt their economy and government to a more proportionate and reasonable role upon the global stage – why should any analyst, leader, or policymaker assume the US will be any less stubborn?

Hope is the first step on the road to disappointment. Those hoping the departure of Bolton signals a genuine change in US foreign policy versus Iran are undoubtedly on that road. The US – like a boxer feigning and parrying – is simply setting up its next flurry of punches aimed at Tehran. Ridding the White House of Bolton is simply a means of luring Washington’s opponents into a false sense of security so when the next punch is thrown, it finally connects.
* * *

About the author(s)
Tony Cartalucci is Bangkok-based geopolitical researcher and writer.