Home AMERICAN BRAINWASH The System’s Falling Apart: Were the Dogmatic Marxists Right After All?

The System’s Falling Apart: Were the Dogmatic Marxists Right After All? 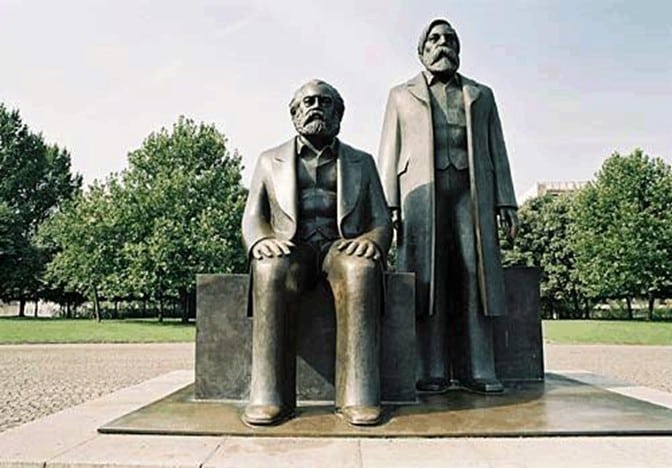 Marx and Engels—the fathers of scientific socialism. So they were correct. after all.

As a young activist in the late 1960s and early ‘70s, I heard plenty of Marxist dogma from left-wing sects that proselytized in major colleges and cities about how “monopoly capitalism is entering its final crisis.” The warnings of apocalyptic collapse were constant. They sounded absurd, more so as years passed with nothing close to a final crackup – no more convincing to me than the Jehovah’s Witnesses at my door with their articles of faith.

Back then, up through the early 1970s, our country’s economy was expanding, the middle class was growing and industrialists largely tolerated unions. US-style capitalism went on to spread globally.

But lately I’ve been wondering whether those Marxists were correct after all, if only a few decades premature. Take a deep look at two pillars of Western capitalism – the United States and the United Kingdom – and you see that there is something graver in today’s political crises than in most past ones.

Both countries are locked in governing crises of historic proportions. On the surface, the issues are Brexit in the UK and Trump’s ego and wall in the US. Yet the roots of the problem go deeper. The problems are structural, starting now from the base of society where you find unprecedented anger, division and despair among the working classes after decades of economic neoliberalism have concentrated wealth toward the top.

Neoliberalism – whereby politicians first and foremost serve corporate interests (with crumbs hopefully “trickling down” to the masses) – went into high gear 40 years ago. It was called “Thatcherism” in the UK and “Reaganomics” in the US. And neoliberalism has been the driving economic ideology ever since, with wealth and income flowing unrelentingly upward even after “the opposition” took power. In the US, we had corporate-friendly “New Democrat” Bill Clinton (NAFTA, Wall Street deregulation, welfare “reform,” mass incarceration); in the UK, they had Tony Blair and “New Labour” (so pro-corporate that Rupert Murdoch endorsed him).

Unlike past governing crises, today’s are not mere factional fights among elites, with the masses watching from the sidelines. Nowadays, the governing factions have to answer to voting blocs that are increasingly angry, intransigent and demanding. All this makes gridlock even more stubborn.

Since naked service to corporate elites and “trickle-down” promises don’t sell anymore to an insecure middle class, right-wing leaders like Trump (and Europeans being cultivated by Steve Bannon) are now “populist” and “anti-elites” – openly tapping into racism while scapegoating immigrants for society’s problems. Instead of “the magic of the free market,” they sell the magic of steel slats.

Meanwhile, usually pliable Democratic leaders in the US must contend with a younger, more multi-racial, increasingly progressive and uncompromising base. Leadership seeks to appease with rhetoric and symbolic gestures, while resisting the base’s demands for far-reaching economic and environmental reforms that conflict with the wishes of the party’s donor class.

Since naked service to corporate elites and “trickle-down” promises don’t sell anymore to an insecure middle class, right-wing leaders like Trump (and Europeans being cultivated by Steve Bannon) are now “populist” and “anti-elites” – openly tapping into racism while scapegoating immigrants for society’s problems...

So Republicans and Democrats go to war over wall-funding, while quietly coalescing on bigger issues such as the perilous, anti-democratic power of Wall Street and the diversion of mostfederal discretionary spending to the unaccountable military-industrial complex.

And the U.S. political system avoids the biggest issue of all – the calamity that gives new reality to the old rhetoric about “capitalism’s final crisis”: human-made, profit-driven climate change that keeps burning hotter while liberal and conservative politicians fiddle. Republicans deny the science; Democratic leaders deny and delay the transformative solutions that are needed – like a “Green New Deal” that would undercut certain corporate balance sheets.

It would be much easier for all to see “the crisis of capitalism” if the poor and working class (and formerly middle class) were uniting in open rebellion against 40 years of neoliberalism. But while working-class people in the US are largely angry at the system and united in their despair about “democracy serving the whole public,” they are divided against each other, often along racial lines.

For some clinging to power atop this apparently crumbling system, stoking white racism and division may be their last, desperate tactic. After Trump, it’s not hard to envision future Republican politicians turning to Fox News-style racism and immigrant-blaming in order to “inspire” the party base and win.

Yet it’s a treacherous tactic, with horrific implications for the future. Today’s economy is allegedly strong (“greatest in history,” says Trump) – but imagine the anger that’s going to hit the fan with the next recession, which is overdue and widely expected.

With our political system in lockdown and our natural world under global threat, we need to look “beyond capitalism” – at least that’s what many Americans under 30 are saying in pollafter poll after recent poll. Young people have never experienced an “economy that works for all.” Whether you call it “post-capitalism” or “social democracy” or “democratic (eco)socialism,” something new and better is needed.

And it’s heartening to see more elected officials thinking about those new directions, including young members of Congress like Alexandria Ocasio-Cortez and Rashida Tlaib. And oldsters like Bernie Sanders and Jeremy Corbyn who recognized the crisis of capitalism before it was cool.

ABOUT THE AUTHOR
Jeff Cohen was director of the Park Center for Independent Media at Ithaca College and cofounder of the online activism group RootsAction.org.

What George Carlin Taught Us about Media Propaganda by Omission