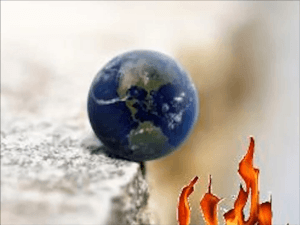 Both the dangers we face from climate change and the remedies we need are much larger than acknowledged by most activists.

DANGERS. The mainstream forecast is millions dead by century’s end. But I expect much worse: the end of life on Earth by 2035 unless we make big changes fast.

Global warming was triggered by human activity, but some of the feedback loops are now independent of humans. (For instance, ice melt exposes darker surfaces which absorb more sunlight, hence more warming.) And these grow exponentially.

In addition, abrupt changes occur when critical levels are passed. For instance, when the Arctic warms enough, it will release its immense frozen store of methane, a greenhouse gas much more potent than CO2. At some point the ecosystem, made fragile by loss of diversity, will collapse as abruptly as a house of cards.

Bill McKibben said that to save life as we know it, oil companies must leave most of their oil in the ground. He didn’t see that in our present economic system, a company can’t just walk away from its assets. 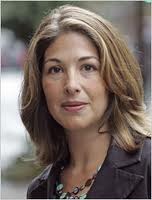 Naomi Klein missed the systemic problem too, in her 2014 book on climate and capitalism. She pointed out symptoms and suggested reforms. But capitalism can’t be reformed, and must be ended. The problem is not just a few bad actors, but capitalism’s basic principle: Every man for himself, and to hell with the commons. Externalities, unmeasured side effects of trade, are borne by community and environment, not buyer and seller; thus capitalism is inherently ecocidal.

The task of saving the world must not be entrusted to the lowest bidder, to self-described “green capitalists,” to people whose real concern is how much they can profit from their contract. Listen instead to nonprofit scientists.

A return to “normalcy” is not possible; our species can no longer survive in selfishness. We are at the end of our 10,000-year adolescence. It is time for revolution, awakening, metamorphosis to a culture of caring and sharing that leaves no one behind. Tell everyone.

2019 Sept 23, version 3.22. Formatted as a leaflet, this essay takes up both sides of a half page. A Spanish translation of version 2.01, by Ulises Eneastro, is available at this link. 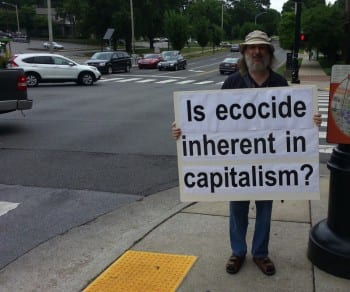 Eric trying to awaken his fellows.

Senior Contributing Editor Eric Schechter (born August 1, 1950) is an American mathematician, retired from Vanderbilt University with the title of professor emeritus. In his retirement, Eric has become a full time activist against capitalism and its nefarious influence on democracy, civil freedoms, equality and global ecology.

Strike for the Environment, Strike for Social Justice, Strike!