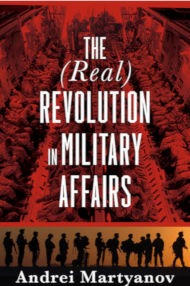 Considerable amounts of ink have been been spent in writings about the Revolution in Military Affairs. It is a concept that claims that new military doctrines, strategies, tactics and technologies would lead to an abrupt and significant change in the conduct of warfare.

U.S. 'experts' tended to use the expression to market expensive new concepts and weapon systems. Network-centric warfare and precision strikes were both predicted to change the way wars are fought. But the U.S. wars on Afghanistan and Iraq demonstrated that there was no such revolution. Even with all its new toys the U.S. failed to win.

Andrei Martyanov's new book is about The (Real) Revolution in Military Affairs. Martyanov was a naval officer in the Soviet and Russian coast guard. He now lives in the U.S. and blogs at the Reminiscence of the Future.

The real revolution in military affairs is the development of new types of weapons by Russia. Weapons which the U.S. can not defeat and to which it has no equivalents. The consequence of the revolution is the loss of the U.S. geo-political supremacy. One cause of this loss is at the core of Martyanov's earlier book LOSING MILITARY SUPREMACY: The Myopia of American Strategic Planning.

The new book takes an expanded view of the situation.

Public pundits in the U.S. have considerable influence over political decisions about war and peace. A huge number of 'experts' in a myriad of special interest think tanks and lobbies put out a steady stream of advice. Unfortunately most of these 'experts' fail to correctly measure geo-political power. They often lack the most basic understanding of military affairs and real wars.

Martyanov explains why the models the 'experts' use fail. He shows how the advantage of one weapon system against another one can be calculated. People who have had a military education know these formulas. Those who only studied political science have likely never heard of them.

The result of such calculations is well expressed in a quote from Admiral Turner who Martyanov cites: "It isn't the number of keels, or size of ships that count. It is the capacity to do what might be decisive in some particular situation."

We don’t need aircraft carriers, we need weapons to sink them with.

The revolution in military affairs the U.S. believed in has largely disappointed. The precision weapon, computers and gizmos have not solved the basic law of war. The enemy always has a vote in the outcome.

In 2018 Russia presented a number of completely new types of weapons - extreme long range missiles, nuclear driven torpedoes and hypersonic systems.  Martyanov shows that these have taken away the invulnerability the U.S. thought to have.  The U.S. has no comparable systems and it is years behind in developing them.

The U.S. war concept in a conventional war is always to first gain air supremacy. Only after that is achieved are the troops supposed to go in. New developments in Russian air and missile defense make it impossible for the U.S. to wage such a war against Russia or whoever else fields such weapons.

Weapons proliferate. Other states may soon have similar capabilities as Russia (and China) are now fielding. They may also decide to develop cheaper and more asymmetric weapons like drones. The Houthi in Yemen used cheap drones and cruise missiles against high value targets which were defended by very expensive but not very capable U.S. air defense systems. The attacks showed that the balance of power in the Middle East has changed.

Martyanov sees the world at the beginning of a new era in which global power will be rearranged towards a multi-polar system. The foundation for that is the real revolution in military affairs that Russia and others created while the U.S. was still busy with telling itself that its power will only ever increase.

In his postscriptum Maryanov states that the U.S. is in reality a power in decline.

Andrei Martyanov's book provides indispensable knowledge for anyone who wants to understand the current geo-political developments.

The (Real) Revolution in Military Affairs is available in paperback and in electronic form. It has 193 pages plus 22 pages of endnotes.

About the Author
"b" is the nom de guerre of MoA's founding editor.

A Precision Strike on US Credibility – Shattering a US Paradigm

How Russia And Iran Beat Their Opponents’ Strategies