Home AMERICAN BRAINWASH Netanyahu on Steroids: What a Gantz-led Government Means for Palestine

Netanyahu on Steroids: What a Gantz-led Government Means for Palestine

September 25, 2019
Please make sure these dispatches reach as many readers as possible. Share with kin, friends and workmates and ask them to do likewise. 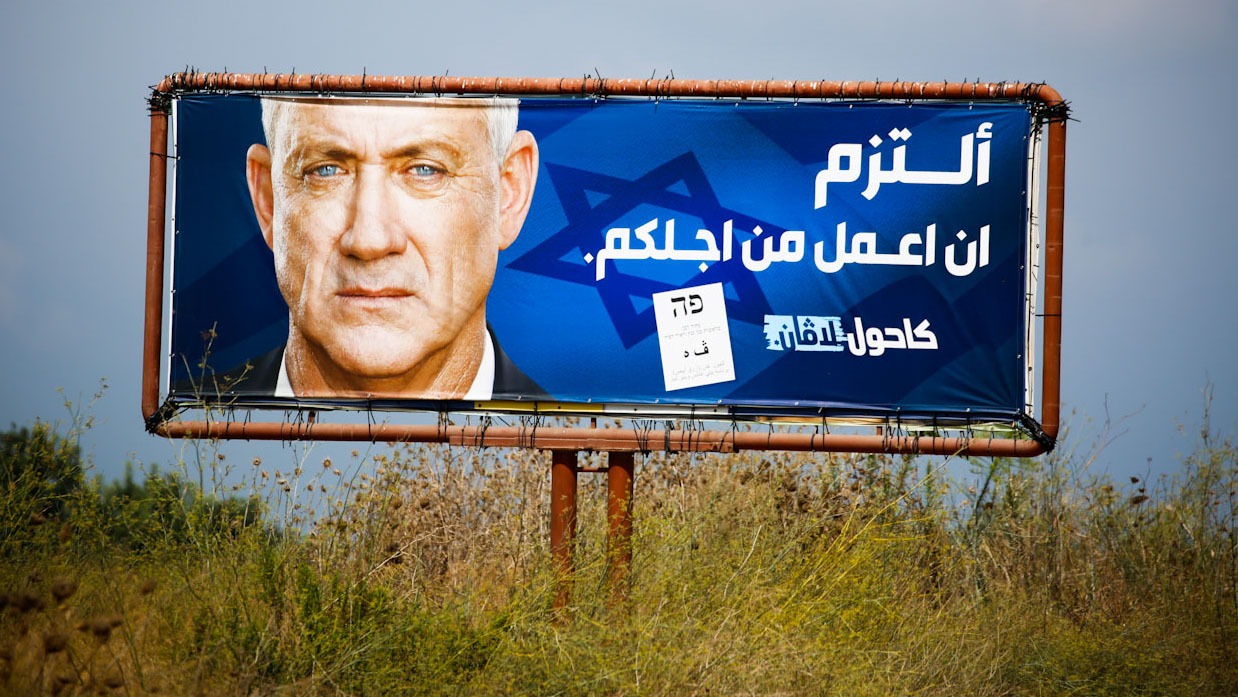 [dropcap]E[/dropcap]xperience has taught Palestinians not to pay heed to Israeli elections. But to every rule there is an exception.

Although it is still true that no Israeli Zionist leader has ever been kind to the Palestinian people, the dynamics of the latest Israeli elections on September 17 are likely to affect the Occupied Palestinian Territories in a profound way.

Indeed, the outcome of the elections seems to have ushered in a new age in Israel, ideologically and politically. But the same claim can also be made regarding its potential influence on Palestinians, who should now brace themselves for war in Gaza and annexation in the West Bank.

Former chief of general staff of the Israeli army, Benny Gantz, who had orchestrated the destructive war on the besieged Gaza Strip in 2014, is likely to be tasked with the job of forming Israel’s new government. Gantz had recently boasted about sending “parts of Gaza back to the Stone Age”.

There is little discussion in Israeli, and, by extension, western media of Gantz’s numerous war crimes during the Gaza war. The focus is mainly placed on the fact that he seems to have finally dislodged Israeli Prime Minister Benjamin Netanyahu from a position he had held for nearly 13 years, a scenario that was, until recently, deemed inconceivable.

A Gantz-led government will possess the needed political legitimacy, popular mandate and strategic tools to achieve what Netanyahu couldn’t: a war on Gaza, and annexation of the West Bank.

The leader of the Kahol Lavan (Blue and White) party had plotted the ouster of Netanyahu back in January 2018, when he formed the Israeli Resilience Party. Following several political mergers and a strong showing in the previous elections in April, the centrist politician has finally edged past Netanyahu’s right-wing Likud party in the most recent elections.

With 33 seats in the Israeli Knesset – compared to Likud’s 31 seats – Gantz now needs a broad coalition to rule Israel. The vehemently anti-Palestinian politician has made it clear that he will not enter into a coalition with the Joint List, the alliance of various Palestinian Arab political parties. The latter has managed to achieve an outstanding 13 seats, making it the third largest political force in Israel.

But, according to Gantz’s previous statements, the inclusion of Arab parties in the coalition is out of the question, despite the fact that Ayman Odeh, the leader of the Joint List, had indicated his willingness to join a Gantz-led government. 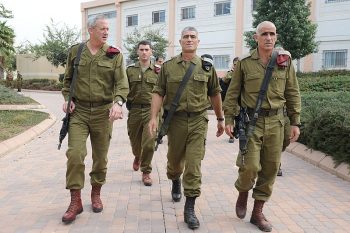 Gantz (left), a hawkish figure who accused Netanyahu of being soft on Palestinians, with his staff in 2014. Armed and ready for action.

It is now likely that Gantz will seek a coalition government that includes the Likud, along with Avigdor Lieberman’s Yisrael Beiteinu. The country’s former ultra-nationalist defense minister, Lieberman, with 8 seats, has restored his previous “kingmaker” status. He, too, is keen on such a coalition. Gantz is open to such a scenario, with one condition: Netanyahu should stay out.

While the “king of Israel” has finally been dethroned, however, Palestinians have little to rejoice over. True, Netanyahu has destroyed any chance of a just peace in Palestine through the entrenching of the illegal military occupation and inhumane siege of the West Bank and Gaza. However, future possibilities are equally, if not even more, grim.

Once upon a time, outright discussion of annexing large parts of the Occupied Palestinian Territories were relegated to the margins of Israel’s political discourse. This is no longer the case. The call for annexing major illegal settlement blocs, along with the Jordan Valley, is now a common demand made by all of Israel’s main political parties, including Gantz’s own.

Gantz, possibly Israel’s next prime minister, has repeatedly made it clear that he would be strengthening, rather than dismantling, the illegal settlements in the West Bank, and has even attempted to take ownership of Netanyahu’s pledge to annex the Jordan Valley.

“We are happy that the Prime Minister has come around to adopt the Blue and White plan to recognize the Jordan valley,” Gantz’s party said in a statement shortly before election day.

The annexation of these areas would amount to illegally seizing more than 60 percent of the West Bank.

Given that Israel has successively normalized the concept of annexation in its own, political discourse, and that it has already received an American nod on the matter, it is then a matter of time before such a step takes place.

The likelihood of it taking place sooner than later is that a broad, center-right-ultranationalist coalition would serve as an insurance to Israel’s leadership, in case of a political or security fallout once the decision is taken and enforced.

That political insurance simply means that no single party or official would bear the blame or shoulder the consequences alone, should Palestinians rebel or the international community push back against the flagrant Israeli violation of international law.

The same logic is applicable to the case of a future war on Gaza.

Israel has been itching for a major military campaign in Gaza since its last onslaught of 2014. Since then, Gaza has been bombed numerous times, and hundreds of innocent lives have been lost. But Netanyahu steered clear of an all-out war, fearing a high death toll among his soldiers and the blame game that often follows such military misadventures. 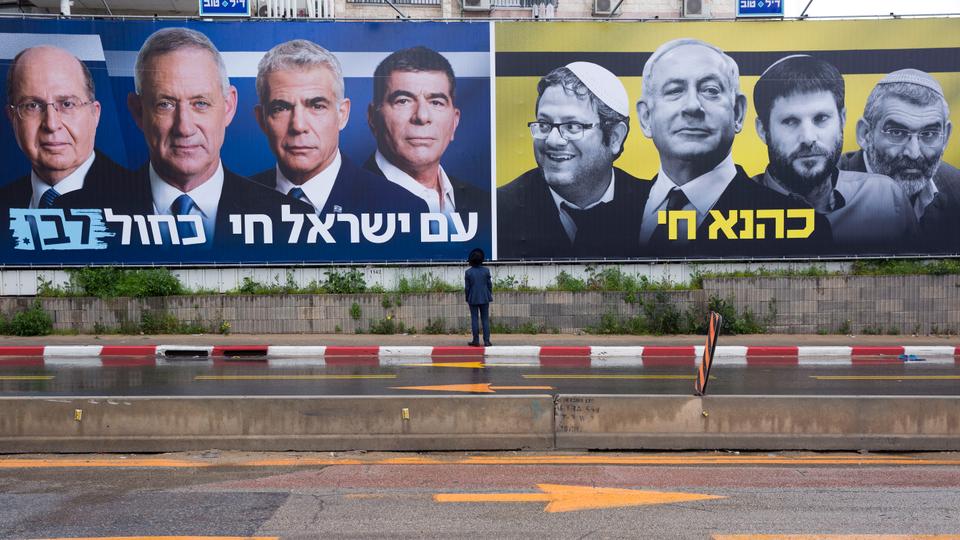 Battle of the billboards: A perplexed Orthodox Jew looks last March at giant rival campaign displays for Gantz and Netanyahu. Is the diference in the details? How long can "western style democracies" continue to offer phony choices? (AP)

Mandated by a large coalition, bringing together Israeli army generals, right-wing politicians and ideologues, Gantz would feel far more empowered to go to war, especially since the former military chief has repeatedly accused Netanyahu of being “weak” on Gaza, “terrorism” and security.

If a future war goes as planned, Gantz would be happy to claim the accolades of victory; if it does not, due to Gaza’s stiff resistance, the political damage is likely to remain minimal.

When it comes to war, Gantz is Netanyahu on steroids. He has participated, orchestrated or led many military campaigns, including ones aimed at suppressing any resistance in Gaza, in Lebanon and during the previous popular uprisings.

For Gantz, war is the answer, as indicated by one of his campaign slogans, “Only the strong survive.”

While it is typical, and understandable, to dismiss all Israeli governments as one and the same, a Gantz-led government will possess the needed political legitimacy, popular mandate and strategic tools to achieve a job that Netanyahu himself couldn’t finish: a war on Gaza, and annexation of the West Bank.

Feature photo | Election campaign billboard showing Blue and White party leader Benny Gantz, in the Arab town of Baqa al-Gharbiyye, northern Israel. Israel faced a choice that many Americans can understand: two corrupt candidates representing terrible options. Change here may again be for the worse, a reflection of a rotten system.  (Mintpress—AP Photo/Ariel Schalit)
About the author(s)
Ramzy Baroud is a journalist, author and editor of The Palestine Chronicle. His last book is ‘The Last Earth: A Palestinian Story’ (Pluto Press, London) and his forthcoming book is ‘These Chains Will Be Broken: Palestinian Stories of Struggle and Defiance in Israeli Prisons’ (Clarity Press, Atlanta). Baroud has a Ph.D. in Palestine Studies from the University of Exeter. His website is www.ramzybaroud.net.

No, Srebrenica did not ‘inspire’ Christchurch