[dropcap]Q[/dropcap]uestions are being raised following the shooting death of Joshua Brown, a key witness in the trial of Amber Guyger, just two days after the former Dallas police officer was sentenced to ten years in prison. Guyger was convicted of murder last Tuesday and sentenced on Wednesday for shooting and killing Botham Shem Jean in his apartment on the night of September 6, 2018 while she was off duty. 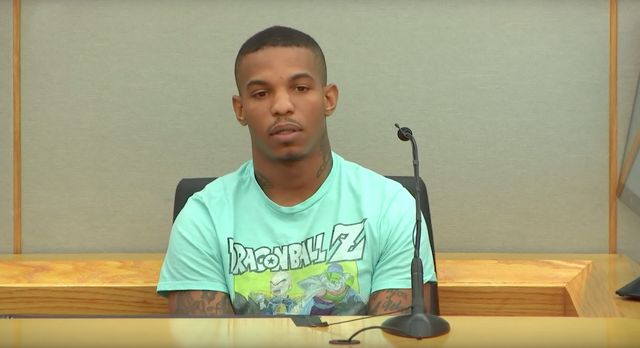 Brown, 28, who had lived across the hall from Jean in the South Side Lofts, was found with multiple gunshot wounds to his lower body by police at 10:30 p.m. on Friday in the parking lot of his new residence at the Atera Apartments in Dallas. Brown died of his injuries later at Parkland Memorial Hospital.

Brown had given critical testimony in the trial of Guyger that led to her conviction. Guyger said she mistakenly took Jean’s apartment for her own and then shot him thinking he was a burglar. However, Brown, who arrived home at approximately the same time as Guyger entered Jean’s apartment, said that he heard the off-duty officer and Jean talking to each other like they were meeting by “surprise.” Brown said gunshots rang out “right after.”

Joshua Brown testifying during the trial of Amber Guyger

Dallas police have so far released very few details about their investigation into Brown’s murder. It has been reported that witnesses told police they saw a silver, four-door sedan speeding away from the Atera Apartment parking lot immediately following the shooting.

Attorney Lee Merritt wrote in a Facebook post Saturday night that Brown “was ambushed at his apartment complex as he got out of his car and shot at close range.” Merritt also said he was told by the medical examiner that Brown had been shot in the mouth and chest, a claim that was later disputed by Dallas County Judge Clay Jenkins.

Merritt also tweeted of Brown, “He had no enemies. He worked for a living. We need answers.” The Dallas County Medical Examiner’s office did not respond to requests for additional information on Brown’s death and said an autopsy would be available in 90 days.

The fatal shooting in the chest of 26-year-old Jean, a black man, by white off-duty police officer Guyger and her sentencing to ten years in prison by a black judge—especially given Guyger’s “mistaken apartment” defense—had already generated national attention as a rare conviction of a police officer for murder, which resulted in a lenient sentence.

Guyger, who had been an officer for four years, was fired by the Dallas Police Department shortly after the incident and was then charged with one count of murder by a grand jury. She will be eligible for parole in five years.

The conclusion of the trial also drew attention when the younger brother of the victim, 18-year-old Brandt Jean, requested and was granted permission to embrace Guyger in the courtroom saying, “I forgive you.” This was then followed by an embrace from Judge Tammy Kemp, who also gave Guyger a copy of the Bible.

Led by Texas Republican Senator Ted Cruz, who called the courtroom hugs of Guyger an expression of “Christian love,” the political establishment hoped that heightened social tensions in Dallas and other cities across the country would decrease.

However, with the murder of Brown reigniting public concerns, Dallas Mayor Eric Johnson urged calm. “Until we know more about this incident, I encourage everyone to refrain from speculation,” Johnson said. It has been reported that a private citizen has offered a $100,000 reward for information leading to the arrest of Brown’s killer.