Ramin Mazaheri for The Saker Blog 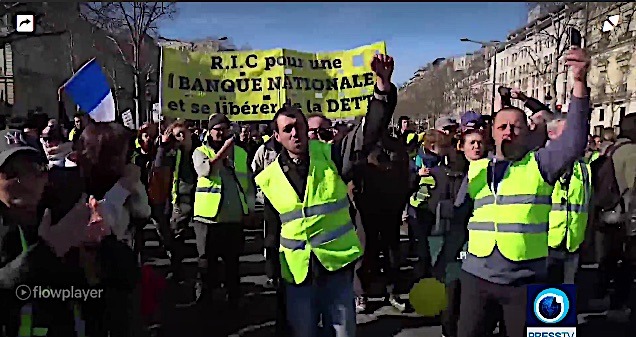 The Yellow Vests forced the French government to not present an austerity-laden annual budget for the first time in a decade.

You should be saying, “Wow, that is a historic achievement.”

Please be clear: this is joyous, uplifting, pro-democracy, once-in-a-decade good news! An end to austerity is why France elected Francois Hollande in 2012, whose slogan was, “The change is now” – the “change” was away from far-right, neoliberal austerity.

The entire history of austerity is pretty pathetic, and I have covered it daily from the beginning:

It was first a screaming conservative-capitalist reaction to the huge plunge in global economic growth. When the hysteria wore off and some sort of logical, verbal explanation became required, they decided it was necessary to appease the “confidence fairy” of investors. When people tired of belt-tightening to avoid giving financial speculators a bit of indigestion, it became necessary in order to appease Brussels’ totally arbitrary “3% fiscal deficit rule”. And then…people just stopped talking about it altogether, as I wrote. Austerity went on so long it was just viewed as unstoppable and vitally necessary – the idea of a spending program instead of spending cuts stopped being discussed after Marine Le Pen lost the presidential election. Emmanuel Macron’s first budget was the 2nd-harshest in postwar French history.

Given these reminders, we should ask in 2019: How many millions and millions of people have marched in France in the past nine years to end austerity, either openly or indirectly?

They all failed – the Yellow Vests did not.

Furthermore, anyone who thought the Yellow Vests are useless have been proven totally wrong. The Yellow Vests have proven themselves to be more powerful than any other group – unions, NGOs, political parties, and also even Brussels, central bankers, the investor class, the mainstream media – because the French government ultimately bowed to the demands of the Yellow Vest demands and not those other groups.

Austerity: same as it ever was… only effective at increasing inequality

Budget austerity has three primary components: increased taxes on individuals and households, cuts to government services and decreased taxes on the wealthy and corporations. The goals are, in associated order: to weigh people down with so much debt as to make them fearful & compliant workers & citizens; to achieve the neoliberal/libertarian goal of reducing the government as much as possible, as only the government can provide socio-economic constraints on the 1%; to create profits for the 1%, which are going to “trickle down” at some unknown time (this hype – not hope – has been going on since Ronald Reagan).

What is the problem with austerity?

Well, morally (to take an economic tack never conceived in the West and in non-socialist inspired economies), taxing the poor to feed the rich is simply wrong.

However, putting morality aside, economic austerity is a guaranteed recipe for low growth and especially in the context of a global slowdown. Thus, it is ineffective, wasteful and increases lasting socioeconomic inequalities. 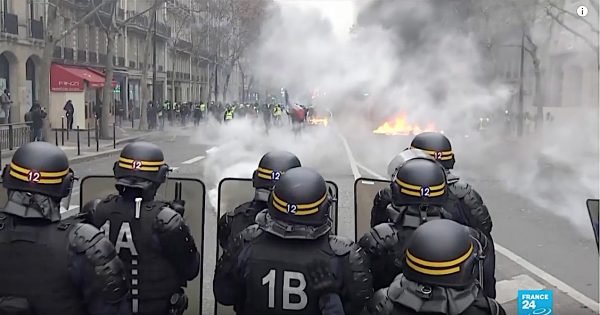 Since Lehman Brothers in 2007 there has been a global economic slowdown, but for some unknown reason I seem to be the only reporter who has talked about the undeniable, factual “Lost Decade” in the Eurozone (2008-17). Annual economic growth averaged 0.6% during this era, a rate worse than either of Japan’s two recent Lost Decades; it’s also 3.5 times less than the global average of 2.1% over this timeframe Thus, the idea that austerity has been a total failure cannot be denied no matter where your ideas lay on the economic spectrum.

We are now widely expecting not just a global economic slowdown but a global economic recession. The blame is absurdly laid at the feet of China – for daring to grow at 7% instead of 8% – when the obvious culprit is the enormous stagnant backwater that is Europe. They remain the weakest leak in the global macro-economy.

You are crazy if you think Yellow Vests – down to each man and woman – do not recognise these economic realities: they are living it. They even articulate it better than I do half the time.

Prior to the budget news, I wrote how the Yellow Vests had already stopped another far-right goal: the privatisation of Paris’ three airports. That’s a € 10 billion deal.

The total tax cuts are only €10 billion as well. €1 billion were the result of lowering the corporate tax rate 2% – no matter what, tax cuts for the wealthy/corporations occur with or without austerity.

The reality is that austerity continues, and I’ll explain why: Essentially, Macron didn’t want to waste his tiny amount of political capital by fighting for the small prize of austerity cuts. A much more lucrative prize – for the bosses and stockholders – is if he can successfully push through his backdoor raising of the retirement age to 64 as well as the shift to a universal, one-size-fits-all retirement system which even the mainstream media calls “radical”. And then after that, another radical reform to the unemployment system. 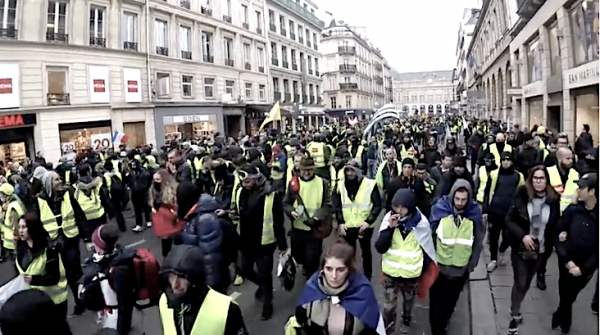 These reforms will effectively redistribute upwards hundreds and hundreds of billions in the medium term, and they gut what I call “the French bad example” – France’s social safety net is a lot like a Scandinavian country despite also being a Western imperialist nation.

Macron has now backed down on privatizing more state assets (which was done the most under the recently departed Jacques Chirac) and on an austerity budget – can the Yellow Vests stop his most sweeping “deforms” yet? The fights, strikes and protests began last month.

One thing is certain: the Yellow Vests have shown that persistence and bravery counts a lot in any fight.

Because the mainstream media is anti-Yellow Vest and pro-austerity, very few seem to have registered what the Yellow Vests have achieved. It’s surprising, because the word of the decade in France and Europe is undoubtedly “austerity”?

What’s certain is that the Yellow Vests have many goals which go beyond one year and 10 billion euros – regaining sovereignty from Brussels, leaving the Eurozone to gain economic control and, for many, kicking Macron out of office. These are the next, admittedly-huge steps, but the Yellow Vests have undoubtedly had a laser focus on them since last November.

Were you one of the tens of millions of Frenchmen whose life has been worsened by austerity? Thank a Yellow Vest for finally achieving what countless French marches and votes could not.

Empress of Dung at it Again: Rachel Maddow Blames RUSSIA For Ukraine-Gate

The Top Issue for Democratic Voters Is …

The US media blackout on revolutionary uprisings and...

Thought Police for the 21st Century