The CIA has been caught spying on Wikileaks founder Julian Assange. Undercover Global SL, a Spanish security firm, recorded Assange during his stay in Ecuador's London embassy, where he lived under asylum, and then handed over its footage to the CIA. "That firm was contracted by Ecuador to protect the embassy, to protect [Assange], to protect us from [his] persecutors," says former Ecuadorian diplomat Fidel Narváez. "So I find it shocking." Guest: Fidel Narváez, former Ecuadorian diplomat who served at the London embassy while Julian Assange lived there under asylum. 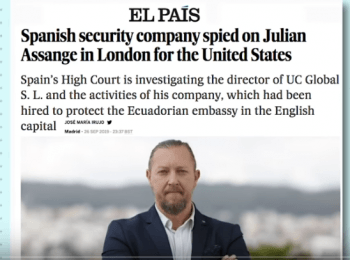 ABOUT THE AUTHOR
Aaon Mate is a leading independent American journalist.