Home AMERICAN BRAINWASH At the Foot of Mammon. What is the Cold Truth. Remember the Illegal US Invasion of Iraq?

At the Foot of Mammon. What is the Cold Truth. Remember the Illegal US Invasion of Iraq? 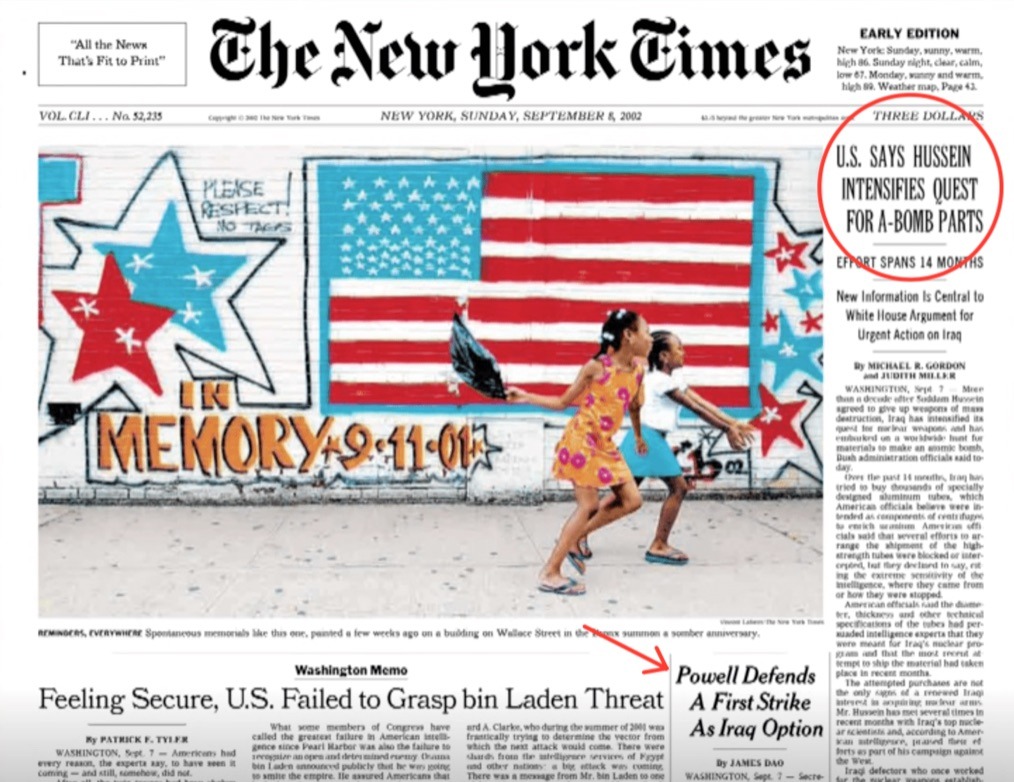 ABOVE: NYTimes front page (8 September 2002): Selling us the Iraq War. The Times and the rest of the media ran thousands of items like this, with practically no dissenting voices, making it a veritable drumbeat for war.

Some say the following quote came from journalist John Swinton (1829-1901), but it matters not who actually said it. The cold hard truth is that it was spoken by someone who worked as a writer for a newspaper, and had a career writing for more than a few. He stated:

“There is no such thing at this date of the world’s history, in America, as an independent press…There is not ONE of you who dares to write your honest opinions, and if you did you know beforehand that it would never appear in print! I am paid weekly for keeping my honest opinion out of the paper I am connected with… The business of journalists is to destroy the truth, to lie outright, to pervert, to vilify, to fawn at the feet of mammon, and to sell his country and his race for his daily bread… We are the tools of rich men behind the scenes. We are jumping jacks, they pull the strings and we dance. Our talents, our possibilities and our lives are all the property of other men. We are intellectual prostitutes!“

We only need go back a few short years to see the utter magnitude of what Swinton was talking about. Remember the illegal and immoral USA invasion and occupation of Iraq? Most of the ‘levers of empire’ were pushed to accommodate that bit of lying, disinformation and half truths. This writer remembers when Phil Donahue had his nightly news/talk show on MSNBC. By February of 2003 or thereabouts, Jeff Cohen, Phil’s producer, recalls how he was told to have TWO pro invasion guests on for every anti invasion guest. Remember, at that time General Electric Corp. owned MSNBC. Yet, that was not enough to satisfy the empire. On February 23 the Donahue show was cancelled, although the ratings were pretty good. You see, by that time, late February, the machine was all ready for the attack. It just needed a few more morsels of propaganda to sink into both the Congress and of course the consumers… Sorry, I mean the citizenry.

This writer was extremely agitated by the high level of Pro invasion info coming over the embedded mainstream print and electronic media. One slight consolation was when C-Span actually ‘did the correct thing’ and showed a Canadian news channel’s coverage of the impending doom. Of course, when the die was cast and Rumsfeld’s famous Shock and Awe campaign began, the three major news talk channels, CNN, MSNBC and FOX, were all over us with cheerleading. FOX was so off the radar that no critique is needed. However, CNN and MSNBC, trying to look like ‘Neutral Journalism 101’, could not contain their peanut gallery mindsets, the one that John Swinton referred to in his famous speech. You had Aaron Brown, Lester Holt and little Katie Couric (of flagship station NBC, owned by GE), along with Brian Williams (later to be outed, for but awhile, for his phony news stories in Iraq) all right there celebrating the ‘Liberators of Iraq’. They all wore their flag buttons on their lapels, and little Katie was filmed strolling through the halls of NBC shouting ‘Marines Rock!’ Of course, Lester Holt did the ‘right (wing) thing’ and now is a respected anchor… so much so that good ole Lester moderates presidential debates. Swinton’s use of the phrase ‘Intellectual prostitutes’ rang true then. 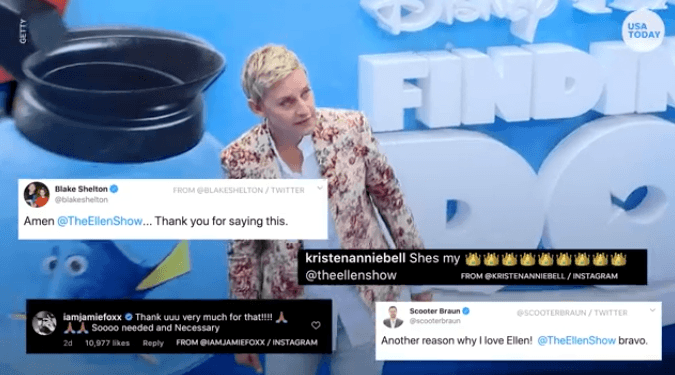 Many of her clueless fans and reactionary fellow celebs applauded Degeneres...

Now we come to a recent bit of disgrace. Ellen Degeneres, the highly celebrated and successful daytime talk show hostess and proud gay woman, was seen sitting with Junior Bush at a Dallas Cowboys game, in the exclusive owner’s box area. She has had Junior on her show to talk about his painting, has visited him at his ranch, and considers him a ‘Nice guy’. Junior has, on record as president, never did squat to help with the AIDs pandemic, and allowed his far right evangelical beliefs to keep him from ever speaking favorably about gay rights etc.

But others put the matter clearly and scathingly, including Susan Sarandon and Mark Ruffalo. 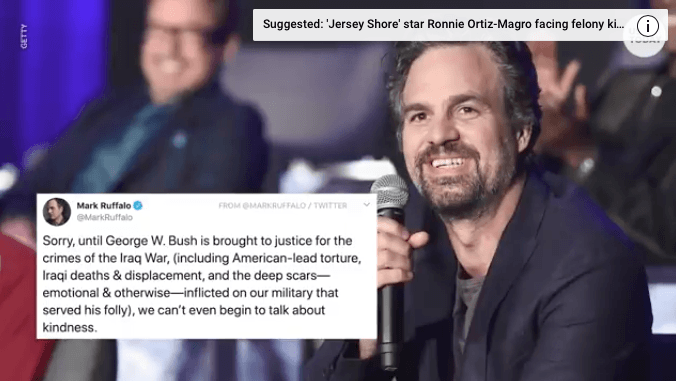 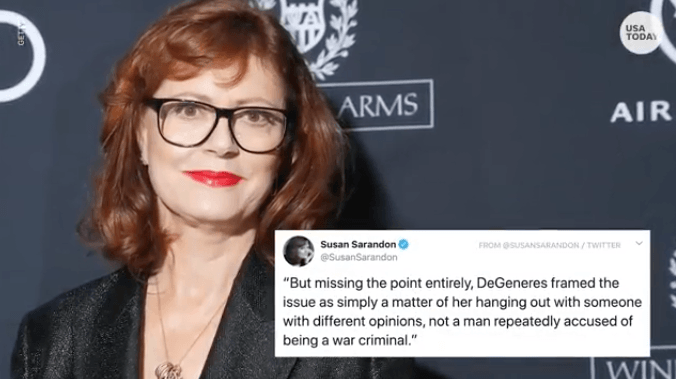 Yet, this openly gay woman, who must have felt alarmed by our illegal invasion (OR DID SHE?), must have had friends who were enraged by that invasion at the time. All the many alternative news blips must have gotten to her eyes and ears, telling her that the Bush/Cheney gang were WAR CRIMINALS! Yet Ms. DeGeneres continues to satisfy the lie which tells us to take a pass on the dastardly things done by the war criminals in the White House. As the war criminal Mr. Obama stated, when in 2008 many of his own party wanted to have hearings on the pre-emptive attack and occupation of Iraq, that it was time to ‘Move forward’. Forward he did by increasing the number of drone murderous assaults by Tenfold! Now that he is out of office, Barack, the ‘Hope and Change’ king, just purchased a home for $8.1 million. Tell that to the suckers who fell for his rhetoric in the Afro American communities.

Anyone but the foolish people who still support Mr. Trump realize that he is as much of a populist as the man he emulates with his body gestures: Il Duce! Nothing ever changes when the majority of working stiffs suck in the foul air that comes from the mouths of the empire’s minions, whether they be presidents, congress people or (so called) journalists and talk show hosts. It is time for those of good conscience to boycott the lot of them!

Behind Hong Kong’s black terror: Deciphering who’s behind the violence leads to a long list of possibilities