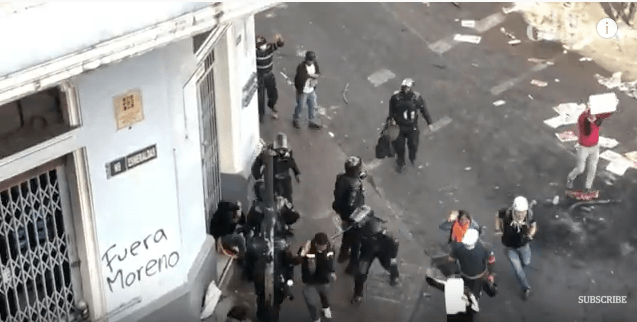 The graffiti says it all: "Out with Moreno!" Let us hope that this temporary concession does not quell the desire—the need—to get rid of Moreno, a traitor thru and thru.

[dropcap]S[/dropcap]unday night all of Ecuador turned into a celebration when authorities announced that Decree 883 that eliminated public oil subsidies would be revoked after eleven days of popular unrest. The information was released after tense talks between the Lenin Moreno Administration and the indigenous movement mainly represented by the Confederation of Indigenous Nationalities of Ecuador (CONAIE).

“As a result of talks, a new decree has been issued invalidating Decree 883,” informed Arnaud Peral, the representative of the United Nations in Ecuador.

“This is evidence that we can do everything if we are united,” said a demonstrator when she heard the news, while a crowd celebrated what they considered a victory over the Moreno Administration.

Possible talks between the stakeholders had been announced the previous day, right before Moreno decreed an indefinite curfew in the city. That day had been marked by a large mobilization in which many groups in the capital city had been gathering in the main area of protest, turning the downtown into streets of barricades faced with the Government’s repression.

The talks were being expected as a decisive moment but in case Moreno did not back down on Decree 883, then CONAIE would continue mobilizing, resulting in the extension of the crisis not only in Quito but throughout the country. In fact, protests were being carried out in different neighborhoods of the capital city, as well as road blocks across the country, “cacerolazos” or pot-banging protests day and night continued, amidst a scenario of a territorial extension of the unrest evidencing that it was not just an indigenous issue or a specific area of the country in conflict.

The Government’s refusal to revoke the decree that eliminated public oil subsidies seemed irreversible. Nevertheless, after talks with the mediation of the United Nations and Ecuador’s Episcopal Conference —despite moments of interruption—, the announcement expected by the whole country finally arrived.

Celebrations were to be expected. The place where repression, burning tires, tear gas bombs and nights of resistance had taken place in Quito became an explosion of honking horns, cheering, and chants of “the people united will never be defeated” rang from trucks loaded with people, taxi drivers, along with people who came from different areas of the city.

Another phase is now being entered with the agreement reached between the Government and people’s mobilization mainly expressed in the indigenous movement. How will the decree be revoked? Will it be replaced by another to be debated later? Moreno promised a discussion after the meeting, while indigenous leaders reiterated that they would only accept a repeal.

Following several days, the night in Quito came to an end amidst celebration. Points about what will happen with the decree are still to be discussed, the same as other aspects signed in the agreement with the International Monetary Fund. And what about the abuses committed by the Government during its repression, which resulted in at least seven deaths according to the latest report issued by the Ombudsman.

SHOULD WE COMPETE WITH CHINA?