Home AMERICAN BRAINWASH Capitalism Must Die: must read for this and every other generation

Sociopolitical activist Stephanie McMillan has authored a superb new book on capitalism, the nemesis of humanity, and everything sentient and non-sentient on this planet of ours. For her title, Stephanie has chosen something apt, that reflects the urgency and seriousness of the topic: Capitalism Must Die!  That's right folks. Die. Not tweak, not reform, and certainly not negotiate with it, or placate it. This monster needs to be dealt with on its own terms, says the author, in the language it understands. So read on, and make sure you get the full benefit of the time Stephanie put into this wonderfully enabling work.

A Basic Introduction: What Capitalism Is, Why It Sucks, and How to Crush It

There's an evil force dominating the people of the world and even destroying the planet itself. This force is our enemy, and the enemy of all life. Before we can defeat it, we have to correctly identify it. We have to understand its underlying structure, how it works, and who controls it, in order to pinpoint its vulnerabilities and effectively fight against it.

This enemy is called global capitalism.

"This is an especially tough message to hustle—that all these feelgood recycling type things individuals are doing mean nothing if we don’t shift systemically. We collectively don’t actually want to hear this message; we are trying to dodge it. But then these clever cartoons come along. And we like cartoons and we read them, and we are shaken up and we can’t just go back to pretending."   —Paxus Calta-Star [book review]

Global capitalism is a system 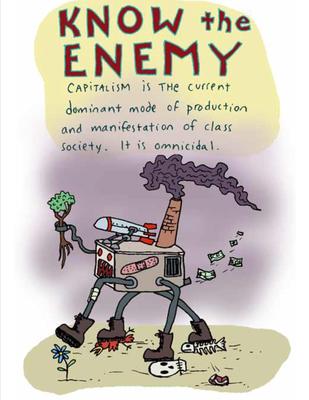 It dominates society economically, ideologically, and politically. It shapes what we think, the ways we spend our time, our moods, our hairstyles, which TV shows we find amusing, whether we prefer popsicles or strawberries, the colors of our t-shirts, who we love, and how we die.

Our livelihoods have been threaded into this system, this giant social machine, like so many wires and tubes, so that we have become as dependent upon it as it is upon us. Mechanics called politicians are appointed to keep the colossus oiled and functioning smoothly. They hire economists to tell them how to do it. They promote culture that pacifies its billions of victims. It hires police and armies to protect it when its victims become disgruntled.

This exploitation machine has taken over all our lives and spans the globe. It converts human labor and the natural world into surplus value, in the pursuit of profit. A few people own it. The rest of us are its fuel.

Its complexity has become a liability to itself, and abrupt simplification is immanent. It’s about to downsize, hard. Some people hope and pray for its collapse. But it will not collapse. The machine will be simplified, but it will still run.

Unless we destroy it, capitalism will destroy the world.

You can download the full book here, and then decide if you wish to contribute to Stephanie's work. Either way, do read the book. And take action.

Published under the Creative Commons license. Available for download (15MB) in PDF HERE.  Second Edition 2015, INIP, 248 pages. “Capitalism Must Die!” is also available as a full-color ebook here: gum.co/capitalismsucks (You choose the price).  A paper copy may be purchased directly from Ms. McMillan here, or from AbeBooks.

Why Withdrawing US troops from Northern Syria is GOOD