A Dispatch from Telesur

Austerity regime drivers in various nations—from Honduras to Ecuador and now Chile—are beginning to harvest the inevitable storm of rejection from the masses after pushing the disenfranchised way too far.  Is this a glimmer of a Latin American correction to the Washington instigated shift to the right?

ABOVE: Protesters vent their fury on Santiago's metro. Years of abuses and betrayals, by both the US-backed rightwing Sebastian Piñera (the current president), and the centrist-corporatist Michele Bachelet, have created an explosive situation, as the Chilean political establishment continues to push neoliberalism down the people's throats.

Chilean President Sebastian Piñera announced Friday night a state of emergency for the provinces of Santiago and Chacabuco.

The measure was taken to control protesters who have been demonstrating all this week against the increased Metro fare. Demonstrations and vandalism in the capital of Santiago have escalated Friday, as have national police repression against the mainly student protesters. The president said the state of emergency will be in place for these areas for the next 15 days, with a possible extension.

#INPICTURES | Hundreds of thousands demonstrate in #Barcelona on the fifth day of protests over the jailing of Catalan separatist leaders. #BarcelonaProtests #Catalunya

"We are taking this measure to assure public order and public safety in Santiago and to protect public and private properties," announced Piñera in a brief press conference on Friday night in which he declared the state of emergency.

The president claimed that protesters "want to destroy the Metro and don't respect their fellow country people. In a rule of law there is no room for vandalism that we've seen in the past few days." 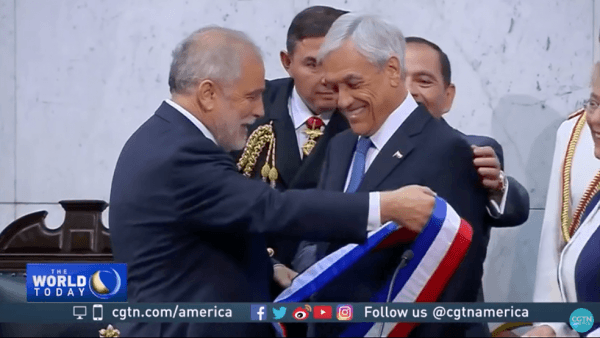 Chicago boys admirer Sebastian Piñera, one of Chile's few billionaires, receiving the presidential sash for the second time in the last 20 years. Something is awfully wrong with this country.

At the end of his statement Piñera said that his government "will call for dialogue with organizations to discuss the price of the Metro, which we understand affects many people." State of emergencies allow the executive to militarize the designated areas and limit the public right to assembly and protest.

Just prior to the president's communique, heavy fires consumed the building of the electricity distribution company, Enel, located in the center of Santiago. The Plaza Italia, a typical protest center, was closed to traffic with barricades of metal fences with some bonfires burning.

As protesters declared a 'fare dodging' protesting, refusing to pay the new Metro rate that increased to about US$1.20, the city suspended all Metro services until at least Monday.

In a Friday statement, the influential Valparaiso Union declared a general strike.

"With the nerve of continuing to finance those who profit from public transport, the government ... is resorting to police repression worthy of dark times in the history of our country," said the union regarding police repression of protesters.

"Santiago is not all of Chile and today the regions have to deal with the rise in electricity, fuel, shortages and poor water quality. We want the political class to understand that we are all Chile and that the solution to these injustices requires the complete transformation of the ​​​​​​​economic model," the union stated.

The members rejected the "endless social, economic and labor injustices that afflict hardworking people" and because of that they were announcing the general strike. The precise dates of the strike were not clear.​​​​​​​

BELOW: In 1973, Chile's "way to socialism" was cut short by a coup sponsored by the US and carried out with the support of the country's conservatives, today behind the current president, Sebastian Piñera. The government of Dr Salvador Allende had been under severe economic sanctions and internal sabotage, all intended to make "the economy scream," thereby facilitating a military coup.

ABOUT THE AUTHOR
Telesur (stylised as teleSUR) is a Latin American terrestrial and satellite television network headquartered in Caracas, Venezuela and sponsored primarily by the government of Venezuela,[1] with additional funding from the governments of Cuba, Nicaragua, Uruguay, and Bolivia.[2] It was launched in 2005, under the government of Hugo Chávez, with the aim of being "a Latin socialist answer to CNN".[1]

Hillary continues to catch opprobrium, even from Dem loyalists