Home AMERICAN BRAINWASH The Unasked Question “How many more billionaires can civilization sustain before it collapses?”

The Unasked Question “How many more billionaires can civilization sustain before it collapses?”

There is no question that we crossed the Rubicon into a world where extreme wealth inequality is corrupting world governments and destroying the balance of nature. How many more billionaires can civilization sustain before it collapses?
The New York Times recently asked each of the Democratic primary candidates for President a series of identical questions. The last question on their list was, "Does anyone deserve to have a billion dollars?" 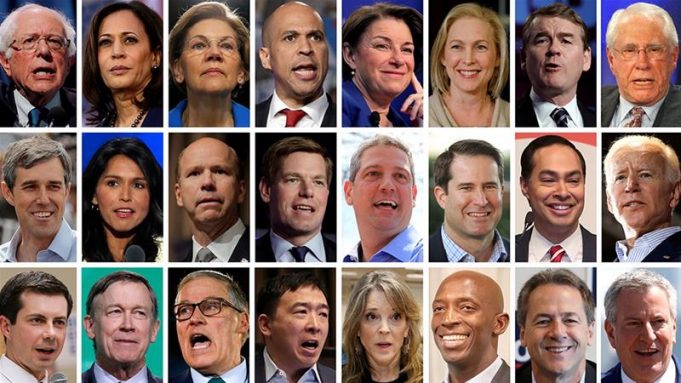 ABOVE: The Democrat party mob for 2020. Many are there simply to dilute Sanders, who needs no help in diluting himself.  "Important questions about wealth inequality and its impact on the environment are not being asked to the Presidential Candidates"

The trivial framing of that question bypassed the grave urgency for asking it in the first place. In a variant form of the question the Times was essentially asking, "Isn't it OK to be a billionaire if you played by the rules and worked hard to earn it?"

The wording of the question pre-supposes that the laws and social rules in place, by which a person may accumulate a billion-dollars, are fair and open to anyone. It ignores whether inherited wealth is also deserved. Most importantly, it treats wealth as if it is only a money count and not a measure of privilege and social power. By doing so, the question as it was posed ignored the essential problem that extreme private wealth is toxic to human society regardless of a person's character or how they obtained it.

A more salient question would have been, "How many more billionaires can this human society sustain before it collapses?

In the 50,000-year history of human civilization, the concepts of private ownership and private wealth are recent developments. The full ramifications of these constructs on our social cohesion and collective welfare are still being revealed. The written history of civilizations offers no comfort. There are no examples of a happy, stable society where extremes of wealth inequality existed. The lessons of history seem to be that a suitable balance of power is required to sustain a healthy and stable society. Human populations simply cannot tolerate distributions of wealth/power that either force unnatural equality or permit unlimited extremes of private wealth.

There is no question that we crossed the Rubicon into a world where extreme wealth inequality is corrupting world governments and destroying the balance of nature. The questions we should be asking candidates for President and all our elected officials are, "What are your plans to rebalance the distribution of wealth and social power in America?" And then the follow-up question, "What are you going to do to stabilize and rebalance the Earth's damaged ecology?"

ABOUT THE AUTHOR
Brian Lynch is a retired social worker who worked in the areas of adult mental health and child protection for many years. His work brought him into direct contact with all the major social issues of the day and many of our basic social institutions such as law enforcement, schools, hospitals, welfare agencies and private social service providers on both a local and state levels.  This was a privileged vantage point for him to observe every level of human ecology, from the lives of individuals to the operations of government institutions. He was struck by the impact of state and federal policies on the lives of ordinary people, for better or worse. Political conflict and the clash of ideologies has real, observable and sometimes devastating consequences. He now writes and blogs on topics that relate to his social observations.