The Putin-Nazis Are Coming (Again)!

October 21, 2019 10 minutes read
Please make sure these dispatches reach as many readers as possible. Share with kin, friends and workmates and ask them to do likewise. 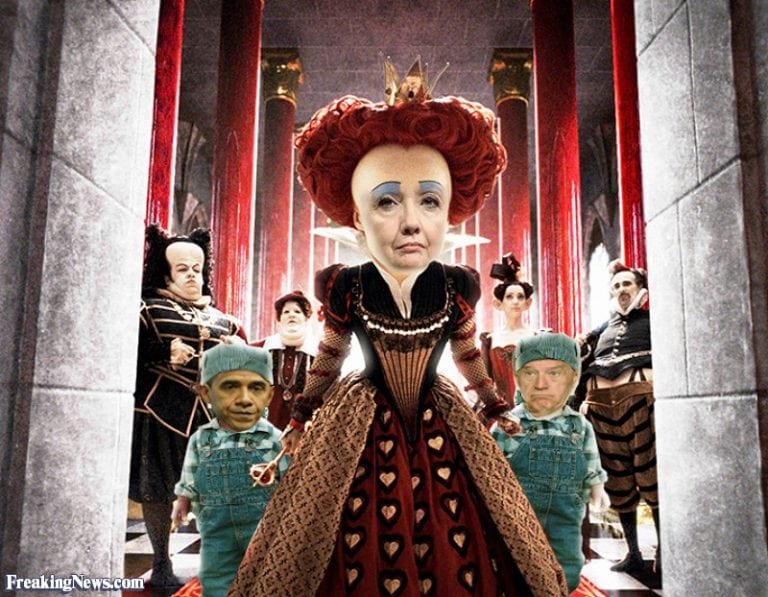 Little doubt by now that Hillary Clinton has been one of the most nefarious characters (in a long list) to occupy positions of power in the American plutocracy.

[dropcap]S[/dropcap]o, it looks like that’s it for America, folks. Putin has gone and done it again. He and his conspiracy of Putin-Nazis have “hacked,” or “influenced,” or “meddled in” our democracy. Unless Admiral Bill McRaven and his special ops cronies can ginny up a last-minute military coup, it’s four more years of the Trumpian Reich, Russian soldiers patrolling the streets, martial law, concentration camps, gigantic banners with the faces of Trump and Putin hanging in the football stadiums, mandatory Sieg-heiling in the public schools, National Vodka-for-Breakfast Day, death’s heads, babushkas, the whole nine yards.

We probably should have seen this coming.

That’s right, as I’m sure you are aware by now, president-in-exile Hillary Clinton has discovered Putin’s diabolical plot to steal the presidency from Elizabeth Warren, or Biden, or whichever establishment puppet makes it out of the Democratic primaries. Speaking to former Obama adviser and erstwhile partner at AKPD Message and Media David Plouffe, Clinton revealed how the godless Rooskies intend to subvert democracy this time:

“I’m not making any predictions, but I think they’ve got their eye on somebody who is currently in the Democratic primary and are grooming her to be the third-party candidate.”

She was referring, of course, to Tulsi Gabbard, sitting Democratic Member of Congress, decorated Major in the Army National Guard, and long shot 2020 presidential candidate. Apparently, Gabbard (who reliable anonymous sources in the Intelligence Community have confirmed is a member of some kind of treasonous, Samoan-Hindu, Assad-worshipping cult that wants to force everyone to practice yoga) has been undergoing Russian “grooming” at a compound in an undisclosed location that is probably in the basement of Mar-a-Lago, or on Sublevel 168 of Trump Tower.

In any event, wherever Gabbard is being surreptitiously “groomed” (presumably by someone resembling Lotte Lenya in From Russia With Love), the plan (i.e., Putin’s plan) is to have her lose in the Democratic primaries, then run as a third-party “spoiler” candidate, stealing votes from Warren or Biden, exactly as Jill Stein (who, according to Clinton, is also “totally a Russian asset”) stole them from Clinton back in 2016, allowing Putin to install Donald Trump (who, according to Clinton, is still being blackmailed by the FSB with that “kompromat” pee-tape) in the White House, where she so clearly belongs.

Clinton’s comments came on the heels of a preparatory smear-piece in The New York Times, What, Exactly, Is Tulsi Gabbard Up To?, which reported at length on how Gabbard has been “injecting chaos” into the Democratic primaries. Professional “disinformation experts” supplied The Times with convincing evidence (i.e., unfounded hearsay and innuendo) of “suspicious activity” surrounding Gabbard’s campaign. Former Clinton-aide Laura Rosenberger (who also just happens to be the Director of the Alliance for Securing Democracy, “a bipartisan transatlantic national security advocacy group” comprised of former Intelligence Community and U.S. State Department officials, and publisher of the Hamilton 68 dashboard) “sees Gabbard as a potentially useful vector for Russian efforts to sow division.”

The Times piece goes on to list an assortment of unsavory, extremist, white supremacist, horrible, neo-Nazi-type persons that Tulsi Gabbard has nothing to do with, but which Hillary Clinton, the Intelligence Community, The Times, and the rest of the corporate media would like you to mentally associate her with. Richard Spencer, David Duke, Steve Bannon, Mike Cernovich, Tucker Carlson, and so on. Neo-Nazi sites like the Daily Stormer. 4chan, where, according to The New York Times, neo-Nazis like to “call her Mommy.”

In keeping with professional journalistic ethics, The Times also reached out to experts on fascism, fascist terrorism, terrorist fascism, fascist-adjacent Assad-apologism, Hitlerism, horrorism, Russia, and so on, to confirm Gabbard’s guilt-by-association with the people The Times had just associated her with. Brian Levin, Director of the CSU Center for the Study of Hate and Extremism, confirmed that Gabbard has “the seal of approval” within goose-stepping, Hitler-loving, neo-Nazi circles. The Alliance for Securing Democracy (yes, the one from the previous paragraph) conducted an “independent analysis” which confirmed that RT (“the Kremlin-backed news agency”) had mentioned Gabbard far more often than the Western corporate media (which isn’t backed by anyone, and is totally unbiased and independent, despite the fact that most of it is owned by a handful of powerful global corporations, and at least one CIA-affiliated oligarch). Oh, and Hawaii State Senator Kai Kahele, who is challenging Gabbard for her seat in Congress, agreed with The Times that Gabbard’s support from Jew-hating, racist Putin-Nazis might be a potential liability.

“Clearly there’s something about her and her policies that attracts and appeals to these type of people who are white nationalists, anti-Semites, and Holocaust deniers.”

But it’s not just The New York Times, of course. No sooner had Clinton finished cackling than the corporate media launched into their familiar Goebbelsian piano routine, banging out story after television segment repeating the words “Gabbard” and “Russian asset.” I’ve singled out The Times because the smear piece in question was clearly a warm-up for Hillary Clinton’s calculated smear job on Friday night. No, the old gal hasn’t lost her mind. She knew exactly what she was doing, as did the editors of The New York Times, as did every other establishment news source that breathlessly “reported” her neo-McCarthyite smears.

As I noted in my previous essay, 2020 is for all the marbles, and it’s not just about who wins the election. No, it’s mostly about crushing the “populist” backlash against the hegemony of global capitalism and its happy, smiley-faced, conformist ideology. To do that, the neoliberal establishment has to delegitimize, and lethally stigmatize, not just Trump, but also people like Gabbard, Bernie Sanders, Jeremy Corbyn … and any other popular political figure (left, right, it makes no difference) deviating from that ideology.

In Trump’s case, it’s his neo-nationalism. In Sanders and Corbyn’s, it’s socialism (or at least some semblance of social democracy). In Gabbard’s, it’s her opposition to the Corporatocracy’s ongoing efforts to restructure and privatize the Middle East (and the rest of the entire planet), and their using the U.S. military to do it.

Ask yourself, what do Trump, Sanders, Corbyn, and Gabbard have in common? No, it’s not their Putin-Nazism … it’s the challenge they represent to global capitalism. Each, in his or her own way, is a symbol of the growing populist resistance to the privatization and globalization of everything. And thus, they must be delegitimized, stigmatized, and relentlessly smeared as “Russian assets,” “anti-Semites,” “traitors,” “white supremacists,” “fascists,” “communists,” or some other type of “extremists.”

Gabbard, to her credit, understands this, and is focusing attention on the motives and tactics of the neoliberal establishment and their smear machine. As I noted in an essay last year, “the only way to effectively counter a smear campaign (whether large-scale or small-scale) is to resist the temptation to profess your innocence, and, instead, focus as much attention on the tactics and the motives of the smearers as possible.” This will not save her, but it is the best she can do, and I applaud her for having the guts to do it. I hope she continues to give them hell as they finish off her candidacy and drive her out of office.

Oh, and if you’re contemplating sending me an email explaining how these smear campaigns don’t work (or you spent the weekend laughing about how Hillary Clinton lost her mind and made an utter jackass of herself), maybe check in with Julian Assange, who is about to be extradited to America, tried for exposing U.S. war crimes, and then imprisoned for the remainder of his natural life. If you can’t get through to Julian at Belmarsh, you could ring up Katharine Viner at The Guardian, which has ruthlessly smeared Assange for years, and published outright lies about him, and is apparently doing very well financially.

And, if Katharine is on holiday in Antigua or somewhere, or having tea with Hillary in the rooftop bar of the Hay-Adams Hotel, you could try Luke Harding (who not only writes and publishes propaganda for The Guardian, but who wrote a whole New York Times best-seller based on nothing but lies and smears). Or try Marty Baron, Dean Baquet, Paul Krugman, or even Rachel Maddow, or any of the other editors and journalists who have been covering the Putin-Nazi “Attack on America,” and keeping us apprised of who is and isn’t a Hitler-loving “Russian asset.”

Ask them whether their smear machine is working … if you can get them off the phone with their brokers, or whoever is decorating their summer places in the Hamptons or out on Martha’s Vineyard.

Or ask the millions of well-off liberals who are still, even after Russiagate was exposed as an enormous hoax based on absolutely nothing, parroting this paranoid official narrative and calling people “Russian assets” on Twitter. Or never mind, just pay attention to what happens over the next twelve months. In terms of ridiculous official propaganda, spittle-flecked McCarthyite smears, and full-blown psychotic mass Putin-Nazi hysteria, it’s going to make the last three years look like the Propaganda Special Olympics.

C. J. Hopkins is an award-winning American playwright, novelist and political satirist based in Berlin. His plays are published by Bloomsbury Publishing (UK) and Broadway Play Publishing (USA). His debut novel, ZONE 23, is published by Snoggsworthy, Swaine & Cormorant Paperbacks. He can be reached at cjhopkins.com orconsentfactory.org.
NOTE

Syria, War, And Elizabeth Warren: More Notes From The Edge Of The Narrative Matrix