The Recipe for Disaster 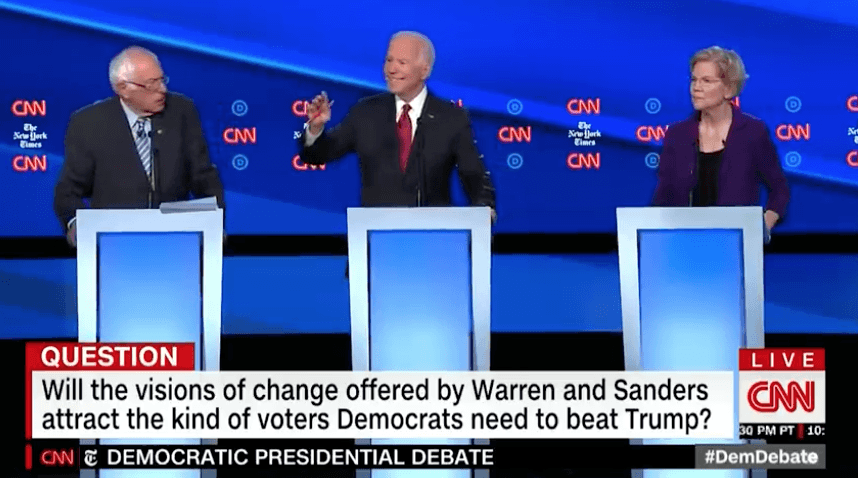 ABOVE: The last debate was a complete joke, and, as pointed out by Jimmy Dore, Sanders characteristically failed to knock Biden out, despite the fact the man has a glass jaw.  In other words Sanders is again throwing the fight while Warren is another Obama in skirts. Expect nothing from the rotten uniparty. Only Gabbard offered some moments of truth, and she's now wearing a bull's eye on her back.

I tune into many cooking shows lately. They all have lots of recipes for just about any kind of dish one can imagine. Well, from our 21st Century Military Industrial Empire's Cookbook the most popular recipe is this one: Take the Two Party/One Party food fight and add a large portion of Mainstream Media Bullshit. Wallah, you will have the finest disaster dish around. With all the many terrible actions by this administration to subjugate we working stiffs, the apologists for empire refuse to mention them and instead focus on constitutional technicalities.Tune in the boob tube and view the Pro Impeachment vs. No impeachment rhetoric concerning this possibly Adhdd ( Attention deficit hyperactivity disorder ) president.

You don't need a degree in psychiatry to notice how Mr. Trump displays many, if not all, of these symptoms. The fact that he continuously repeats a phrase two times is an indication. Yet, his ' condition' is only one part of the complex problem that this Military Industrial Empire has created.

Viewing last week's ( supposed ) Democratic Party presidential debate made this writer contemplate throwing my shoe at the television screen. One solitary aspirant on that stage, Ms. Gabbard, had the audacity to mention ' Wars of regime change' that are synonymous with longstanding US foreign policy... under ALL our previous presidents. The others on that stage, all of them, like ' deer caught in the headlights', just brushed her remarks aside, like an elephant does to a fly on its ass. They were too concerned with ' helping the Kurds from being massacred by the Turks in Syria' . After all, the Kurdish forces were wiping out ISIS from that part of Syria, and Trump gave a ' green light ' to Turkey by pulling US forces out. And that was and IS the new rhetoric, right? Well, not really. You see, if the Bush/Cheney gang did not attack and occupy Iraq an Afghanistan, and the Obama/ Hillary gang did not attack and destroy Libya... there would be NO ISIS or whatever group of Islamic fanatics assembled in that region, including Syria. By  the way, US foreign policy aided and abetted those fanatics so as to see ' Regime change ' come to Syria, a cog in the geopolitical landscape of that Middle East region. Translated: What Ms. Gabbard was stating by her assertions, is that the Two Party/ One Party representatives of this empire ALL have dirty hands in this mess! Mr. Trump is just the latest of many minions of empire!

The Two Party/One Party scam continues so long as the hundreds of millions of working stiffs keep buying into what they are selling. The Republicans always take the lead in protecting the interests of the Super rich. All Trump did was sell his phony populist Kool Aid to the millions of working stiffs by scapegoading the non white poor, playing the terrorist fear card, blessing our militarism... and of course catering to the evangelical anti abortionists. With all the skeletons he has in his closet, if the Democrats ran Donald Duck instead of Mrs. Clinton, with ALL her skeletons, they would have won the White House. Not to be Not to be. The empire needs to keep the suckers ' deaf and dumb' to what it has always been doing: Support the Super Rich and the obscene militarism that protects them. Why is it that, during ALL the Democratic Party's ( so called ) debates, no mention of the fact that over HALF our federal tax dollars goes down the rabbit hole of military spending? You want what now many running for president are trumpeting, Medicare for All ( of course, all but perhaps Sanders are still embedded with keeping private insurance active in it)? Well, cut even but 25% of that money, which would be at least $ 180 billion a year, and you can have comprehensive national health care for all of us. without the private insurers being involved!

Of course, if we want to see real and viable change within our political system, then take ALL the private money OUT of elections by instituting Public funding. Then, the Two Party/One Party scam would end... for good!

Syria, War, And Elizabeth Warren: More Notes From The Edge Of The Narrative Matrix