Home RUSSIA DESK Putin and Erdogan Make Progress in Meeting re Syria, While U.S. Angrily Tells Kurds Not to Deal with Assad or Russia

Putin and Erdogan Make Progress in Meeting re Syria, While U.S. Angrily Tells Kurds Not to Deal with Assad or Russia

After long and difficult talks on Tuesday in Sochi, Putin and Turkish president Erdogan reached an agreement (memorandum of understanding) with respect to the situation in northeast Syria that will require the Kurds to retreat approximately 20 miles back from the Turkish-Syrian border. Both leaders spoke at a press conference after the negotiations. According to the Kremlin website, Putin reiterated support for Turkey protecting its legitimate national security interests near its border, but that ultimately all countries had to respect Syria’s sovereignty as well as the rights of Kurds:

We share Turkey’s concerns about the growing threat of terrorism and ethnic and religious disputes in that region. We believe these disputes and separatist sentiments have been fueled artificially from the outside.

…. Syria must be liberated from illegal foreign military presence. We believe that the only way to achieve strong and long-lasting stability in Syria is to respect the sovereignty and territorial integrity of the country. This is our principled position, and we have discussed it with the President of Turkey. 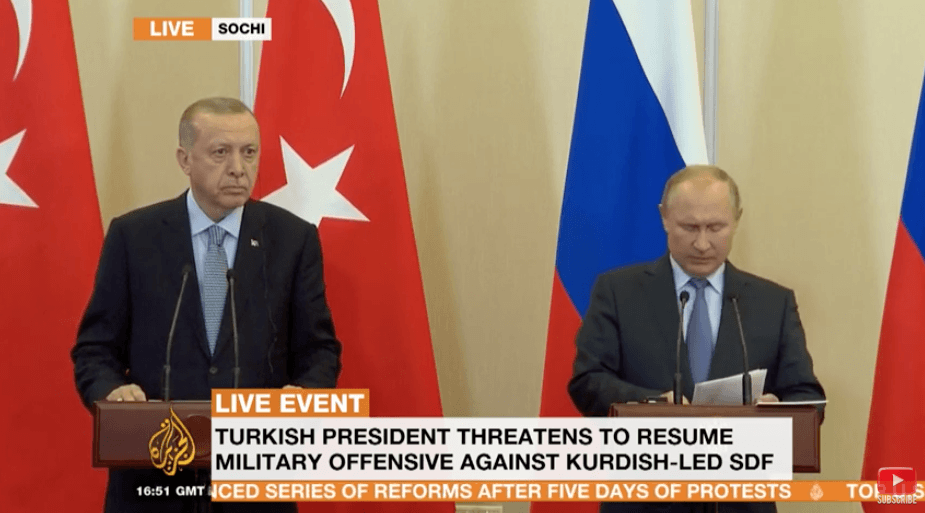 It is important that our Turkish partners share this approach. The Turks and the Syrians will have to protect peace on the border together, which would be impossible without mutually respectful cooperation between the two countries.

In addition to this, a broad dialogue between the Syrian government and the Kurds living in northeastern Syria must be launched. It is clear that all the rights and interests of the Kurds as an integral part of the multi-ethnic Syrian nation can only be fully considered and fulfilled via such an inclusive dialogue.

Putin also said that the return of Syrian refugees must be facilitated and stressed the importance that no actions by any party undermine the work of the constitutional committee which is set to begin its work at the end of the month:

We consider it necessary to continue helping Syrian refugees to return home, which will substantially alleviate the socioeconomic burden shouldered by the countries that agreed to take in Syrians. First and foremost this applies to the Republic of Turkey.

We urge the international community, primarily relevant UN agencies, to be more active in rendering humanitarian aid to all Syrians going home, without any discrimination, politicisation and preconditions….

…. Of course, during our talks with the President of Turkey, we discussed further steps to promote the peaceful political process in Syria, which the Syrians will conduct within the Constitutional Committee in cooperation with the United Nations.

The guarantors of the Astana format have meticulously worked on it for many years.

We believe the situation on the ground must not prevent the long-awaited launch of the committee in Geneva next week – October 29–30. 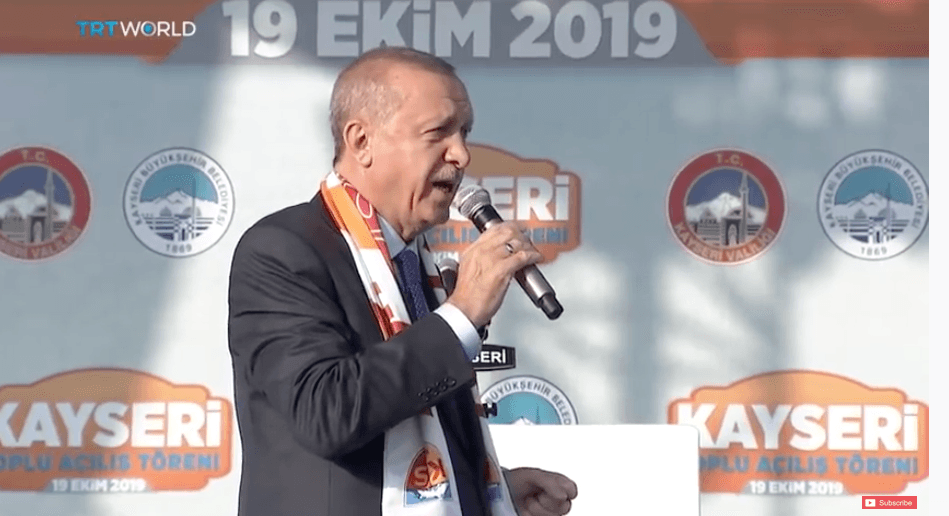 As reported by Russian news agency, Tass, Erdogan stated that Turkey and Russia would embark on joint patrols of the buffer zone Turkey has carved out with its recent military incursion into the northeast of Syria:

SOCHI, October 22. /TASS/. Turkey and Russia will carry out joint patrolling in northern Syria, Turkish President Recep Tayyip Erdogan said on Tuesday on the outcomes of the talks with Russian President Vladimir Putin in Sochi.

“Within 150 hours, [Kurdish formations] the People’s Protection Units must leave the 30-kilometer zone. The countdown will begin tomorrow at 12:00 [local time, same as Moscow time — TASS]. After the 150 hours run out, Turkey and Russia will begin joint patrolling of the area to the east and to the west of the Peace Spring operation zone,” Erdogan said.

According to him, joint patrolling will be carried out on the Syrian territories 10 kilometers away from the Turkish border.

Meduza reported the following specific terms of the agreement, noting that “Erdogan’s claims were reduced to a stretch of land just 60 miles wide that contains only the two Kurdish cities Turkish armed forces managed to seize since the start of the operation against the Kurds.” :

Other bilateral issues were discussed at the 6-hour-long conference between the two leaders, including defense cooperation involving the S-400 and continued trade in bilateral currencies. Again, according to Tass:

The Turkish president also announced that Ankara and Moscow “agreed to expand trading in national currencies.”

Putin later conferred with Syrian president Assad by telephone to inform him of the outcome of the meeting with Erdogan. Kremlin spokesman Dmitry Peskov briefed the media on the call and stated that beginning today, Syrian border guards will conduct joint patrols with the Russians near the Turkish-Syrian border for about a week before the Turks begin their joint patrols with the Russians in the smaller stretch over which they recently gained control :

According to Peskov, the Russian leader stressed that the main goal is to recover Syrian territorial integrity and to continue political regulation efforts, including the work related to the Syrian Constitutional Committee.

Assad supports the decisions taken on the outcomes of the talks, the Kremlin spokesman added. “President al-Assad thanked Vladimir Putin, expressed his full support for the results of the work and stated that he is ready to send Syrian border guards to the [Syrian-Turkish] border along with the Russian military police,” he said…

….Starting midday October 23, the Russian military police and Syrian border guards will arrive at the Syrian-Turkish border to monitor the withdrawal of Kurdish military formations to the depth of 30 km from the border. In 150 hours, Russia and Turkey will begin the joint patrolling of the area.

Just prior to the Putin-Erdogan meeting, it was reported that U.S. diplomats told the political leader of SDF – who was in Washington D.C. for urgent talks that became contentious- that they would “not allow” the Kurds to make a deal with Assad or the Russians. But since the Kurds are no longer getting protection from the U.S., it appears they will likely not be abiding by any dictums issued by Washington.

About the author(s)
Natylie Baldwin is the author of The View from Moscow: Understanding Russia and U.S.-Russia Relations, forthcoming in Winter of 2019.  She is also co-author of Ukraine: Zbig’s Grand Chessboard & How the West Was Checkmated, available from Tayen Lane Publishing. The book can be purchased in paperback here or electronically here.  Publisher’s page here.

STEVE BANNON – A PROFILE OF A U.S. APPARATCHIK. FROM CHINA TO THE POPE