Home ABOMINATIONS Pseudo progressives: The glaring case of John Oliver. This is no laughing matter.

Pseudo progressives: The glaring case of John Oliver. This is no laughing matter. 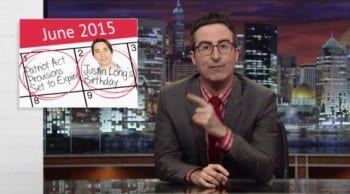 The glaring case of John Oliver, hiding behind comedy to inject CIA/War Democrat party propaganda and all the evil that that entails.

Trump derangement syndrome—true or feigned— is no excuse. And John Oliver, as bright a fellow as they come, should know better, but then, listening  to their pockebooks, none of the complacent corporate comics do. Oliver's good work on certain issues does not cancel the overall negative impact of his silence and dissembling on the larger structural issues that accurse capitalist societies, especially the United States and Britain. In this context, Oliver's attacks on the Green Party and Jill Stein, and the very idea of third parties in American politics, have been obnoxious and inexcusable.

Below we present a compendium of materials that leave little doubt about where Oliver's true allegiances lie.  This is not the only time we have discussed the role of corporate comedians in shaping public opinion in favor of the status quo, something we regard as a betrayal of their implicit role, that of rebels speaking contrarian even seditious opinions. Oliver is not alone, of course , in his dereliction of duty.  Fellow establishment comics Stephen Colbert, Norm McDonald, and Bill Maher, the onetime "politicaly incorrect" celebrity comedian, are all cut from the same cloth, and routinely even exceed Oliver's genuflexions at the altar of corporatism.

These days, unless we look at Jimmy Dore or Lee Camp, there are simply no widely known comics in the tradition of George Carlin. We miss you, George.

More on this topic: The Joke’s on You: Are Jon Stewart and Stephen Colbert Lulling Americans Into Submission?

Oliver joins the CIA/Democrat choir berating Trump (however flawed, phony or self-serving that may be) for his Syria troop pullout initiative.

John Oliver attacked Jill Stein with reckless unfunny smears that included criticizing her for suggesting quantitative easing could be used to alleviate student debt. Legendary journalist Robert Scheer, who wrote The Great American Stick Up, a book about the banking system, weighs in on the reality of how quantitative easing really works.

The Jimmy Dore Show
Corporate comedian John Oliver's supposed "takedown" of Jill Stein was complete nonsense, particularly when he spread the lies about her position on vaccines

Matt Orfalea
John Oliver is a great comedian. But he might be an even better corporate tool.

About the Author
Patrice Greanville, who founded the first radical media review—Cyrano's Journal— almost 50 years ago, has long berated the left for not paying enough attention to the construction of a robust alternative media system.

Thanks for this post. My blood pressure can’t take watching Oliver (or the many others) spout their CIA talking points for long, but I appreciate you shining a light on this issue, as it is a vitally important one. The supposedly “liberal” & “hip” late night comedians shilling for capitalism and war demonstrates just how seamless our Western propaganda system actually is. From Hollywood movies & TV shows, to the “hip” comedians, to daytime talk-shows, and virtually all MSM radio, newspapers and magazines and web broadcasts – the same pro-capitalist/pro-war message is ubiquitous and mind numbingly present for “consumption” 24/7 in the Western world.

The last vid was hard to watch because of the beat in the background. I know that the young generation has to always have loud beats playing, everywhere they do and no matter what they’re doing, but it does work for me. I could concentrate on the boy’s message and gave up. I watched each of Dore’s vids, but not to their conclusion. I got his point. I just don’t enjoy listening to him talk like a toilet. And I don’t have to.

But this is an important article. I’ve already linked to it in one of my blog posts (“Progressives – part 4”) Thanks Patrice.

A mistake I seem to make all of the time, as I did in the above comment, is to rush through typing and forget to finish my “can’t” and “doesn’t” and such so that the reader sees ‘can’ and ‘does’ instead. You can sort of tell from the context what I intended. Sorry though for the muddle. And that should have been ‘everywhere that kids go’, not ‘everywhere that kids do’.

Somewhere in Christ’s College, Cambridge, hangs a portrait of John Oliver that is getting more hideous by the week. His full-length hatchet job on Jill Stein a month or so before the 2016 general was stomach-churning,* and his subsequent shots at Maduro and Putin haven’t been much better. Has he done a hatchet job on Bernie or Tulsi yet? He really should. It’s right up his alley. Intellect and wit in service of plutocracy and empire. What a douche.

*I hate to break it to John, but if Americans were genuinely required to vote for one of only two candidates, my vote would not have gone to the Warmongering Queen of the Fortune 500 at that point in time. (Sorry, John. I know Hillary was Time Warner’s pick, but I just don’t think I could have done it, whether sober, drugged, hypnotized, at gunpoint, or — and I’m talking about you here — ridiculed.) Even now, it would be like being forced to choose between Ebola and Marburg. Obviously, Time Warner (now owned by AT&T) still likes Marburg a lot better. I expect that will change if Bernie gets the Democratic nomination — and won’t that be a fun tightrope-walk for you, you “progressive” political comedian, you!