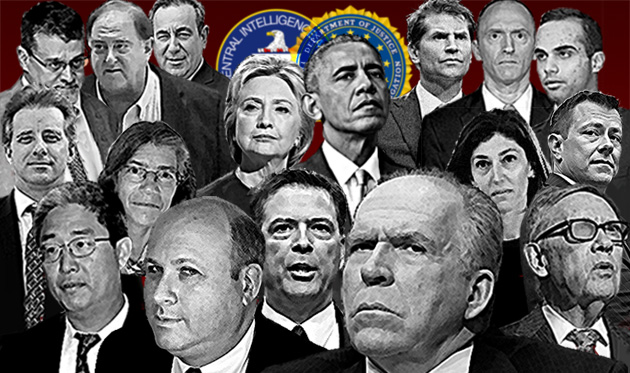 [dropcap]I[/dropcap]t gets funny, this shallow analysis of the deep state that is currently big news. There’s something ghoulish about it, perfectly timed for Halloween and masked jokers. What was once ridiculed by the CIA and its attendant lackeys in the media as the paranoia of “conspiracy theorists” is now openly admitted in reverent tones of patriotic fervor. But with a twisted twist.

The corporate mass-media has recently discovered a “deep state” that they claim to be not some evil group of assassins who work for the super-rich owners of the country and murder their own president (JFK) and other unpatriotic dissidents (Malcom X, MLK, RK, among others) and undermine democracy home and abroad, but are now said to be just fine upstanding American citizens who work within the government bureaucracies and are patriotic believers in democracy intent on doing the right thing.

This redefinition has been in the works for a few years, and it shouldn’t be a surprise that this tricky treat was being prepared for our consumption a few years ago by The Council on Foreign Relations. In its September/October 2017 edition of its journal Foreign Affairs, Jon D. Michaels, in “Trump and the Deep State: The Government Strikes Back,” writes:

Furious at what they consider treachery by internal saboteurs, the president and his surrogates have responded by borrowing a bit of political science jargon, claiming to be victims of the “deep state,” a conspiracy of powerful, unelected bureaucrats secretly pursuing their own agenda.  The concept of a deep state is valuable in its original context, the study of developing countries such as Egypt, Pakistan, and Turkey, where shadowy elites in the military and government ministries have been known to countermand or simply defy democratic directives. Yet it has little relevance to the United States, where governmental power structures are almost entirely transparent, egalitarian, and rule-bound.

The White House is correct to perceive widespread resistance inside the government to many of its endeavors. But the same way the administration’s media problems come not from “fake news” but simply from news, so its bureaucratic problems come not from an insidious, undemocratic “deep state” but simply from the state—the large, complex hive of people and procedures that constitute the U.S. federal government.

Notice how in these comical passages about U.S. government transparency and egalitarianism, Michaels slyly and falsely attributes to Trump the very definition – “unelected bureaucrats” – that in the next paragraph he claims to be the real deep state, which is just the state power structures. Pseudo-innocence conquers all here as there is no mention of the Democratic party, Russiagate, etc., and all the machinations led by the intelligence services and Democratic forces to oust Trump from the day he was elected. State power structures just move so quickly, as anyone knows who has studied the speed with which bureaucracies operate. Ask Max Weber.

Drip by drip over the past few years, this “state bureaucracy” meme has been introduced by the mainstream media propagandists as they have gradually revealed that the government deep-staters are just doing their patriotic duty in trying openly to oust an elected president.

Many writers have commented on the recent New York Times article, Trump’s War on the ‘Deep State’ Turns Against Him” asserting that the Times has finally admitted to the existence of the deep state, which is true as far as it goes, which is not too far. But in this game of deceptive revelations – going shallower to go deeper – what is missing is a focus on the linguistic mind control involved in the changed definition.

In a recent article by Robert W. Merry, whose intentions I am not questioning – “New York Times Confirms: It’s Trump Versus the Deep State” – originally published at The American Conservative and widely reprinted , the lead-in to the article proper reads: “Even the Gray Lady admits the president is up against a powerful bureaucracy that wants him sunk.” So the “powerful bureaucracy” redefinition, this immovable force of government bureaucrats, is slipped into public consciousness as what the deep state supposedly is. Gone are CIA conspirators and evil doers. In their place we find career civil servants doing their patriotic duty.

Then there is The New York Times’ columnist James Stewart who, appearing on the Today Show recently, where he was promoting his new book, told Savannah Guthrie that:

Well, you meet these characters in my book, and the fact is, in a sense, he’s [Trump] right. There is a deep state…there is a bureaucracy in our country who has pledged to respect the Constitution, respect the rule of law. They do not work for the President. They work for the American people. And, as Comey told me in my book, ‘thank goodness for that,’ because they are protecting the Constitution and the people when individuals – we don’t have a monarch, we don’t have a dictator – they restrain them from crossing the boundaries of law. What Trump calls the deep state in the United States is protecting the American people and protecting the Constitution. It’s a positive thing in this sense.

So again we are told that the deep-state bureaucracy is defending the Constitution and protecting the American people, as James Comey told Stewart, “in my book, ‘thank goodness for that,’” as he put it so eloquently. These guys talk in books, of course, not person to person, but that is the level not just of English grammar and general stupidity, but of the brazen bullshit these guys are capable of.

This new and shallow deep state definition has buried the old meaning of the deep state as evil conspirators carrying out coup d’états, assassinations, and massive media propaganda campaigns at home and abroad, and who, by implication and direct declaration, never existed in the good old U.S.A. but only in countries such as Egypt, Turkey, and Pakistan where shadowy elites killed and deposed leaders and opponents in an endless series of coup d’états. No mention in Foreign Affairs, of course, of the American support for the ruthless leaders of these countries who have always been our dear allies when they obey our every order and serve as our servile proxies in murder and mayhem.

Even Edward Snowden, the courageous whistleblower in exile in Russia, in a recent interview with Joe Rogan, repeats this nonsense when he says the deep state is just “career government officials” who want to keep their jobs and who outlast presidents. From his own experience, he should know better. Much better. Interestingly, he suggests that he does when he tells Rogan that “every president since Kennedy” has been successfully “feared up” by the intelligence agencies so they will do their bidding. He doesn’t need to add that JFK, for fearlessly refusing the bait, was shot in the head in broad daylight to send a message to those who would follow.

Linguistic mind control is insidious like the slow drip of a water faucet. After a while you don’t hear it and just go about your business, even as your mind, like a rotting rubber washer, keeps disintegrating under propaganda’s endless reiterations.

To think that the deep state is government employees just doing their patriotic duty is plain idiocy and plainer propaganda.

It is a trick, not the treat it is made to seem.