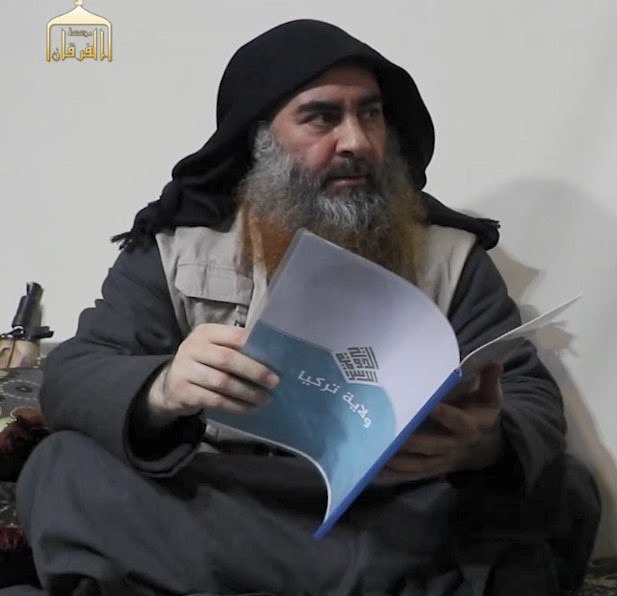 Baghdadi with worrisome folder.  Turkey "province" on his mind.

[dropcap]E[/dropcap]ight and a half years ago when the war on Syria began, Turkey played the most important role. Weapons were smuggled from Libya through Turkey to be delivered to 'Syrian rebels'. Over the years tens of thousands of foreign Jihadis traveled through Turkey to join the various groups fighting against the Syrian government. After the Islamic State came into existence even more followed.

When the U.S. changed course and started to fight ISIS it urged Turkey to clamp down on the stream of fresh fighters. Turkey did so to some extent after several ISIS bombings killed dozens within Turkey. But recent events show that Turkey still does not see ISIS as an adversary. Nor do ISIS leaders fear Turkish authorities.

On October 26 2019 President Donald Trump announced that U.S. special forces had killed ISIS leader Abu Bakr al-Baghdadi. Baghdadi and two of his wives were found in a house in Barisha village in Idleb governorate in Syria. Barisha is just 5 kilometer (3 miles) from the Turkish border and the Turkish city Reyhanli. The Idleb region (darker green) is under Jihadi control but Turkey has several outposts within the area. 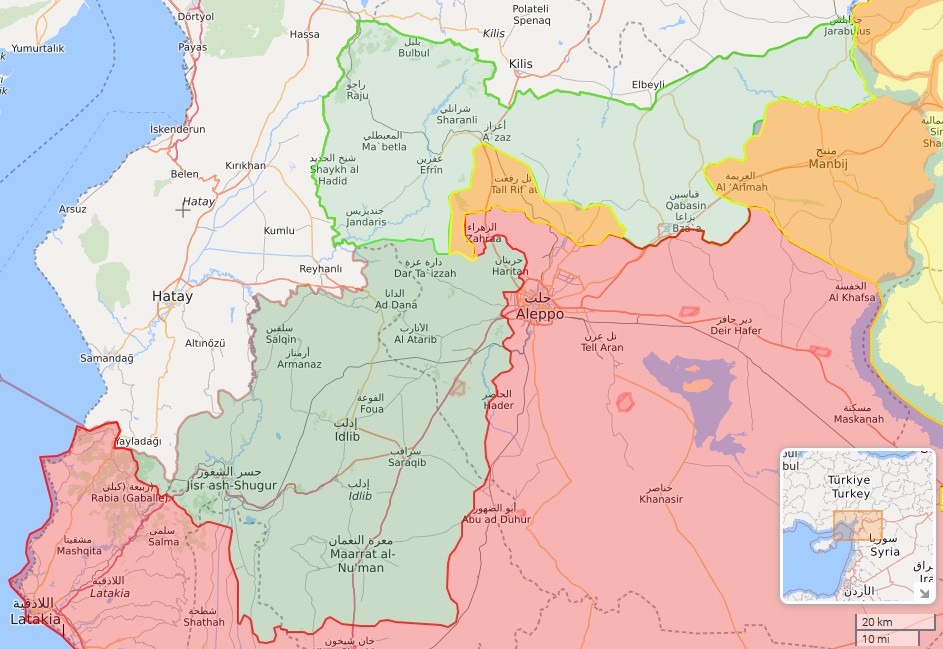 The Guardian reported that Baghdadi's entourage had reached Idleb from east Syria by traveling through Turkey:

Iraqi officials say that in mid-September they identified a Syrian man who had been used to smuggle the wives of two of Baghdadi’s brothers, Ahmad and Jumah, to Idlib province via Turkey. The same smuggler had earlier helped move Baghdadi’s children from Iraq. Iraqi intelligence officers say they were able to co-opt the man and a woman believed to be his wife, as well as one of Baghdadi’s nephews, into providing information about the route he used and the destination of the people travelling with him. It was a break like no other, and was soon passed to the CIA.

A day after Baghdadi's death U.S. forces killed ISIS spokesperson Abu al-Hassan al-Muhajir in the village of Ayn al-Bayda, near Jarabulus. The Jarabulus area of Syria is under Turkish control (light green).

On October 28 2019 U.S. helicopters again landed in Jarablus and either captured someone or ex-filtrated an asset:

Turkey has UAVs, signal intelligence and military outposts throughout those regions. It has lots of intelligence assets on the ground. None of them knew about those ISIS leaders living in those areas?

All three U.S. operations were launched from Iraq or from Kurdish controlled areas in northeast Syria even though the flight time from the U.S. base in Incirlik, Turkey, would have been much shorter. It seems that the U.S. did not trust its NATO ally to prematurely learn of such missions.

After being shamed over its willful negligence towards ISIS assets in areas it controls Turkey took some diversionary steps.

On November 1 it captured the Belgian Islamic State member Fatima Benmezian in Kilis, Turkey. Benmezian had escaped from a refugee camp in northeastern Syria a few weeks ago when it was bombed by Turkey.

On November 4 Turkish forces captured the sister of Baghdadi, Rasmiya Awad, alongside her husband and daughter-in-law. They were living in a container trailer near the town of Azaz in Aleppo province. Azaz is only a few kilometers south of Kilis and under Turkish control.

Today Turkey claimed that it had captured another wife of Baghdadi but it did not say where she was found.

None of those persons Turkey nabbed have any operational value. They are expendables.

But it is really remarkable that all these ISIS persons happened to live in Turkish controlled areas near Turkish border crossings. Are we to believe that they had chosen an area where no other ISIS members are around? It is quite more likely that there are many more ISIS members who are now living in those border areas of Syria which are more or less under Turkish control.

Some of them even travel extensively through Turkey:

A brother of ISIS leader Abu Bakr Al Baghdadi travelled several times to Istanbul, Europe’s largest city, from northern Syria in the months before the terror chief's death, acting as one of his most trusted messengers to deliver and retrieve information about the group’s operations in Syria, Iraq and Turkey, according to two Iraqi intelligence officials.
...
“We were watching somebody who was acting as a messenger to Al Baghdadi and he was travelling frequently to Turkey and back,” said a senior Iraqi intelligence official. “He was Al Baghdadi’s brother.”
...
An Iraqi intelligence agent who worked directly on the operation to track Juma said the terrorist leader's brother continued to reappear in the following months, until his last recorded visit to Istanbul in April. He is then believed to have returned to north-western Syria, months before the location of his brother’s safe house was revealed. It is unlikely he was smuggled across the border, the agent said, but rather moved across it freely.
...
“It is impossible for the Turkish intelligence that Turkey does not know of his presence five to seven kilometres away from the Turkish border,” a former high-ranking Turkish military officer said.

Turkey is evidently becoming another Pakistan. That country went from bad to worse when it supported an Islamist insurgency against a communist regime in its neighbor country. The war radicalized millions within its own border. Many of the fighters' families settled in Pakistan which further established extremist views. It led to at times civil war like insurgencies in several of Pakistan's provinces.

Turkey's President Erdogan seems to believe that his coddling of ISIS members and other radicals will not harm his country. Back in April ISIS published a video with Baghdadi:

At one point one of the three other people gives him a folder with some plans. The folder is marked Wilayat Turkey. (Wilayat means province of the Islamic State).

Lindsey Snell @LindseySnell - 19:48 UTC · Nov 6, 2019
There are 5000 ISIS members from 28 countries at this SDF-run prison in Hasakah. We asked a Turkish ISIS member if he wanted to return to Turkey and he said “evet!” He says he knows of many ISIS members who returned to Turkey, were detained for a week or so, and then freed.

Erdogan thinks that he can keep the ISIS cells in his country under control. That is unlikely. I am afraid that during next few years Turkey will have a rather rude awakening.