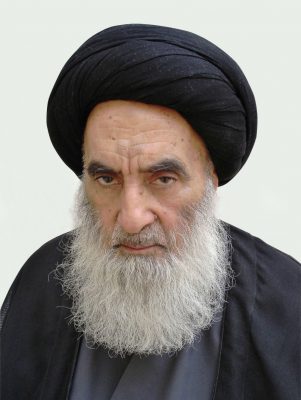 Sistani: a man of probity, with enormous political and cultural influence in the region.

[dropcap]P[/dropcap]rotests in Lebanon and Iraq were caused by internal problems but are manipulated by external forces. Today an Iraqi leader exposed those forces which might well bring that problem to an end. Lebanon will still have to suffer through more strife.

Anti-government protests in Iraq entered their third week with fresh bloodshed on Friday, as leaders appeared to have closed rank around the country's embattled premier.

More than a dozen demonstrators died in Baghdad and the southern port city of Basra within 24 hours, medical sources told AFP.

The reporter listened to some protesters and it is interesting what voices s/he chose to repeated:

"Even if it comes down to the last man, we have to enter the Green Zone and bring it down," another protester shouted.

"We'll announce our people's revolution from there against everyone who stole from us -- Prime Minister Adel Abdel Mahdi, Qais al-Khazaali, Hadi al-Ameri!" he said.

Khazaali and Ameri are leading commanders in the Hashed al-Shaabi paramilitary network, which has publicly backed the government after protests erupted.

It was founded in 2014 to fight the Islamic State group, drawing from a host of Shiite armed factions, many of which have close ties to Iran.

A month ago we wrote that the legitimate protests in Iraq and Lebanon are used by the U.S. for coup attempts financed by Saudi money. The actual target of the coup attempts are those groups who have the support of Iran - Hizbullah in Lebanon and the Hashd al Shaabi in Iraq. That is why the AFP piece quotes those who attack the leaders of the Hashed which was founded, trained and equipped by Iran. It is now standard in 'western' reporting to falsely depict the protests as being against those entities.

The best strategy for the legitimate protesters is to press the current governments for reform. The governments in Iraq and in Lebanon have both already agreed to make certain changes. The protesters should accept those and pull back. If the politicians do not stick to those commitments the protesters can always go back into the streets and demand more.

Unfortunately there are external actors with lots of money who want to prevent that. They want to throw both countries into utter chaos or even civil wars because they hope that it will weaken those factions that have good relations with Iran.

But external actors have made such bids before only to fail to achieve the wanted results.

The AFP last line is curious:

On Friday, the country's top Shiite cleric Grand Ayatollah Ali Sistani said there should be "no more procrastination" on finding a "roadmap" to end the crisis.

Sistani said much more than that (in Arabic).

He urged the politicians in power to lay out a specific roadmap of reforms to end corruption, to end sectarian/political quotas and for social justice. He called that a 'unique opportunity'. He urged the legitimate protesters and the government to stay peaceful.

Fourth: There are parties and internal and external parties that have played a prominent role in the past decades in Iraq, which has been severely harmed and subjected to the oppression and abuse of Iraqis, and it may seek today to exploit the ongoing protest movement to achieve some of its objectives. Participants in the protests and others should be Great caution against the exploitation of these parties and any loophole through which they can penetrate their gathering and change the course of the reform movement.

The external parties that Sistani calls out are of course the U.S. which invaded Iraq and the Saudis who financed the Islamic State. That Sistani is directly pointing to them is extraordinary.

The last part of Sistani's message is equally important:

Fifth: Our pride in the armed forces and those who joined them in the fight against ISIS terrorism and defending Iraq as a people, land and sanctities have a great credit to everyone, especially those who are stationed to this day on the borders and the following sensitive sites, we should not forget their virtues and should not forget They hear any word that detracts from their grave sacrifices, but if it is possible today to hold peaceful demonstrations and sit-ins away from the harm of terrorists, it is thanks to these heroic men, they have full respect and appreciation.

Sistani, who is not pro-Iran, is fully supporting the Hashd al-Shaabi. The external actors who want to use the protest to put Hashd down will fail.

After the U.S. invaded Iraq its viceroy Paul Bremer [a Kissinger protegé] planned to install a proxy government without any elections. It was Ayatollah Sistani who prevented that when he publicly decreed that the U.S. had to let the Iraqis decide for themselves. The Marja had spoken, the U.S. had to back down and elections were held. His statement today is of similar importance and weight.

Most important:
Stresses respect for armed forces & Hashd al-Shaabi: "All those who fought against terrorism and still are on the frontline"

Unusual:
Grand Ayatollah Sistani (via Sheikh Karbalaei) warned explicitly #SaudiArabia and the #US, responsible for what had happened to Iraq (ISIS and the destruction that came with it), from interfering with the protestors.

I knew S Sistani for many years. I can tell: this is unheard off and never ever Sayyed Sistani was so clear and direct, without saying the names of the countries involved, in accusing foreign intervention.

His defence of Hashd al-Shaabi is putting an end to all naive analysts.

Sistani's statement likely also puts an end to the violent protesters. Those who continue to fight or storm government buildings will now be seen as U.S. and Saudi agents. It is now also likely that the coup attempt will fail and that the Iraqi government will survive. But it will have to implement the reforms the genuine protesters are asking for.

That should be doable as Iraq has significant income and can finance reforms.

The situation in Lebanon is way more difficult. The sectarian warlords and politicians who traditionally reign over the country and share the spoils are unwilling to leave their positions. There is always the chance of another civil war and the country is nearly bankrupt. It will require more delicate negotiations, or even violence, to effect some change.