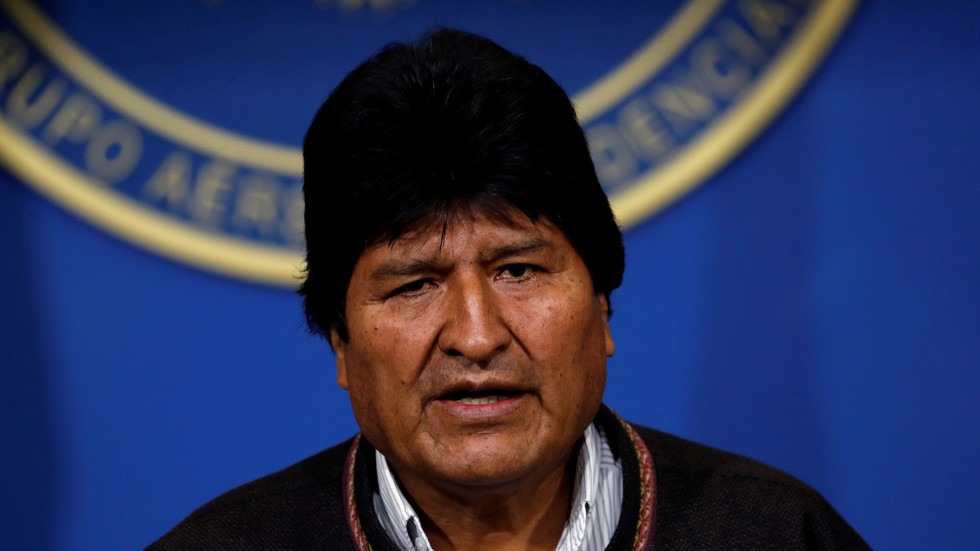 FORCED TO STEP DOWN—Bolivia's President Evo Morales addresses the media at the presidential hangar in the Bolivian Air Force terminal in El Alto, Bolivia, November 10, 2019. © REUTERS/Carlos Garcia Rawlins
Follow RT
Bolivia’s President Evo Morales has resigned, shortly after the country’s military urged him to do so. Two officials next in line to take over the government also left as the country is in turmoil after weeks of protests.

"I resign from my position as president so that (Carlos) Mesa and (Luis Fernando) Camacho do not continue to persecute socialist leaders," Morales  said during a televised address naming the leaders of the opposition.

Morales said that he decided to leave the post in hopes that his departure would stop the spate of violent attacks against officials and indigenous people, “so that they [protesters] do not continue burning the houses [of public officials]" and  "kidnapping and mistreating" families of indigenous leaders.

"It is my obligation , as the first indigenous president and president of all Bolivians, to seek this pacification,” he said, adding that he hopes opposition would “understand the message.”

Shortly after the announcement his Vice-President Alvaro Marcelo García Linera also submitted his resignation. The next person in line to take over the government, the president of the Senate Adriana Salvatierra, resigned soon after.

Let's be clear: Evo Morales resigned as president of Bolivia to avoid further bloodshed, violence and destruction by a right-wing coup backed by powerful interests. Evo stepped down and put his country and people's well-being and safety before his own desire to remain in power.

Earlier on Sunday Morales announced snap elections, giving in to the mounting pressure over the disputed results of the October 20 polls. The decision followed the release of a preliminary report from the Organization of American States (OAS) mission on the elections, that was unable to validate them, saying it is “statistically unlikely” that Morales secured a 10-percent lead, required to avoid a runoff vote. Moreover, the auditors claimed they had found signs of “clear manipulation” and irregularities during the polls.

Bolivian opposition urged Morales to resign altogether despite his promise of the new elections. While he briefly resisted such calls, branding them “unconstitutional” and an “attempted coup,” the President eventually gave in after the military joined that chorus.

Shortly before Morales announced his resignation, Bolivian TV channels aired footage of what they say  was a presidential plane departing from  El Alto International airport. It was reported that the plane took Morales to his political stronghold of Chimoré in the Department of Cochabamba, 300 kilometers (186 miles) east of La Paz, a city where he launched his reelection bid back in May.

Videos from La Paz, the site of many recent anti-Morales protests, show crowds cheering after the resignation announcement.

Ruling Bolivia since 2006, Morales has gained a reputation as a staunch defender of socialism and an ardent critic of US foreign policy. The country's highest court ruled in 2018 that he could run for the fourth time.

The corporate media has been spreading a lot of lies and distortions to justify the right-wing US-backed coup in Bolivia.

The top court ruled Evo was allowed to run again for president.

He won re-election fairly. The opposition is overthrowing democracy.https://t.co/62IHF59IQT

After the contested October elections there were rival rallies of Morales’ opponents and supporters throughout the country. While some anti-government protests have remained peaceful, others have led to rioting in major cities, clashes with police, and attacks on pro-government politicians. On Saturday, protesters burned the house of Oruro city governor  Víctor Hugo Vásquez, who stood by the president as tensions flared up.

Morales stressed that his resignation does not mean that the socialist case is defeated.

"It is no betrayal. The struggle continues. We are a people,” he said.

OPINION: Why the Billionaires Love Candidates Such as Pete Buttigieg

Evo Morales Resigns in the Face of Fascist Attacks