Evo Morales Resigns in the Face of Fascist Attacks 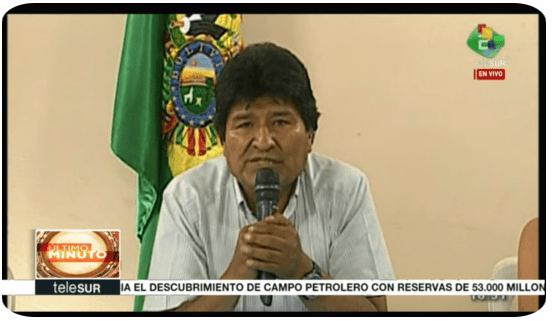 The president of Bolivia, Evo Morales, has announced his resignation from office after opposition groups, who do not want to recognize the election results of last October 20, launched a wave of violence.

The escalation of violence by these groups attacked militants and leaders of the Movement towards Socialism (MAS). They are intimidating journalists, burning residences of MAS members, including Evo’s sister, and attacking anyone who looks indigenous. Some political allies and the National Police have gone over to the side of the opposition. The country is in a complete crisis.

In a communiqué, the Armed Forces (FF.AA.) indicated that in order to recover the stability of the nation, a change in the presidency is necessary:

“We suggest to the president that he resign his mandate allowing the pacification and maintenance of the stability of Bolivia”, said the commander in chief of the Armed Forces, William Kaiman.

Morales suffered the collapse of his cabinet after massive resignations such as in the cases of the vice minister of Tourism, Marcelo Arze; the president of the Supreme Electoral Tribunal, María Eugenia Choque; the minister of Planning, Mariana Prado; as well as the senator-elect from Potosí, René Joaquino; Governor Juan Carlos Cejas and Mayor Williams Cervantes, from the same department.

Although the now former Bolivian president called on international organizations such as the United Nations (UN) and the Organization of American States (OAS) to audit the electoral results and convene all social sectors to a Roundtable of Dialogue, that was not enough for the opposition and far-right groups remained deployed in the streets attacking the population.

Morales’s forced resignation leaves Bolivia with high human development indexes, guaranteeing the fundamental rights of the population and with an economic growth of 4.5 percent, according to the Economic Commission for Latin America and the Caribbean.