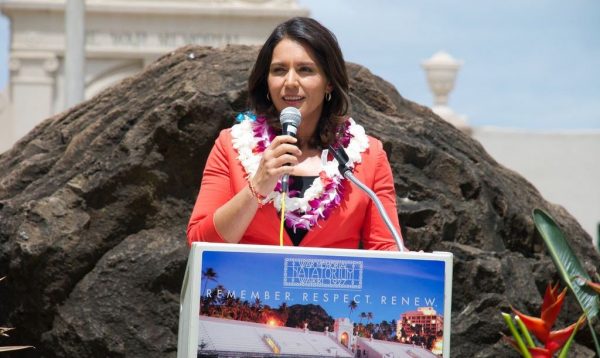 Tulsi Gabbard, a U.S. Presidential candidate in the Democratic Party primaries, had gotten transformed by her experience as a soldier in Iraq. The American public seem to repudiate her for what that experience turned her into, which is a fighter now against lying news-media and politicians — against the people who inflicted this barbarism upon not only the residents of Iraq but especially upon her fellow U.S. soldiers, many of whom got destroyed and some even died from the resulting carnage there. It seems to have moved her deeply, and Americans don’t like what it moved her toward, which is a passionate opposition to what she calls “regime-change wars.” Iraq in 2003 was a landmark example of that because it so clearly was based only upon lies (such as this). She learned some lessons from the experience, but very few Americans want to learn them — not even after these same lessons were taught again in Libya, Syria, and elsewhere, after 2003.

According to the latest 8 polls of the support, by registered Democratic voters, for candidates in that Party’s Presidential nominating contest, Gabbard is supported by 1.5% of the polled registered Democratic voters nationwide.
Generally speaking, the U.S.-and-allied mainstream media do not share Rep. Gabbard’s attitude toward these wars. Yet there was at least one highly honored-in-The-West and thoroughly mainstream (London Times) journalist who has publicly acknowledged that the U.S. and its allies routinely invade and destroy nations on the basis, or ‘justification’, of lies that are stated by those Governments and then stenographically parroted by their propaganda-agents or press, the mainstream ‘news’-media: Hala Jaber. Here is what she told the interviewer — the retired progressive UK Member of Parliament, George Galloway — on Russia’s RT Television (headlined “George Galloway Interviews Hala Jaber & Nedka Babliku”, 31 May 2018), when asked why the mainstream media are losing audience-share to rising online “alternative-news” competitors: She said (2:45-): “Why are people now distrusting the mainstream narrative, if you want, … [it’s] because obviously, now, people are doubting and questioning what mainstream media are putting to us as fact, and people are questioning what governments are puting to people as facts.” Galloway asked if all of that had started with our invasion and occupation of Iraq, and she said, “Of course, we are in Iraq based on lies, … a pack of lies, and I believe, until today, we haven’t found the WMDs that we went — a country like Iraq that was totally disintegrated, broken down, the result after the war was not a better result, and people … then watched Libya happen, and disintegrate, Egypt, and now they are watching Syria, and people are beginning to say, wait a second, it’s been a buildup of lies, and why should we trust now the narrative that’s being presented about certain issues in Syria, … as being correct? … And people are beginning to doubt mainstream media and turning to alternative views.” For Galloway, that 13-minute interview was really about “the proprietors,” the owners, of the ‘news’-media, who want these lies to be spread, and who hire and fire people to spread them. (The interview in the second half, which was another 13 minutes, was with Babliku, and concerned Middle Eastern geopolitics  — Israel, Syria, Iran, and Russia — not news-media.)
So, how do the public feel about these lies after lies, for decades on end? Do they want less of it?
Apparently not in the United States. One of the biggest public criticisms of Donald Trump is that he wants to end America’s occupation of Syria. Furthermore in the ‘opposite’ political Party, the Democrats, the only Presidential candidate who argues to end America's succession of “regime-change wars” is Tulsi Gabbard, and only 1.5% of Democrats nationwide want her to become the nominee. So: whereas, perhaps, in some other countries, an imperialistic fascist aggressive regime might be starting to have problems of public acceptance, Americans in both of its Parties are overwhelmingly in favor of imperialistic fascism — that’s to say, international invasion and aggression against countries that never had invaded nor even threatened to invade the United States. Although Americans want their Government to stop arming and advising the Saudi regime to slaughter millions of people in Yemen with U.S. weapons, it’s not even really an issue in the Presidential primaries — the public just don’t care — they don’t feel any collective guilt about what their Government has done to Iraqis, and to Egyptians, and to Libyans, and to Syrians, and to Palestinians, etc.; they really just don’t care. To Americans, an imperialistic fascist American Government is not only entirely acceptable; they repudiate the only national politician who is speaking out against and trying to end this.
It seems that after the 2003 invasion-occupation of Iraq, the American public are all-out for bloodshed by the U.S. and its allies, against any country that their military-industrial-press-government complex (here: “MIPGC”) are out to destroy. They just want proxy-fighters — Saudis, Al Qaeda, Kurds, etc. — to do the fighting and dying, not U.S. troops. But now that, in Syria, Trump wants maybe to withdraw the last of those troops, all  of the press (a major part of the MIPGC) is yelling bloody murder, to ‘protect the Kurds’ (etc.). Isn’t the ‘humanitarianism’ of the American people amazing? They’d rather pay trillions in taxes for these aggressions, than get their own health care paid for from their taxes. Of course, I am writing this from the perspective of one of the tiny percentage of Americans who consider that majority absolutely disgusting. Frankly, if Gabbard were to run as an independent, or even as a Republican, I would be no less likely to vote for her. But in a room of 200 people, there’d probably be only 2 who would agree with me, in order to make that 1.5% of the total. That’s the type of country this is. Not to be bloodthirsty against foreigners, and not to support serial liars, is to be a marginal person, in this country.
It’s said that Trump is causing people outside the U.S. to despise the United States. But Obama was at least as bad, and he is internationally respected. Foreigners are no better than Americans. This really isn’t a national thing. It’s a reflection of the common global culture, which is sick everywhere.
THINK!

PETRAS: “Evo has to apply a hard hand in defense of the constitution and the will of the people”

As a Veteran, I Refuse to Celebrate War