November 15, 2019
Please make sure these dispatches reach as many readers as possible. Share with kin, friends and workmates and ask them to do likewise.

As the 2016 sabotage of the Sanders campaign contributed to the failure of the flawed HRC campaign against Trump whose election led to a campaign of illegitimate Russiagate allegations which were refuted by the Mueller investigation, those same partisan shills have now opened an ill-founded impeachment inquiry lacking a credible legal foundation and based on an allegedly anonymous whistleblower/CIA operative – all meant to distract Americans from the forthcoming Spygate indictments which promise to further decimate the once omnipotent Democrat party. 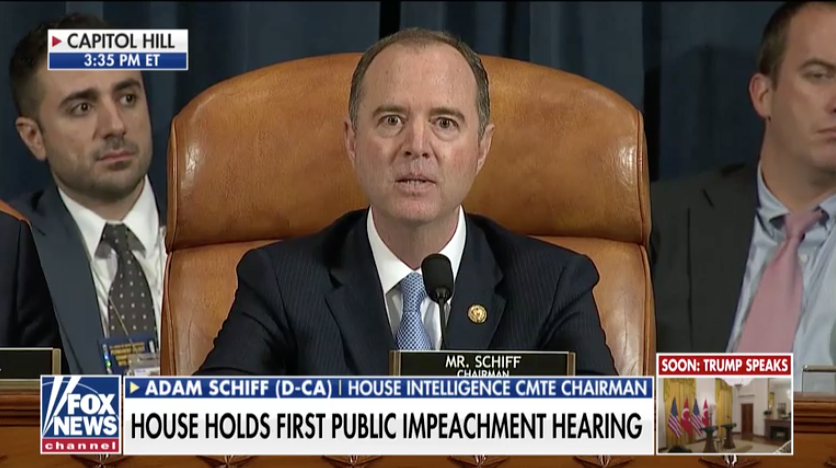 ABOVE: Liars’ Den— Warmongering Adam Schiff, one of Washington’s most repugnant, self-aggrandizing and hypocritical politicians, ends introductory presentation denying he knows the identity of the “whistleblower”.  Schiff is a poster boy for the nature of today’s congressional Democrat party.

The public circus of fomenting national disunity and turbulence has allowed the American public to recognize the Democratic party as it truly is, conniving corruption to the bone, promulgating an illicit behavior now threatening the very foundation of what remains of our democracy.

To make sense of the intervening events, one only need grasp that the CIA/FBI/DOJ pre-election efforts were meant to entrap low grade Trump campaign associates until they boomeranged once the election results were known. Still unknown is if those law enforcement/intel efforts were independent of the DNC or if a level of collusion occurred. Suddenly, there was an incoming duly-elected president whose staff had been infiltrated and surveilled as if it were a foreign power. Recognizing the need to cover a dozen or more collective butts served to deepen the panic to conceal the conspiracy as it set out to destroy the new President’s goal of peace with Russia.

If ever there was a time for all Americans of every political persuasion and ideology to rise above partisanship and stretch to a higher level of ethics and consciousness in support of the rule of law and a basic sense of fairness and justice, it is before us now.

The damage the Democrats have done to the idea of a real left is incalculable, and will take a long time to repair, if at all.

As a life long Jeffersonian Democrat who once self identified as a ‘passionate’ Democrat and partisan activist, it is fair to ask who are these imposters who shanghaied the Dems away from defending the First Amendment and their working class roots into the bosom of Wall Street, the military industrial complex and the intel community?

Now forever entwined with the CIA and Deep State, the Dems await their karmic payback with the soon-to-be released IG report and later, the Durham investigation, party loyalists would do well to take their wrath out on the DNC and its Congressional leadership who have repeatedly and continue to lie to the country. There is no doubt that the Democratic hierarchy were well aware that Mueller would bear no fruit to satisfy their lust for vengeance of the 2016 loss.

Not surprising it has been Tulsi Gabbard as the Only Democrat who understands the need to cease the fragmentation of American society. While not prone to hyperbolic overstatement, she suggests a more rational strategy, encouraging voters to do their job in November. The party’s hierarchy, and apparently much of its base, however, prefer to follow its Reptilian instincts strewing divisiveness and animosity far and wide. (The R Complex purports to be the brain’s ancestral throwback to the dinosaurs with an aggressive, war-like demeanor as home to Obsessive Compulsive Disorders.)

In a complete turnaround from what might have been expected, Republicans appear in the unusual role as the aggrieved party as an assertive House contingent reminds us what a healthy opposition looks like as Senate Republicans more closely resemble an overly pious parade of Goody Two Shoes.

As the impeachment inquiry unravels, career State Department witnesses who have no direct first hand knowledge of a crime had already testified behind closed doors are now center stage repeating the same inconsequential blather. As the inquiry drags on, it remains clear that there is no authentic WB but an individual who is a partisan snitch perhaps molded and created by the pompous Rep. Adam Schiff. who is known for Russiagate prevarications that never materialized. He now claims “I do not know the identity of the whistleblower” even after his staff redacted the WB’s name from public documents. Democrats on the Intel Committee who have refused to allow the alleged WB testify, are now struggling to provide credible evidence that Quid Pro Quo was committed and that such QPQ constitutes an ‘abuse of power” crime.

The IG Horowitz report regarding improper FISA Court applications may be public prior to Thanksgiving with a recommendation for criminal referrals including the possible declassification of documents that President Trump referred to AG Bill Barr some months ago. The question has been whether applications to the FISA Court to approve surveillance warrants on Trump campaign personnel were knowingly based on flawed Steele dossier, otherwise known as malarkey. It appears that those defective classified documents were then leaked to media outlets to provide credibility and justify the original application request to the FISA Court. The question remains whether there was a conspiracy to mislead and lie to the FISA Court; whether and how the FBI treated the Clinton campaign differently than they treated the Trump campaign.

As if there was not enough factual data to question the basis for an impeachment inquiry, attorney for the alleged WB, Mark Zaid, sent out a series of tweets clearly revealing the unfolding impeachment strategy beginning ten days after Trump’s inauguration.

On January 30, 2017 Zaid tweeted that the ‘coup has started. First of many steps, ‘ ‘impeachment will follow ultimately”.  By July, 2017 Zaid used social media to proclaim that “I predict @CNN will play a key role in @realDonaldTrump not finishing out his full term as president” and then later in July,

“We will get rid of him, and this country is strong enough to survive even him and his supporters”.

Of interest is a CIA-type memo from National Security Advisor Susan Rice regarding a January 5th White House meeting with FBI Director Jim Comey, Veep Joe Biden, President Barack Obama, and DOJ Deputy AG Sally Yates that followed a “briefing by IC leadership on Russian hacking during the 2016 presidential election” when President Obama had “a brief follow-on conversation. The president stressed that he is not asking about, initiating or instructing anything from a law enforcement perspective. He reiterated that our law enforcement team needs to proceed as it normally would by the book.”

To the detriment of American civil society, it may be that upon release of the impending investigations, up to, including and beyond the 2020 election, significant numbers of the public may refuse to acknowledge the validity of its sweeping conclusions or attribution of blame just as many still live in denial that Mueller found no Trump Russia collusion.

It is stunning how a population easily absorbs the persistent programming of untruths, lies and distortions that become embedded as their own personal world view without ever contemplating the illusory nature of that reality. Plato’s Allegory of the Cave suggests an alternative path to understanding a reality that opens humanity to a higher consciousness of peace, prosperity, justice and Universal harmony – if only we are wise enough to pursue it.

Renee Parsons has been a member of the ACLU’s Florida State Board of Directors and president of the ACLU Treasure Coast Chapter. She has been an elected public official in Colorado, an environmental lobbyist with Friends of the Earth and staff member of the US House of Representatives in Washington DC. She can be found on Twitter @reneedove31

Paul Craig Roberts: There Is No Such Thing as a Free Press

Fascist goons at work in Bolivia—we have seen this horror flick before, many times. (Video)