The Spanish elections and the rise of the fascistic Vox party


The rapid rise of the fascistic Vox party in Sunday’s Spanish elections is a warning of serious political dangers facing workers in Spain and around the world. As it faces mounting political protest and anger against social inequality, the ruling class is moving to set up fascistic police states tasked with violently repressing social opposition in the working class. 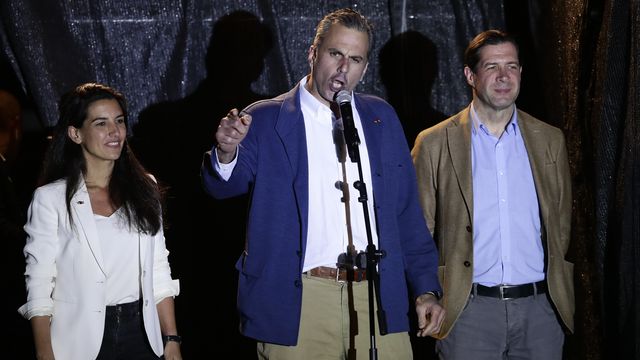 Vox officials have publicly hailed the record of the “national army” of Generalissimo Francisco Franco, the fascist dictator who launched a coup in 1936 against growing radicalization in the working class under the Spanish Second Republic. The resulting Civil War led to over a quarter million deaths and the imposition of a dictatorship that ruled Spain until 1978, three years after Franco’s death. Franco interned hundreds of thousands in concentration camps, banned strikes and political parties, censored the press and had thousands tortured by the secret police.

The Franco regime was so despised by workers in Spain and across Europe after it fell that, when Vox was founded in 2014, it attracted virtually no support. For several years, despite its extensive connections inside the army brass and the Popular Party (PP), Vox won 50,000 votes or less, well under one percent of the vote.

Vox’s vote surged, however, after the brutal police crackdown on the peaceful Catalan independence referendum of October 2017, and particularly amid Spanish nationalist attacks in the media against mass protests in Barcelona opposing last month’s jailing of Catalan nationalist political prisoners. On Sunday, Vox won 3.6 million votes, or 15 percent, doubling its parliamentary fraction from 24 to 52 seats—third behind only the Spanish Socialist Party (PSOE) and the PP.

Vox’s rise is part of a broad trend in European capitalist politics towards the growth of neo-fascist parties, nationalism and the official public legitimization of fascist dictators.

The Alternative for Germany (AfD) is currently the third-largest party in Germany, after years of propaganda by right-wing extremist professors and state officials to legitimize militarism and minimize the genocidal crimes of Nazism. Mass protests against the AfD have only intensified the ruling elite’s determination to rehabilitate Nazism. Last week, parliamentary president Wolfgang Schäuble denounced a “pacifist attitude” as the disastrous result of the Nazi defeat in World War II, which he called “the catastrophe of 1945.”

In France, as he launched a brutal crackdown on “yellow vest” protests against social inequality a year ago, President Emmanuel Macron hailed Nazi-collaborationist dictator Philippe Pétain as a “great soldier.” Amid growing anger at his social cuts, Macron continues to appeal to the far right, recently granting an interview attacking migrants and the Muslim veil to the far-right Current Values magazine. As a result, polls show he would now barely defeat neo-fascist candidate Marine Le Pen in a presidential election, by 55 percent to 45 percent.

The growth of fascism in official European politics does not signify a return to the mass popular support enjoyed by the Nazi Party, Mussolini’s National Fascist Party or the Francoite Falange. For now, it is a carefully staged political campaign, driven from the top, to promote violent, right-wing and nationalist opposition to social and political protest.

Vox’s rise is a classic example. While it has surged based on its anti-Catalan propaganda amid the wall-to-wall media denunciation of the independence referendum, no mass movement has emerged in Spain taking up Vox’s calls to deploy the army and execute political “criminals” in Catalonia. Polls confirm that large majorities of Spanish people support a negotiated settlement in Catalonia, despite the anti-Catalan hysteria in the media.

The promotion of Vox and of Franco comes overwhelmingly from the state machine. The PSOE allowed Vox to officially join its public prosecutor in persecuting Catalan officials who were given decade-long jail terms last month for organizing the peaceful 2017 referendum. And the Supreme Court in June issued an extraordinary ruling honoring “don Francisco Franco,” declaring that his October 1, 1936, self-proclamation as ruler of Spain during the Civil War made Franco the head of state—effectively ruling that Franco’s coup was legitimate.

Finally, the ruling elite focused the election campaign entirely on attacking mass protests in Catalonia, which were savagely repressed, with hundreds of arrests. Issues of concern to workers, like jobs, social programs and a halt to military-police violence, were off the table. The caretaker Socialist Party (PSOE) government, speaking for the entire capitalist class, had already written to the European Union (EU) pledging billions of euros in social cuts and military spending increases. All of this had the effect of boosting Vox.

The bourgeoisie’s failure to elicit broader support for its pro-fascist campaign up to now cannot, however, be a cause for complacency. The fascist threat is growing and its parties are winning increased support thanks to their constant promotion as the only alternative to the despised official parties.

Three decades ago, bourgeois propagandists proclaimed that the [Russian] bureaucracy’s dissolution of the Soviet Union in 1991 meant the “End of History” and the triumph of capitalist democracy. In fact, none of the contradictions of capitalism that drove the European bourgeoisie to stake its fate on fascist regimes in the 1930s had been resolved. Facing explosive anger at social inequality produced by decades of post-Soviet EU austerity and mass unemployment, the ruling class is again preparing dictatorship.

Sunday’s Spanish election revealed the breakdown of the parliamentary system established in 1978 in talks between the Francoite fascists, the PSOE and the Spanish [Communists]. The PSOE-PP duopoly at the heart of that regime has collapsed. Each of the four elections in Spain since 2015 has resulted in a hung parliament, and no party has been able to muster a parliamentary majority since then. The ruling class is responding, through Vox, by turning back to Francoism.

The critical task in this situation is to build an international revolutionary leadership <>. Deep, historically rooted opposition to fascism and nationalism exists in the European working class. But it cannot be mobilized without a political reckoning with faux left professors, army officers and union bureaucrats making up Podemos.

Founded in 2014 as a “radical democratic” party, Podemos has since 2015 called for coalition governments with the pro-austerity, pro-war PSOE. Constantly promoting Spanish nationalism and indicating his support for the devil’s bargain of the 1978 Transition, Podemos General Secretary Pablo Iglesias boasted in 2017 that he was a better nationalist than the right wing: “We will not allow them to say that they are more patriotic than we are.”

Podemos is hurtling further to the right, completing its integration into the police state machine. Last month Iglesias again pledged loyalty to the PSOE as it cracked down on the Catalan nationalists, touring Catalonia to applaud the police and declaring happily that “institutional relations between the police forces are working.”

It is the pseudo-left posturing and reactionary nationalist politics of Podemos that blocks working class opposition to the PSOE on its left, allowing Vox to posture as the only opponent of the alliance stretching from Podemos and the PSOE to the PP.

Explosive mass protests and struggles of the working class are already unfolding across Europe and beyond. The struggle to unify workers across all linguistic and regional divisions in Spain, together with their class brothers and sisters across the European continent, in a struggle to take state power and build a socialist society, will undermine the reactionary and unpopular nationalist politics of the bourgeoisie.

ABOUT THE AUTHOR
The author works for wsws.org, a socialist organization of Trotskyite persuasion.

Fascist goons at work in Bolivia—we have seen this horror flick before, many times. (Video)

Wall Street and the Frankenstein Economy

IT’S GETTING UGLIER BY THE DAY. A TIMELINE...

How NOT to Resist Trump: Kayleigh McEnany’s Anti-Science...

The China-Iran Deal to Undermine US Geopolitics and...