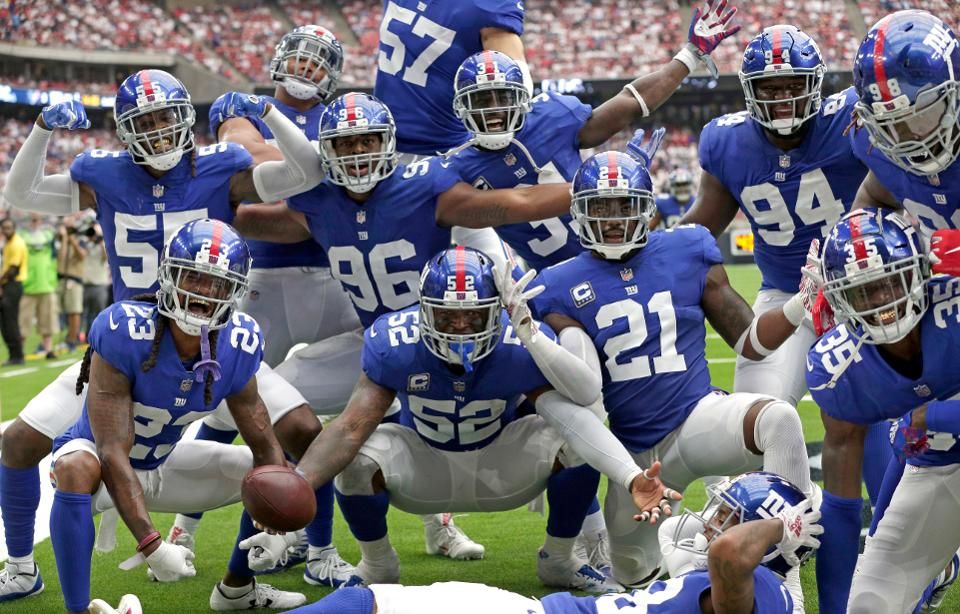 NY Giants: Expected to enter the 2020 Democrats' presidential crowd in the near future. And why not? They're entirely qualified.

Facing seasons promising little if any success, the New York Giants of the NFL and the Golden State Warriors of the NBA announced their teams entering the party primary as offering them much better chances of political rather than athletic good fortune.

“We haven’t got a chance at playing .500 let alone making the playoffs, but along with Bernie Sanders, Elizabeth Warren and Tulsi Gabbard, we think we can offer America diverse leadership and a chance to defeat Trump next year” said a spokesperson for the Giants. “Our team is composed of all skin tones, ethnicities and faiths, our administrators and staff number many women, we’re all college graduates who’ve paid our student loans, and though many of our male homosexuals are still in the closet we’re assured the male gay vote since we all regularly get naked and take showers together. We’ll be an electoral force to be reckoned with, for sure.”

A Golden State spokesperson claimed that even with most of their players unknown to the overwhelming majority of the population they still offered more name recognition than most of the other Democrats running for the nomination. “ We can’t even spell let alone pronounce one of these guys names and we’re all as educated as any other college graduate in congress, on Wall Street or in organized crime, which is what some of us call congress and Wall Street”

With just about everyone on the team at least a foot taller than most Americans, The Golden State Warriors boast splendid vision.

When asked what they would do about important issues like health care for all, war and peace, the Giants said they would disband the armed forces and use all that money to take better care of Americans while offering to block, tackle or otherwise beat the crap out of any country that gave us any trouble. “Right now most of the trouble we see comes from America so we might have to kick some local ass, but when people see how big, strong and tough we are there probably wont be any trouble from terrorists at the Pentagon or street criminals or whatever.”

The Warriors claimed that their great height advantage over most of the nation and the world would afford them great opportunities to act as visionaries and make some of the changes needed to bring about a more harmonious and peaceful world. “We can see beyond the horizon while most politicians can only see the next paycheck from corporate America, the Pentagon and the Israeli lobby. We’re also employed by rich people and are rather wealthy ourselves but since we have to run around in our underwear in front of thousands while making athletic moves beyond the capacity of most humans, we understand hard work. That’s more than can be said for our rich rulers.”

Sanders, Warren and Gabbard welcomed both teams entry into the campaign and said they would offer interesting participation in the debates but since being teams from the east and west coast it might be better for some teams from Middle America to enter the primary as well. “Cincinnati and Detroit aren’t doing so well so maybe they can be urged to toss their collective jock straps into the fray and give the party and the nation even greater balance.”

Democratic Party financial owners are said to be in a state of shock at candidates calling for relief from the anti-social economics they favor and support for socially conscious democracy and against inequality and war. Rumors on social media, tweets for twits and memes for morons claim they are thinking of starting a new party if these athletes follow through on their threat. The athlete’s representatives urge them to call it “ The Neo-Liberal Worship of the Rich Party”. This would be in contrast to the Neo-Conservative Worship of the Rich Party currently calling itself Republican.

Why Aren’t People in the US Rising Up Like Those Elsewhere in the World?