Home ACTIVISTS & HEROES Chile: More Than 26 Thousand Arrests in Less Than a Month

Chile: More Than 26 Thousand Arrests in Less Than a Month

A dispatch from Orinoco Tribune
VIA LA IGUANA TV 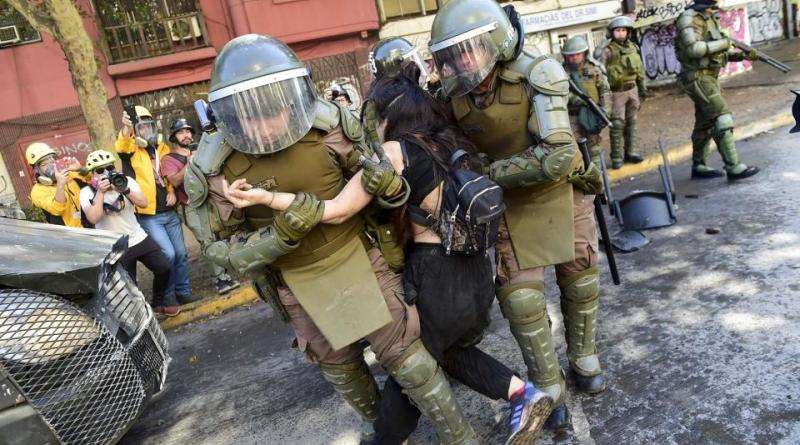 The repression in Chile has been (as usual) brutal, but this has not dampened the ardor exhibited by most of the protesters. As time goes by, their tactics of resistance and disobedience are being perfected. Image: Young woman taken away by Carabineros, the militarised police.

The judiciary in Chile reported Friday that a total of 26,126 Chileans have been arrested since October 18, when demonstrations and protests began in rejection of the Neoliberal policies imposed on the South American nation for 30 years.

Out of this number – cited local media – a total of 8,664 people are from the metropolitan region of Santiago, a Chilean province where strong and massive mobilizations were registered in rejection of the measures, intensified during the government of Sebastián Piñera.

RELATED CONTENT: Chile: A Day in Which the Fury against Piñera Became Evident

Similarly, the courts declared the illegal detention of 1,108 Chileans, while the public ministry has presented more than 1,700 people to be given preventive detention nationwide.

For almost a month, Chile has been experiencing a wave of protests against the government of Piñera. at least 23 dead and more than 2,300 injured have been registered in the country as a consequence, in large part, of the repression measures used by the police.

The Public Ministry also is investigating more than 800 complaints of human rights violations by the Chilean national police, including complaints of rape and sexual abuse.

Hooray for RT.com, among the few larger media reporting the truth about Chile via programs like this (by Rick Sanchez) and others whose views would never see the light of day on the whore corporate media, as their task is to suppress the truth and dissenting views, not the real purpose of democracy-enhancing journalism.  No wonder the "west"—led by the US-UK alliance, the major twin hypocrites—has declared war on RT.com, also part of their longstanding hatred of all things Russian.

Capitalism on trial in Chile – will it survive?

RT America
The common folk of Chile are engaged in weeks of violent protest against social inequality in their country. Twenty people have been killed and the government openly regards itself as at war with its own people. Rick Sanchez shows us the roots of Chile’s unrest. Then he takes us through some of the most extreme instances of the horrific and escalating violence in Hong Kong. Then “Boom Bust” host Christy Ai, investigative journalist Ben Swann and RT producer Dr. Enrique Rivera share their insights about Chile’s failing experiment in crony capitalism run amok. Broadcasting icon Larry King weighs in on President Donald Trump and the Democratic contenders for the presidency. RT's Yulia Shapovalova reports on Egypt's plan to buy Russian warplanes and Washington's reaction. RT America's Michele Greenstein explains the legal controversy surrounding worshipers barring women of childbearing age from a temple in India. Plus, comedian and host of "Redacted Tonight" Lee Camp discusses mainstream coverage of the coup in Bolivia.

Below, unfortunately only in Spanish audio, a field reportage of street skirmishes in Santiago's downtown, by an Argentinean TV crew. The images are eloquent.

So sorry to see that ‘The Greanville Post’ included this propaganda video by RT. I had strongly suspected that Russia Today was yet another “mild” extension of the quasi-mainstream media circuit; however, now, they’ve left me no doubt as they’ve rewritten history before our very eyes. One minute they’ll state straight-forwardly the brutal historical facts about a place like Chile and the US’s illegal and violent role there; but then the next minute they’ll soften the facts again, that is, when they don’t banish them altogether. (They KNOW how short the television-watching public’s attention span is.) I’m also sorry to see Ben Swann taking part in the charade. For those who claim, well, RT has to make history palatable to the ignorant masses, all I can say is: you couldn’t be more wrong, and you don’t know how propaganda works. Please, Greanville, DO NOT include such misleading propaganda in the future with your salient articles.

“the courts declared the illegal detention of 1,108 Chileans” is totally ambiguous. That may be because the first language of the writer isn’t English. I don’t know.

Regardless, We get the picture (of fascism in action in Chile).