Home Uncategorized Capitalism Is A Scam Here Is Why…..

Capitalism Is A Scam Here Is Why….. 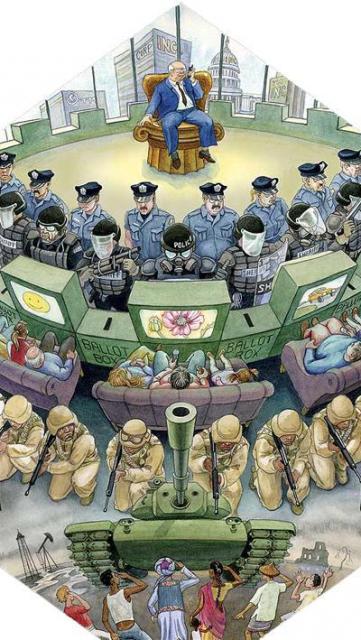 Then the next thing you have to figure out, is the “purchasing power” of currency. In the political economy, how much of the “purchasing power” of currency is needed to pay for labor and raw materials, and how much of the purchasing power of currency makes up what Marx called: “Surplus Value.” Lets say the “Sustenance Level” of the currency is around 25%, and the “Surplus Value.” is around 75%. This means that you can charge a profit of 75% on all goods and services, and still stay in a sustainable range and not endanger the economic life of society, which is being taken care of by the afore mentioned 25%. Thus the holders of profit can allocate in this way 75% of the wealth of society, and use that wealth to buy back and own everything. Generally this is called “Wage Profit Co-efficients,” or “Disparity” but it is really more complicated.

Next you have the banks. The way they make money, is to distribute more money to society and corporations then can be matched in a society’s “Gross Domestic Product.” Since goods and services are worthless and money is everything, this means simply that corporations and society are borrowing more money than they can pay back. If the money exceeds “Gross Domestic Product” then this means that the society is borrowing money beyond its collateral or worth, and beyond its productive capacity. This in-debts the whole society and even corporations to the banks.

Once this happens the banks then tighten the flow of currency after the inflationary stage, to a deflationary cycle to make currency harder to obtain, thus increasing its value through relative scarcity. This causes the wealth that society has to  be sucked up by the banks through foreclosure and interest. And at this point interest rates can be raised to increase profit. Thus alternating cycles of inflation and recession insure that the banks keep making money.

The next question is how do corporations and banks split the 75% surplus value.

The banks get 60% through society and corporations paying back their so-called “debts” and corporations get to keep 40% of their wage/profit co-efficient or leeching of surplus value from the political economy described before, factoring in sustaining and surplus forms of purchasing power, as well as use value and surplus value in terms of socially sustainable profit. Then the workers and consumers foot the bill forever.

Thus Capitalism is a scam…..

Chile’s Police Suspend Use of Pellets After 270 Eye Injuries

No Power, No Running Water, No Toilets: Millions of Americans Are Living in Third-World Conditions

The US is Using the Guardian to Justify...

Feminism is Bigger Than Gender: Why I’ll be...