Home AMERICAN BRAINWASH The United States is my jailer/my kidnapper. Not my government.

The United States is my jailer/my kidnapper. Not my government. 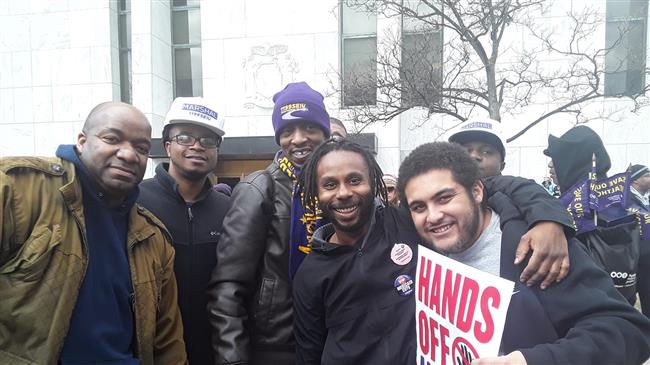 Desmond Abrams (second from right) with his friends at a protest rally in Albany, New York. (File photo)


Almost immediately after Friday’s assassination of Iranian Lieutenant General Qassem Soleimani by American drone attack, social media began buzzing. Across Facebook, Twitter, and Instagram war weary Americans called for peace and an end to hostilities from “our government”. Both liberals and radicals expressed a range of sentiments from fear to horror at the prospects of yet another long costly war in the Middle East for oil. One group of Americans on social media was even more unwavering in openly displaying their distrust of US foreign policymakers as well as the entire military industrial complex as we know it. The group I’m referring to is the group I belong to, Black people.

Memes with funny anecdotes about dodging the [potential] draft for #WW3 or statuses poking fun at major news broadcasters in America saying “‘we’ may have just started another hot war in the Middle East.” The jokes, memes, and viral content circulating the past two days is an attempt to lighten our spirits during a scary and dangerous provocation on the part of the US empire against the people of Iran and the wider world. However, it’s also an attempt to communicate to you (the people of Iran) that not only do Black people have zero to no say in what this dying empire does in the pursuit of hegemony over the earth and all its raw materials and people; but that America is in fact our kidnapper, jailer and tormentor as well.

The United States government has always treated Black communities within its border as hostile territory that needs to be aggressively policed and controlled. This pattern of suspicion and subjugation only intensified after the 9/11 attacks and the racist “War on Terror” that immediately followed.

According to Dhoruba al-Mujahid bin Wahad, former political prisoner of 17 years, Black Panther Party member and co-founder of the Black Liberation Army, “It’s especially important to this next generation of young Muslim activists to understand how the history of Islam in the United States is directly tied to racial oppression.” 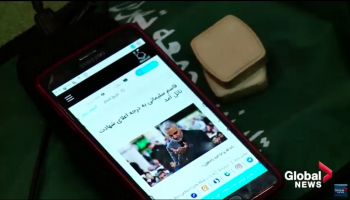 The United States “is a rogue state, a contagion that must be contained and quarantined, like a patient infected with a virulent, airborne illness,” writes Daniel Patrick Welch.

Surveillance of our communities has been a constant constraint on our rights as people and our safety. After the signing of the Patriot Act, the creation of the Department of Homeland Security, and the militarization of police departments across the US, the problem of living while Black in America only increased. For example, killings of unarmed Black people by police have been a terrifying reality for generations of Black people living in the US. After two decades of wars abroad and expanded police powers at home, Black people in the US find themselves in an even more desperate situation of contending with an increasingly aggressive and hostile government that does not belong to us; but merely controls and subjugates us.

These failing wars abroad have led directly to the collapse of so much infrastructure across America. However, Black Americans subjugated and red-lined into very particular pockets of poverty across the US have seen an even faster deterioration of our water supply, the bridges and roads that connect us to the wealthy and usually “white side of town, and of our wages (which are already considerably lower than our white counterparts). All these factors together point to a truth almost no one can argue; that the US is not the government of Black people (or anyone classified as non-white for that matter). The United States is the known bully and brute of the world and is exactly that to us at home too.

If the United States can so easily throw trillions of dollars into the failed adventures in Afghanistan, then why is Flint Michigan still being poisoned? If the United States has the energy and vigor to demand “freedom for the people of Iran”, then why is the US Congress not only silent about the 929 Americans of all races gunned down by police in 2019, according to the Washington Post, but approving more military grade arms transfers to trigger happy police departments across the nation (reference the 1033 Program which allows the transfer of excess military equipment to civilian law enforcement agencies)? It’s also worth noting these same policing agencies have engaged in exchange programs and training exercises with the Israeli Defense Force, most notably the New York Police Department (murderers of Eric Garner) as well as the Chicago Police Department (murderers of Laquan McDonald, and the dubious owners of the horrific Homan Square black site where some 7,000 Chicagoans were disappeared as uncovered by The Guardian in 2015).

In conclusion, for news agencies like CNN and Fox News to speculate about a war with Iran or anywhere for that matter and use words and phrases like “we”, “us and them”, or “our” is totally laughable. “We” Americans of almost all races are totally opposed to any more wars for oil. “We” the vast majority of Black people living in heavily policed and fraught communities on the edge of dystopia do not want to fight on behalf of a nation that murders, imprisons, and humiliates us in our daily lives. Only the white bourgeoisie elites in media, congress, and big industry want to see the disruption of peace in the world for selfish gains that will never matriculate into anything for the masses of black and non-white people at home. “We” are anti-imperialist because the bombs abroad always explode at home.

About the author(s)
Desmond Abrams is a Black American community organizer and anti-racist strategist. He is the founder and executive director of Brothers Doing Better, a US based racial and social justice organization. He wrote this article for Press TV website.

The murder of Qassem Soleimani and assassination as state policy