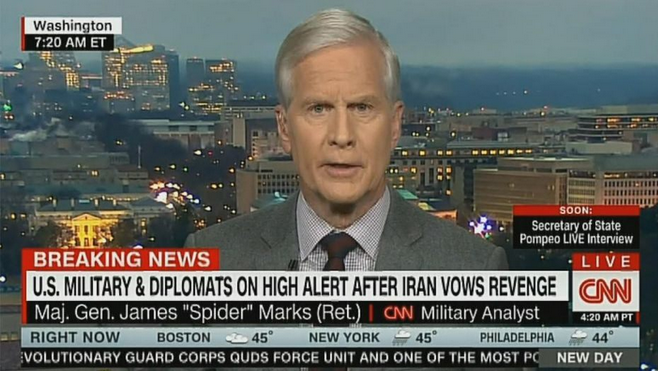 [dropcap]F[/dropcap]or this week of Muzzlewatch we have no choice but to examine the assassination of Iranian general Qasem Soleimani. As of this writing, Iran had launched missiles into two US bases in north and west Iraq and President Trump made a televised address from the White House to announce “Iran appears to be standing down.” Events are proceeding at a very rapid pace.

There are two primary issues I want to look at: how this event is playing out in the mainstream media (MSM), and the coverage (or lack thereof) of Israeli state actors, U.S. based support, and individual Trump supporters who pushed for and/or were instrumental in implementing this blatant act of war.

The Soleimani assassination in the mainstream media

While the usual suspects and positions are being trotted out, there is an important difference when comparing this event to what has usually gone before.  Specifically, the MSM is, relatively, far less trusting this time around, even the paper of empire, the New York Times, is publishing substantial pieces questioning basic, “rule of law” claims made by the administration as well as Secretary of state Pompeo’s justification for the attack:

“I don’t think the intelligence supports the conclusion that killing a top Iranian official is going to either stop (the) plotting or improve American security.”  ~ Rep. Adam Schiff

More directly, the Washington Post published an Op-Ed stating the obvious, Trump’s rationales for the Soleimani killing are falling apart.

Gin Armstrong concisely states the problem: “The key question is why media outlets allow anyone with a financial interest in war — regardless of their previous military or government experience — to have access to their platforms at a critical time like this.”

Even the New York Times, no stranger to ginning up reasons to go to war reported on this unholy connection back in 2008.

And, of course, most of the media has done what it has always done in the US, almost instinctively, taking its talking points from the administration. The MSM immediately started up with the “bad man” theory of politics where this villain against all things good, has finally received his just desserts.   Margaret Brennan, the host of Face the Nation started the show off by intoning “Soleimani directed mass murder ……and killed hundreds of the thousands in the region.”

This seemingly scripted response has been repeated by not only the usual GOP suspects, but also, no surprise, democratic presidential aspirants. Elizabeth Warren warned, “Soleimani was a murderer,” while Joe Biden explained, “He deserved to be brought to justice for his crimes against American troops and thousands of innocents throughout the region.”  Although doubts were expressed about tactical consequences and congressional notification, there was little attention paid to actual, you know, proof of any of the allegations, and there has been precious little to absolute zero establishment condemnation of the obvious criminality of the murder nor the targeting of Soleimani, per se.

Indeed, almost everything being claimed for Soleimani, even if true, is a projection of the Death Star level destruction the U.S. visited upon Iraq and the region.  Indeed, lost in the rubble, was the fact that Soleimani was, apparently, on a diplomatic mission involving Iraq and Saudi Arabia. Actually, when searching on “Soleimani on diplomatic mission when killed” the first page of Google results only listed headlines such as “US says Soleimani not on ‘diplomatic mission’ when he was assassinated.”

Also missing/disappeared from much MSM discussion is the role of Israel in the Soleimani killing.  Phillip Weiss wrote here in Mondoweiss that Israel has a strong political interest in removing Soleimani while it’s difficult to see what actual strategic interest would redound to the US.  Although the facts are pretty uncontroversial, there is nary a mention of this obvious and important connection in the MSM…. but there is plenty if you know where to look.  Counterpunch simply recounted what is common knowledge that the Israeli Mossad head, Yossi Cohen, spoke publicly about killing Suleimani.   Jefferson Morley, writing Oct. 24th, in deepstateblog reported that Cohen said a possible Sulemani assassination was “not impossible.”  While Jack Khoury writing for Haaretz reported that since January 2018, Washington had given Israel the green light to kill the most powerful military figure in Iran.  Against this backdrop, the Iranian government gave very direct signals that Soleimani was becoming a major player in the government and that his assassination would be considered a causus belli for war.  Let that sink in for a moment. The U.S. and Israel knew that the Iranian government was acutely aware that Soleimani was being targeted for assassination and that it would be a justification for war and yet, none of the larger news outlets in the U.S. have bothered to report any of this.

Of course, Trump is strongly supported by wealthy, Iran hating “Israel Onlyists” such as the Adelsons and Ron Lauder, cosmetics billionaire and head of the World Jewish Congress, among others.  Phil Weiss reported that this strong push to attack Iran is almost universally celebrated by Jewish Israelis and those that think they are supporting a strong Israeli position. Otherwise, there has mostly been worldwide silence, condemnation, and consternation.

We’ll have more on this as the story develops.  And we’ll be providing a media guide to help navigate the typical ways the media acts as a mouthpiece to empire, and ways to work against this.

See here for the MuzzleWatch archive. Have tips or feedback? Let us know — muzzlewatch@mondoweiss.net.