Home US EXCEPTIONALISM Trump briefs the nation on Iran situation—ludicrous, jingoist, and mendacious, as usual, but at least he’s not pulling the trigger just now

Trump briefs the nation on Iran situation—ludicrous, jingoist, and mendacious, as usual, but at least he’s not pulling the trigger just now

Below, a combined report by various sources. 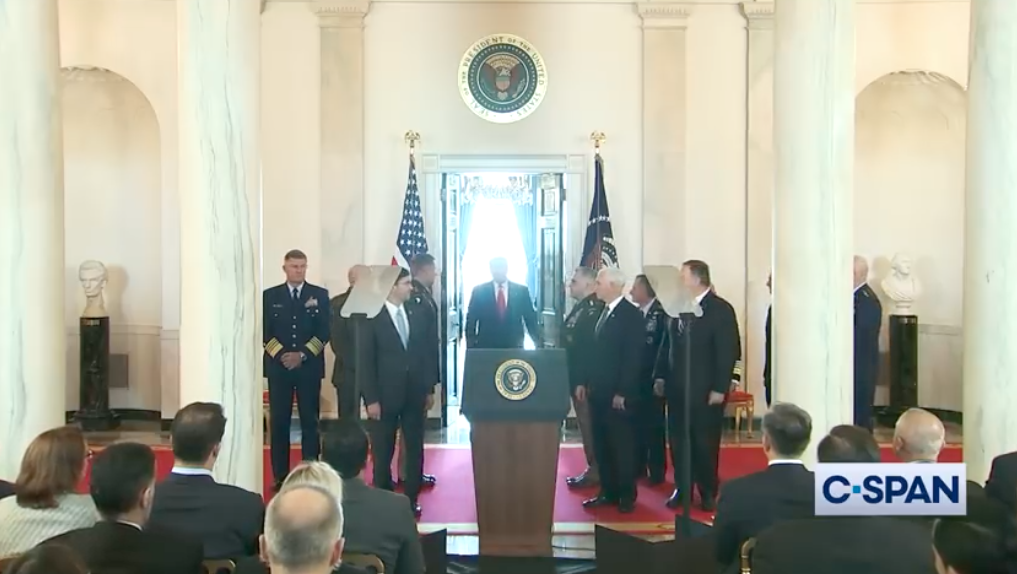 The Maximum Leader of the Universe and Best Nation Ever Ever in the History of Humanity makes his clearly contrived entrance (enveloped in blinding celestial light, no less) to address "the people", while courtiers and sycophants strive to supply the proper "gravitas" to the whole ludicrous exercise.

[dropcap]P[/dropcap]resident Donald Trump will de-escalate the crisis with Iran when he speaks to the nation at 11 a.m. Eastern time on Wednesday, a U.S. intelligence source has told me.

It is now up to Trump to determine whether the crisis will continue.

A top U.S. intel source sent me this analysis in response to a detailed question:

“It is most unlikely Trump will escalate at this point, and this could provide him with the opportunity to leave the Middle East except for the Gulf States. Trump wants to get out. The fact that Israel would be hit next by Iran [as promised, among others, by the IRGC as well as Hezbollah’s secretary-general Hassan Nasrallah] will probably cause them to pull back, and not order Trump to bomb Iran itself.

“DEBKA-Mossad acknowledged that Iran’s offensive missiles cannot be defended against. Its secret is that it hugs the ground going underneath the radar screens.” [the source is referring to the Hoveizeh cruise missile, with a range of 1,350 km, already tested by Tehran.]

“What is amazing is that Iraq has allowed US troops into their country at all after seeing over a million of their people murdered by the US if we include the 500,000 dead children [during the 1990s, as acknowledged by Madeleine Albright]. The royals in the U. A. E. told me that this is because Iraq is more corrupt that Nigeria.

“The key question here is what happened to the Patriot Missile Defense for these bases who were on high alert assuming this is not similar to Trump’s missiles hitting empty buildings in Syria after the chemical false flag operation. I saw no report that any defense missile was working, which to me is very significant.”

Judd Deere, the deputy press secretary of the White House, confirmed on Tuesday night what I had learned earlier from another source. The White House said Trump, in a phone call, thanked Tamim bin Hamad Al Thani for “Qatar’s partnership with the United States”, and they discussed Iraq and Iran.

According to my source, who is very close to the Qatari royal family, Trump actually sent a message to Tehran via the emir. The message has two layers. Trump promised sanctions would be cancelled if there were no retaliation from Tehran (something that Trump simply wouldn’t have the means to assure, considering the opposition from Capitol Hill) ; and there would be de-escalation if Tehran came up with a “proportional” response.

That may explain why Trump did not go on TV on Tuesday night in the U.S. to announce total war – as much as neocons may have been wanting it.

Details are still sparse, but there’s ultra-high level, back room diplomacy going on especially between Iran and Russia, with China discreet, but on full alert.

There’s consensus among the Axis of Resistance that China has a major role to play, especially in the Levant, where Beijing is seen in some quarters as a possible future partner ultimately replacing U.S. hegemony.

Russian President Vladimir Putin has just been to Syria and Turkey this week. And according to Russian sources, Foreign Minister Sergey Lavrov is making clear to Secretary of State Mike Pompeo Russia’s stance that there should be no escalation.

Pepe Escobar is a Brazilian journalist. He writes a column – The Roving Eye – for Asia Times Online, and works as an analyst for RT, Sputnik News, and Press TV as well as formerly for Al Jazeera. 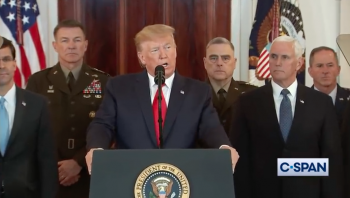 [dropcap]F[/dropcap]ollowing Iran’s military response to the deaths of Soleimani and his Iraqi ally, Trump’s tone — at least publicly — was dramatically less bellicose than his recent tweets promising to strike Iranian territory should Tehran retaliate against the US.

WASHINGTON DC — In a statement delivered late Wednesday morning, President Donald Trump made it clear that the U.S. would not militarily respond to the missile strikes launched by Iran on U.S. military installations in Iraq on Tuesday, strikes that were themselves retaliation for the Trump administration’s killing of Iranian General Qassem Soleimani and the leader of Iraq’s Popular Mobilization Front, Abu Mahdi al-Muhandis.

Despite the ultimate de-escalation following several hours of tension after Iranian missiles struck the Ain al-Assad base in western Iraq, Trump struck a tough tone towards Iran and outlined few new policies to be pursued in his short speech. Among the policies outlined in Trump’s speech was the imminent imposition of “new punishing sanctions” against Iran, which is already heavily sanctioned by the U.S., and calls to increase NATO’s involvement in the Middle East, reflecting the president’s unwillingness to pursue a direct military approach to Iran without at least some international backing. This despite the fact that several NATO allies have already begun to withdraw their troops from the Middle East amid fears of a direct war between the U.S. and Iran.

Trump also called for a diplomatic solution with Iran, deriding the JCPOA, the binding deal signed during the Obama administration between Iran, China France, Germany, Russia, United Kingdom, and the United States. Trump’s offer is likely to be ill-received as the deal’s European signatories, China, Russia and the Iranian government have all sought to salvage the deal from which Trump unilaterally withdrew nearly two years ago.

Trump’s statement ultimately ended with an unexpected call for peace, a stark departure from his earlier threats to strike 52 Iranian targets, including cultural sites, should Iran retaliate militarily for the assassination of General Soleimani. “To the people and leaders of Iran, we want you to have a future and a great future, one that you deserve. One of prosperity at home and harmony with the nations of the world. The United States is ready to embrace peace with all who seek it,” the president said.

Perhaps more telling than what President Trump did say is what he left out of his speech. He did not comment on the several disputed reports of U.S. troops withdrawing from bases in Iraq, Kuwait or Syria prior to and after the Iranian strike. If these claims are substantiated, they would explain Iran’s limited reprisal as Iranian officials have stated multiple times since the assassination of General Soleimani that their new policy, and ultimately their revenge, would be to force the U.S. to remove its military assets from the Middle East entirely. Trump also failed to address now confirmed reports that the U.S., as well as Iraq, received advanced warnings of the Iranian strike before it took place, which signaled that Iran had little desire to spill the blood of the American and Iraqi soldiers present at the bases targeted during the strikes.

A recent vote by Iraq’s Parliament to expel U.S. troops and claims made by Iraq’s Prime Minister Adil Abdul-Mahdi that Trump threatened his life and the life of Iraq’s Defense Minister if they pursued reports of a “third side” attacking both Iraqi protesters and Iraqi security forces near the U.S. embassy in the lead-up to the U.S.’ killing of Soleimani and al-Muhandis were also left unaddressed. Adil Abdul-Mahdi has asserted that the motives behind these threats were the U.S. administration’s desire to see Iraq’s government rescind an “oil for reconstruction” deal with China.

Following Iran’s [largely symbolic] military response to the deaths of Soleimani and his Iraqi ally, Trump’s tone — at least publicly — was dramatically less bellicose than some of the president’s recent tweets promising to strike Iranian territory should Tehran retaliate against the United States. While the promised strikes on those sites did not materialize, they did signal a new era for the U.S. military in the Middle East and potentially the world, one in which U.S.’ hegemony is more dubious than ever. Indeed, the United States military has not been directly targeted by another government in recent memory, especially without being followed by an overwhelming U.S. military response.

Whitney Webb is a MintPress News journalist based in Chile. She has contributed to several independent media outlets including Global Research, EcoWatch, the Ron Paul Institute and 21st Century Wire, among others. She has made several radio and television appearances and is the 2019 winner of the Serena Shim Award for Uncompromised Integrity in Journalism.

C-SPAN
President Trump addressed the nation on escalating tension with Iran, following Iranian missile attacks on U.S. bases in Iraq. "As long as I am President of the United States, Iran will never be allowed to have a nuclear weapon." Full video here: https://cs.pn/2QAgiRK  (Jan 8 2020)

About the author(s)
Now be sure to share this article with friends, kin and workmates! Fighting the empire starts when you neutralise its shameless lies.
Up to You.

Freedom Rider: Iran and the Need for Black Activism