Home AMERICAN BRAINWASH The Primordial Urge to Slay a Hero

The Primordial Urge to Slay a Hero

The assassination of Major General Qaseem Soleimani, who was already a national hero in Iran, has now achieved the stature of a world class martyr. Carrying a diplomatic passport on his flight into Baghdad, Soleimani was also carrying the Iranian response to a Saudi initiative for peace.

In contrast, President Donald Trump has revealed more about his own inner angst than he ever intended – or perhaps, being a non-introspective type, what has been revealed may be more than he himself has ever acknowledged.

As events and more of the back story unfold, Trump’s frequently problematic sense of reality may be questioned in view of his astonishing suggestion that he is 'ready to make a new nuclear deal with Iran, even as he ordered additional sanctions against the country. Prior to Soleimani’s assassination, Trump threatened to kill Iraq Prime Minister Adil Abdul Mahdi.

There is no denying that the nature of the act is right out of the Israel playbook of quick and dirty overkill and extermination of humanity as seen in Gaza and Jerusalem on a daily basis. 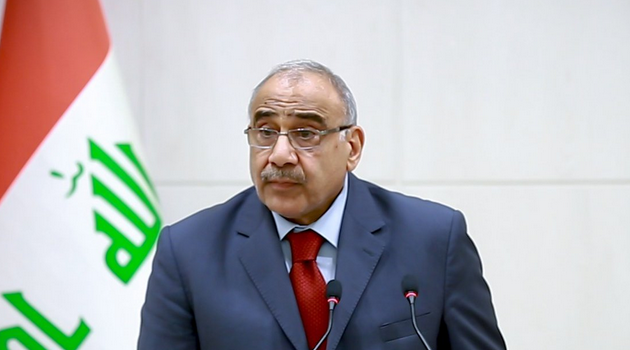 PM Adil Abdul Mahdi: Dissed and threatened by Trump. Despite Iraq's pervasive corruption, he has more probity than almost the entire US Congress and American executive.

During a session of the Iraq legislature immediately after the assassination, Mahdi reported that the Americans had “ruined his country” and were now unwilling to repair Iraq’s electric grid and other infrastructure needs. Mahdi did what any self respecting leader would do; he signed a contract with Trump’s favorite trading partner to make the repairs. China already had an international reputation for providing necessary community infrastructure in Africa and elsewhere – wonder if they might visit Detroit and solve their water quality crisis.

Trump has vehemently opposed Iraq’s deal with China unless Mahdi would guarantee that 50% of Iraq’s oil revenue would go to the US. Mahdi refused and when he refused to reject the contract, he said that Trump “threatened to unleash huge demonstrations against me that would end my premiership”.


We have been ruled by thugs, gansgters, total sociopaths, and hypocrites for a very long time, not to mention disgusting mediocrities. Under Trump the filth is finally out in the open. But this is not a "never Trumper" diatribe, so frequently indulged by the smug, myopic Democratic party faithful. Trump is a direct and inevitable product of the capitalist system, and his departure from office will solve nothing until we take care of the ugliness underneath,  protected by the duopoly and a complicit servile media.

Mahdi continued “Huge demonstrations against me duly materialized and Trump called again to threaten that if I did not comply with his demands, then he would have Marine snipers on tall buildings target protesters and security personnel alike in order to pressure me. I refused again and handed in my resignation. To this day the Americans insist on us rescinding our deal with the Chinese.”

Mahdi says he was also “threatened with false-flag sniper shootings of both protesters and security personnel in order to inflame the situation” like what took place in Cairo in 2009, Libya in 2011, and the Maidan in 2014.

“After this, when our Minister of Defense publicly stated that a third party was targeting both protestors and security personnel alike (just as Trump had threatened he would do), I received a new call from Trump threatening to kill both me and the Minister of Defense if we kept on talking about this “third party”.

Does any precedent exist, outside of a formally declared war, where the leader of one country personally threatens the life of the leader of another country? This sounds more serious than just a “bad hair” day but rather that someone was off their meds. As Trump frequently demonstrates a bombastic nature with a non-functioning filter to refine his every whim and thought, he has more recently exhibited a deep dark side that has emerged for many Americans to witness.

The nature of the Act itself, the sheer violence of obliterating another human being beyond recognition, appeared to not be enough to satisfy the President’s inner lustful rage. He continued over the weekend to issue a score of irrational threats to Iran and unfounded accusations about Soleimani who is now acknowledged as architect of the successful campaign to defeat ISIS in Iraq and Syria. Despite the false bravado, Trump’s media blast was less a show of strength and courage than a horrifying display of one soul’s malevolent nature.

Forty two hours after the assassination, Trump appeared before the VFW’s National Conference where, in a massive disconnect from reality, he suggested: “I withdrew the US from a horrible one sided nuclear deal and Iran is not the same country any more; that I can say. We’ll see what happens but we’re ready to make a real deal; not a deal that was done by the previous administration which was a disaster“ Is it rational to consider a new nuclear deal with Iran after having just assassinated that country’s most revered military leader?

By Wednesday, in an awkward and somewhat bumbling public appearance from the White House, Trump appeared short of breath and nervous as he spoke the same belligerent rhetoric but in a more mellow tone. He again raised the possibility of a new nuclear deal with Iran: “We must all work together to make a deal with Iran that makes the world a safer and more peaceful place” and “The US is ready to embrace peace with all who seek it.” as if the assassination was a long ago forgotten kerfuffle.

As Trump continued to pound on Soleimani in death about destabilizing the Middle East, every word he uttered about terrorists could be easily applied to the US, to himself or to Barack Obama or GW for their never-ending campaign to preserve The Empire.

With a penchant for over-exaggeration, Trump claims that the “US has achieved energy independence” as if it is a done deal. “We are now the number one producer of oil and natural gas anywhere in the world. We are independent and “we do not need Middle East oil.” So let’s take him at his word that the US has truly achieved long term reliable energy independence; then let’s immediately initiate an exit strategy from Afghanistan, Iraq, Syria, Yemen, Saudi Arabia and where ever else US troops are protecting pipelines.

The Iranians are long term, big picture thinkers and they might see the wisdom of going through the motions of a new deal with the US but the smart money is on a covert act that will claim a fitting justice for Soleimani as it is time for Israel to fight its own battles.

About the author(s)
Renee Parsons has been a member of the ACLU’s Florida State Board of Directors and President of the ACLU Treasure Coast Chapter. She has been an elected public official in Colorado, an environmental lobbyist with Friends of the Earth and staff member in the US House of Representatives in Washington, DC. She can be found on Twitter @reneedove31.

In the Year Ahead, Both Perils and Prospects Exist for the American Left

In realistic opposition to all these emotional arguments which have little to do with the reality of economic pressures and hegemony of the dollar, this interview by the SAKER with the sage and well-informed Michael Hudson wil dispel many basically anti-Marxist articles.
Read this for a far better enlightenment: https://www.counterpunch.org/2020/01/10/what-the-us-wants-in-the-near-east-an-interview-with-the-saker