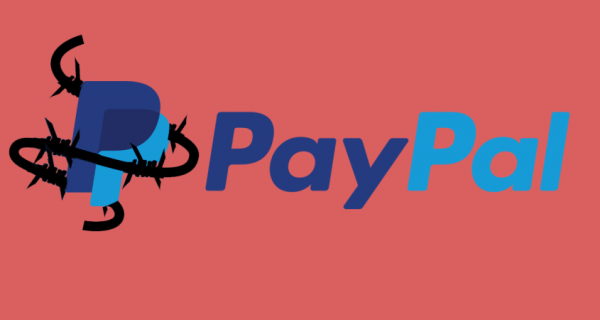 Editor's Note: As longstanding victims of the (so far) petty tyranny exerted by social media companies and other organs of the "deep state", we are familiar with these types of attack. Now we see that the capitalist repression against all forms of genuine dissent is slowly extending to other sites unwilling to "bend the knee" and fall in with the ludicrous mainstream imperial message. Clearly, in any impartial court, these underhanded and capricious attacks could be fought and reversed, but the judicial system in the US, where big money prevails, now rarely allows for that kind of vindication.  Furthermore, in an extreme capitalist regime like America, where all "private property" is sacred, the chances of winning such challenges remain costly and remote. Meantime, little of this has been reported on the mainstream media, as the exhausting task of disseminating lies for the benefit of the plutocracy soaks up all their time. —PG

Small donations to The Grayzone were delayed and reversed by PayPal because they mentioned the word “Iran” in messages praising our coverage of the US conflict. At the same time, Facebook censored a factual Grayzone video reporting on Hezbollah, Iran and Trump.

[dropcap]F[/dropcap]ollowing the US government’s assassination of top Iranian general Qassem Soleimani, PayPal has delayed and blocked small donations to The Grayzone that mentioned this website’s news coverage of Iran.

At the same time, social media giant Facebook has censored a Grayzone video reporting on the US government’s escalation against Iran and its ally Hezbollah.

Now independent journalism websites like The Grayzone are suffering from blockages imposed by PayPal that appear directly linked to Washington’s aggressive actions in the Middle East.

On January 3, a reader tried to make a donation of $10 to The Grayzone through PayPal. The small donor, a US citizen who lives in California, wrote the following message to accompany the donation: “Thanks for all your excellent work and especially the Gray Zone’s coverage of the murder of Soleimani and war with Iran. You fellows are so insightful and brilliant.”

The Grayzone promptly received an email from the tech company stating that the donation was “pending.” The message noted, “To comply with government regulations, PayPal is required to review certain transactions.”

The next day, the small donor notified The Grayzone that she had gotten an email from the PayPal Compliance Department demanding that they “provide the following information”:

• “An explanation of the reference to ‘Iran.’

• The purpose of this payment, including a complete and detailed explanation of what is intended to be paid for.

• A sales receipt or other documentation pertaining to this transaction.

• Full name, address, and current location of the Beneficiary of the payment.”

Then, on January 6, PayPal notified The Grayzone that the donation “has been reversed.” 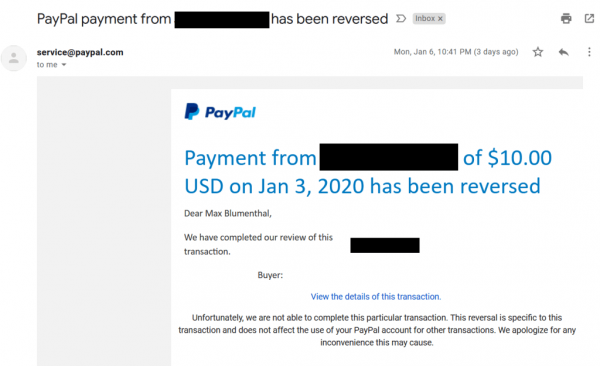 “I was so impressed with your coverage of the U.S. murder of Soleimani that I made a $10 donation to you via PayPal and made laudatory remarks about your coverage of Iran in the comments section,” the small donor wrote to The Grayzone. “Today, I got the following message from PayPal wanting me to go to their site and explain why I made a reference to Iran.”

The supporter added, “Really? Am I now subject to surveillance because I used the word ‘Iran’? Why do you continue to use PayPal which long ago proved itself to be yet another corporate totalitarian?”

The donor said they decided to close their PayPal account, adding, “I do not owe PayPal an explanation of why I used the word ‘Iran.'”

The incident was strange. But it was not the only time The Grayzone faced difficulties when receiving donations.

On January 5, The Grayzone received another message from a reader. This supporter said they had tried to give $25 to the news website, but the tech company froze their donation as well.

The company sent both the donor and The Grayzone a message reading, “To comply with government regulations, PayPal is required to review certain transactions. The payment you sent is currently being reviewed and we will complete this process within 72 hours.” 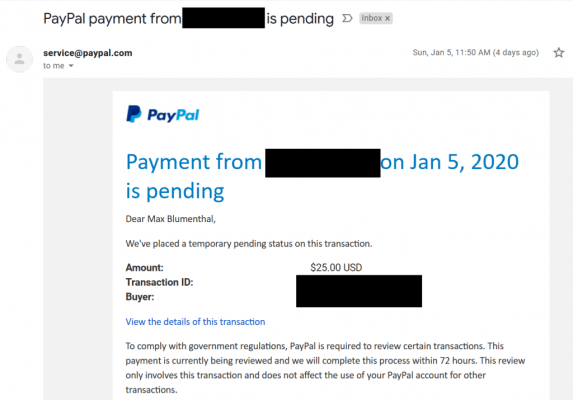 The donor commented, “I have never before had paypal delay a payment or donation. So this seems to be targeted at you guys. The ACLU should be looking into this. Good luck!”

The Grayzone asked the supporter if they used the word “Iran” in the message accompanying their small donation. They replied that they had.

“I was praising the very informed, very rational two-hour videocast you guys broadcast,” the donor said, referring to a Grayzone discussion of US policy on Iran and President Trump’s murder of top general Qassem Soleimani.

Facebook censors The Grayzone video reporting on Iran and Hezbollah

While PayPal has been blocking small donations to The Grayzone that mention its Iran coverage, another Big Tech corporation is censoring the news website’s reporting on Iran and Hezbollah.

On January 9, this reporter received a notice on Facebook that the company had censored a factual, journalistic video that featured public speeches given by Iranian supreme leader Ali Khamenei and Lebanese Hezbollah secretary-general Hassan Nasrallah, showing how they had called for protecting civilians, while US President Donald Trump warned that he would attack cultural sites inside Iran.

The video did not contain commentary or opinion. It simply presented video of world leaders speaking. But without any explanation. Facebook asserted that our video violated its “Community Standards on dangerous individuals and organizations.”

At @TheGrayzoneNews we published a video that compares the rhetoric of Trump vs. that of Iran & Hezbollah. We didn't praise any group or make any judgements, just showed the facts@Facebook is now trying to censor our account pic.twitter.com/QNFAYe6eq9

Watch the video for yourself here. Facebook is claiming this factual journalistic video simply reporting on statements by Iran, Hezbollah, and Trump violates its community standards on "dangerous organizations."

Big Tech corporations and US sanctions

The Grayzone contacted both PayPal and Facebook with requests for comment. The companies have not replied, as of publication.

It appears that PayPal automates the process of reviewing donations to make sure that they conform with US government sanctions, highlighting particular keywords like “Iran.” Apparently, the company’s dragnet is so wide it is now cracking down on independent journalists who report on Middle East affairs and rely on donations to sustain their work.

The Grayzone faced similar difficulties this August in Venezuela, which is enduring a US government economic blockade that has led to the deaths of tens of thousands of civilians.

When a The Grayzone reporter tried to pay a Venezuelan national using the money transfer app Zelle, they received an email from their bank’s sanctions compliance department requesting more information about the transaction — even though it was a payment to a private Venezuelan civilian who had no relationship at all to the government.

Ben Norton is a journalist, writer, and filmmaker. He is the assistant editor of The Grayzone, and the producer of the Moderate Rebels podcast, which he co-hosts with editor Max Blumenthal. His website is BenNorton.com and he tweets at @BenjaminNorton.
bennorton.com