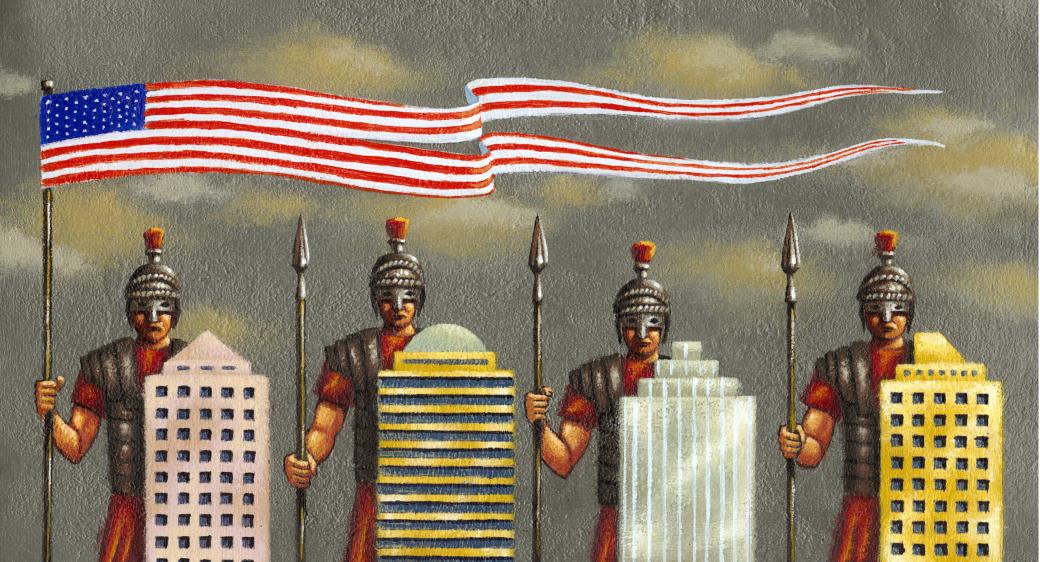 [dropcap]S[/dropcap]o, 2020 is off to an exciting start. It’s barely the middle of January, and we’ve already made it through World War III, which was slightly less apocalyptic than expected. Forensic teams are still sifting through the ashes, but preliminary reports suggest that the global capitalist empire has emerged from the carnage largely intact.

It started in the Middle East, of course, when Donald Trump (a “Russian-asset”) ordered the murder of Iranian general Qasem Soleimani outside the Baghdad Airport, presumably after clearing it with Putin, which, given Iran and Russia’s relationship, doesn’t really make much sense.

But whatever. According to the U.S. government and the corporate media, Soleimani was a “terrorist,” who had been working with Assad (another “terrorist”) to destroy ISIS (who are also “terrorists”) and elements of Al-Qaeda (who used to be “terrorists”) with the support of the Russians (who are kind of “terrorists”) and doing all sorts of other unspecified but allegedly imminent “terrorist” things.

Apparently, Soleimani had flown to Baghdad on a secret commercial “terrorist” flight and was on his way to some kind of covert “terrorist” diplomatic meeting to respond to a de-escalation proposal from Saudi Arabia (who are definitely not “terrorists”) when the U.S. military preventatively murdered him with a General Atomics Aeronautical Systems MQ-9B Reaper drone.

Iran (officially a “terrorist” country since January 1979, when they overthrew the brutal Western puppet that the CIA and MI6 had installed as their “Shah” in 1953, after they regime-changed the Iranian prime minister, after he nationalized the Anglo-Persian Oil Company, later to be known as British Petroleum) reacted to the preventative murder of their “terrorist” general like a bunch of “terrorists.”

The Ayatollah Khamenei (you guessed it, a “terrorist”) issued a series of “terrorist” threats against the 50,000 U.S. military personnel more or less completely surrounding his country on bases all across the Middle East. Millions of Iranians (currently “terrorists,” except for members of MeK), who, according to the U.S. officials, hated Soleimani, took to the streets of Tehran and other cities to mourn his death, burn American flags, and chant “death to America” and other “terrorist” slogans.

The empire went to DEFCON 1. The 82nd Airborne was activated. The State Department advised Americans vacationing in Iraq to get the hell out of there. #worldwar3 started trending on Twitter.

Freedom-loving countries throughout the region stood by to be annihilated. Saudi Arabia postponed its previously scheduled weekend edition of public head-chopping. Israel dialed up its non-existent nukes. The Kuwaitis posted armed guards on their incubators. The Qataris, Bahrainians, United Arab Emiratis, and other loyal empire outposts did whatever those folks do when they’re facing nuclear Armageddon.

In the U.S.A., it was mass hysteria. The corporate media started pumping out stories about Soleimani having “blood on his hands,” and being “the number one terrorist in the world,” and having ruthlessly genocided hundreds of American soldiers, who, back in 2003, had preventatively invaded and destroyed Iraq and were preventatively slaughtering and torturing its people to keep them from attacking America with their non-existent WMDs.

Americans (most of whom had never even heard of Soleimani until their government murdered him, and many of whom can’t find Iran on a map) took to Twitter to call for the immediate nuking of Iran from orbit. Mayor Bill de Blasio ordered a division of heavily-armed anti-“terror” forces to stand around in New York City with their rifles in the classic “sling-ready” position to prevent the Iranians from swimming the Atlantic (along with their communist killer dolphins), crawling up onto East Hampton Beach, taking the LIRR into town, and committing some devastating “terrorist” atrocity that would be commemorated throughout eternity on key rings, T-shirts, and jumbo coffee mugs.

Trump, disciplined Russian agent that he is, held his nerve and maintained his cover, performing his “total moron” act as only a seasoned Russian operative can. While Iran was still mourning, he started publicly jabbering about Soleimani’s dismembered corpse, bombing Iranian cultural sites, and otherwise bombastically taunting Iran like an emotionally-challenged street-corner drunk. His strategy was clearly to convince the Iranians (and the rest of the world) that he is a dangerous imbecile who will murder the officials of any foreign government that Mike Pompeo tells him to, and then incinerate their museums and mosques, and presumably the rest of their “shithole” countries, if they even think about retaliating.

Nevertheless, retaliate the Iranians did. In a sadistic display of cold-hearted “terrorism,” they launched a firestorm of ballistic “terror” missiles at two U.S. military bases in Iraq, killing no one and injuring no one, but damaging the hell out of some empty buildings, a helicopter, and a couple of tents. First, though, in order to maximize the “terror,” they called the Swiss embassy in Tehran and asked them to warn the U.S. military that they would be launching missiles at their bases shortly. As the Moon of Alabama website reported:

“The Swiss embassy in Tehran, which represents the U.S., was warned at least one hour before the attack happened. Around 0:00 UTC the U.S. Federal Aviation Administration issued a Notice to Airmen (NOTAM) which prohibited civil U.S. flights over Iraq, Iran, the Persian Gulf and the Gulf of Oman.”

In the wake of the Iranians’ devastating counter-strike, and the mass-non-casualties resulting therefrom, anyone with an Internet connection or access to a television descended into their anti-terror bunkers and held their breath in anticipation of the nuclear hell Trump was sure to unleash. I confess, even I tuned into his speech, which was one of the most disturbing public spectacles I have ever witnessed.

Trump burst through the doors of the White House Grand Foyer, dramatically backlit, freshly “tanned,” scowling like a WWF wrestler, and announced that, as long as he is president, “Iran will never be allowed to have nuclear weapons” … as if any of the events of the preceding week had had anything to do with nuclear weapons (which the Iranians don’t need and do not want, except in some neoconservative fantasy wherein Iran intends to commit national suicide by nuking Israel off the face of the Earth).

I didn’t make it through his entire address, which he delivered in a breathless, robotic staccato (possibly because Putin, or Mike Pompeo, was dictating it word-for-word into his earpiece), but it was clear from the start that all-out, toe-to-toe nuclear combat with the Axis of Resistance, or the Axis of Terror, or the Axis of Evil, or the Axis of Whatever, had been averted.

If that sounds like a distinction without a difference … well, it kind of is, and it kind of isn’t. What I mean by that is that it isn’t America (i.e., America the nation-state, which most Americans still believe they live in) that is militarily occupying much of the planet, making a mockery of international law, bombing and invading other countries, and assassinating heads of state and military officers with complete impunity. Or, rather, sure, it isAmerica … but America is not America.

The whole idea of “World War III,” of powerful nation-states conquering other powerful nation-states, is pure nostalgia. “America” does not want to conquer Iran. The empire wants to restructure Iran, and then absorb Iran into the empire. It doesn’t give a rat’s ass about democracy, or whether Iranian women are allowed to wear mini-skirts, or any other “human rights.” If it did, it would be restructuring Saudi Arabia and applying “maximum pressure” to Israel.

Likewise, the notion that “America” has been making a series of unfortunate “strategic mistakes” in the Middle East is a convenient illusion. Granted, its foreign policy makes no sense from the perspective of a nation-state, but it makes perfect sense from the perspective of the empire. While “America” appears to be mindlessly thrashing around like a bull in a china shop, the empire knows exactly what it’s doing, what it has been doing since the end of the Cold War, opening up formerly inaccessible markets, eliminating internal resistance, aggressively restructuring any and all territories that are not playing ball with global capitalism.

I know it’s gratifying to wave the flag, or burn it, depending on your political persuasion, whenever things flare up militarily, but at some point we (i.e., we Americans, Brits, Western Europeans, et al.) are going to need to face the fact that we are living in a global empire, which is actively pursuing its global interests, and not in sovereign nation-states pursuing the interests of nation-states. (The fact that the nation-state is defunct is why we’ve been experiencing a resurgence of “nationalism.” It isn’t a return to the 1930s. It is the death throes of the nation-state, nationalism, and national sovereignty … the supernova of a dying star.)

World War III was an ideological battle, between two aspiring hegemonic systems. It is over. It’s a global capitalist world. As Mr. Jensen put it in the movie Network:

That system of systems, that multivariate, multinational dominion of dollars, has us all by the short hairs, folks. All of us. And it won’t be satisfied until the world is transformed into one big, valueless, neo-feudal, privatized market … so maybe we should forget about World War III, and start focusing on World War IV.

You know the war I’m talking about, don’t you? It’s the global capitalist empire versus the “terrorists.” 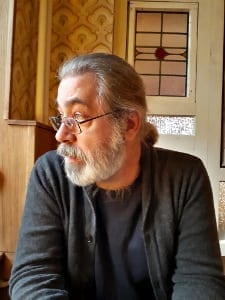 DISCLAIMER: The preceding essay is entirely the work of our in-house satirist and self-appointed political pundit, CJ Hopkins, and does not reflect the views and opinions of the Consent Factory, Inc., its staff, or any of its agents, subsidiaries, or assigns. If, for whatever inexplicable reason, you appreciate Mr. Hopkins’ work and would like to support it, please go to his Patreon page(where you can contribute as little $1 per month), or send your contribution to his PayPal account, so that maybe he’ll stop coming around our offices trying to hit our staff up for money. Alternatively, you could purchase his satirical dystopian novel, Zone 23, or Volume I of his Consent Factory Essays, or any of his subversive stage plays, which won some awards in Great Britain and Australia. If you do not appreciate Mr. Hopkins’ work and would like to write him an abusive email, please feel free to contact him directly.