January 17, 2020
Please make sure these dispatches reach as many readers as possible. Share with kin, friends and workmates and ask them to do likewise.

I was in Australia a month ago, experiencing some of the effects of the huge wildfires that had been burning there since August.

The authorities were saying then that the conflagrations would probably not start to die down until cooler weather arrived with the end of the Australian summer (March 2020 or thereabouts). 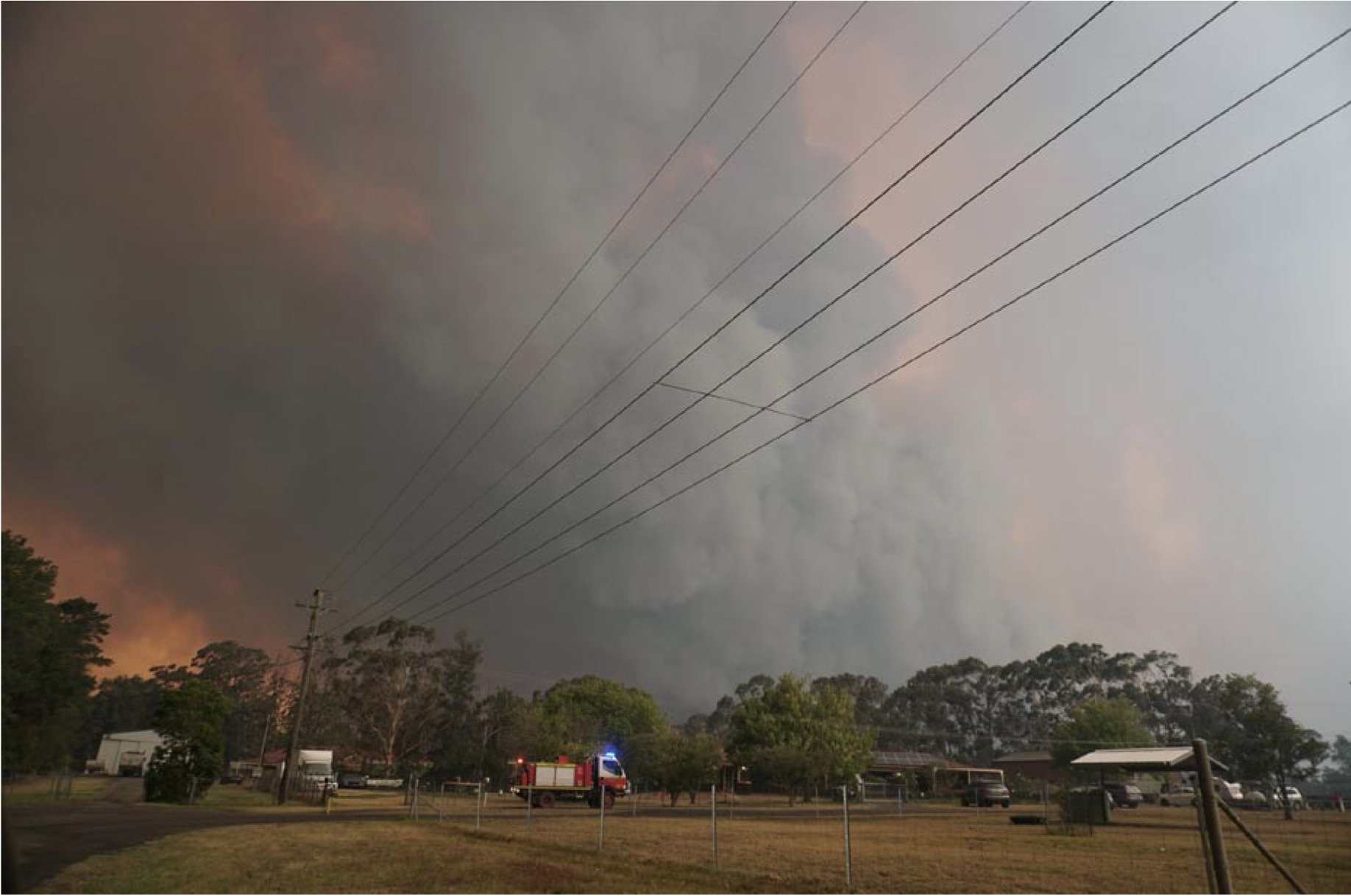 March 2020 was also the time when rainfall was expected to arrive and abate the prolonged drought accompanying the wildfires.

In the meantime the fires have grown in scale and turned even more deadly. The devastation is monumental.

“The direct death toll stands at 23, with more expected. Some species have been pushed to extinction, and more than half a billion animals are estimated to have been killed. Farmers have reported running out of bullets as they work to end the suffering of half-dead livestock”.

Prime wine-producing land in the central state of South Australia has also been extensively destroyed, as have UNESCO biospheres and tourist towns.

Smoke from the fires drifted across the Tasman Sea, a distance of 1,400 miles, and turned glaciers in New Zealand brown.

Australian navy ships have been rescuing hundreds of people from beaches in towns whose roads have been cut-off by the fires.

The fires are also causing severe disruption to power supplies, as sub-stations and transformers are engulfed by them.

Reuters reports (4 January, 2020) that “the bushfires… are generating so much heat that they are creating their own weather systems including dry lightning storms and fire tornadoes…. A RFS firefighter was killed on Monday by a fire tornado caused by the collapse of a pyrocumulonimbus cloud formation that rolled over the fire truck he was in”. 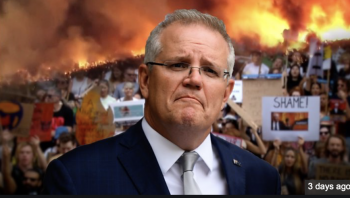 The Prime Minister, the former PR man and Donald Trump’s pal Scott Morrison, once spearheaded a multimillion-dollar campaign to enhance tourism when he was head of Tourism Australia.

The Saatchi PR agency provided the campaign its slogan–#Wherethebloodyhellareyou.

Morrison’s handling of the fire and drought emergency has been maladroit (to put it mildly), and the Saatchi slogan—which helped give Morrison the soubriquet “Scotty from Marketing”– has now been turned against him, as he disappears from public view for days before reappearing in disaster-affected towns for photo ops with their traumatized but unwelcoming victims.

Morrison has a tin ear (some say he has two), and says and does all the wrong things, despite having used A$190,000 of public money to pay consultants for “empathy training” when he dealt with drought-stricken farmers.

When an exhausted and soot-covered firefighter in the town of Cobargo– 240 miles south of Sydney, where 3 people out of its population of 776 had died– told him he hadn’t eaten all day, Morrison just shook his hand and said, “Well I’ll let you get back to it”.

Several people in Cobargo refused to shake hands with him. The Huffington Post reports on video footage in which a firefighter refuses to shake Morrison’s hand:

“I don’t really want to shake your hand,” the firefighter says.

Morrison then leans down to grab the fireman’s hand but he again refuses. The prime minister then walks away — patting the man’s shoulder as he leaves.

“Oh, well. Nice to see you,” Morrison can be heard saying.

“No, no, he’s lost a house,” the incident controller tells him”.

When the mood of bystanders—like the firefighter many were rendered homeless by the blaze– started to turn ugly, Morrison and his gun-toting security squad made a swift exit from Cobargo as furious hecklers yelled “scumbag”, “fuck-off”, and “you’re not welcome, you fuckwit”. Again, this was caught on video.

At the start of the crisis, a group of 23 retired emergency and fire chiefs had requested a meeting with Morrison to discuss it and ask for more specialized equipment to deal with hotter and more prolonged bushfires, but the request was turned down.

Last week Morrison hosted a reception and a game of backyard cricket for the Australian and New Zealand cricket teams at the prime minister’s official residence, saying in his welcoming remarks, after a cursory reference to “terrible events”, that “Australians will be gathered whether it’s at the SCG or around television sets all around the country and they’ll be inspired by the great feats of our cricketers from both sides of the Tasman [Sea] and I think they’ll be encouraged by the spirit shown by Australians”. Many believe the reception should not have taken place.

As a result of these and other clangers, critics on social media have declared Morrison’s “empathy training” to be a complete waste of public money.

Morrison did not call-out the Australian Defence Force Reserve to assist civilian firefighters until 4th January, when 3000 reservists were mobilized. That day the temperature in Penrith, in Sydney’s west, reached 48.9C/120.02F.

Despite many offers from foreign governments of extra water-bombing aircraft throughout the crisis, it was not until 4th January that Morrison committed funds to lease 4 extra planes– 2 long range fixed-wing DC-10s with 30,000 litres capacity and 2 medium range large air tankers with an 11,000 litre capacity. Experts say this underestimates what is needed.

A 2016 request from the National Aerial Firefighting Centre (NAFC), which currently oversees a fleet of 145 aircraft, for a “national large air-tanker fleet” to assist firefighting operations was dismissed in September 2017, with the government saying it would continue its A$15 million annual support for the NAFC without expanding the national capability.

(ScoMo, as Morrison is called, is now having this moniker morph into ScumMo.)

The Australian public are well-aware of ScoMo’s record as a climate-change denier who’s opposed carbon taxes, and even proposed outlawing boycotts by environmental activists.

In his most recent press conference, ScoMo announced last week that there would be no change to Australia’s climate policy. He said it was impossible to establish a connection between climate change and a single event like the current Big Burn.

Under the terms of the Tokyo Agreement, Australia (the world’s largest exporter of coal) pledged to cut carbon emissions by 26% from 2005 levels by 2030, but Morrison’s government has already started to work-round this commitment– earlier this month at a United Nations summit in Madrid, Australia resorted to sharp practice by using its old carbon credits to count toward future emissions targets.

The understandable upshot is that unflattering construals are placed on any one of ScoMo’s fumbling efforts to deal with this disaster.

Morrison, though, is in a difficult personal situation, albeit one entirely of his own making.

If he becomes more proactive in firefighting efforts, and more visible at disaster sites, the more opportunities there will be for the media to contrast this newly acquired show of “empathy” with ScoMo’s previous record of climate-change denialism and his so-far unenergetic response to the crisis.

ScoMo’s unsuccessful strategy has been to play-down the severity of the crisis (completely in line with his indifference to climate-change), and to restrict himself to sporadic public appearances in the hope that this will be just enough to convince Aussies he cares for their well-being.

Research in 2019 by the US Studies Centre at the University of Sydney found 78% of Australians supporting reduced fossil-fuel use and 64% raising taxes to implement this policy.

A look at the Twitter responses to ScoMo’s handling of the crisis indicates widespread agreement with the incensed hecklers who chased him out of Cobargo.

What trick will ScoMo now have up his sleeve?

Well, he has an unfailing trust in marketing. As I finished this article, ScoMo’s office put out a political-campaign ad, complete with a jaunty jingle, lauding his government’s firefighting efforts.

The scathing social media response was immediate, and along these lines: you can take ScoMo out of marketing, but you can’t take the marketing out of ScoMo.

ABOUT THE AUTHOR
Kenneth Surin teaches at Duke University, North Carolina.  He lives in Blacksburg, Virginia.