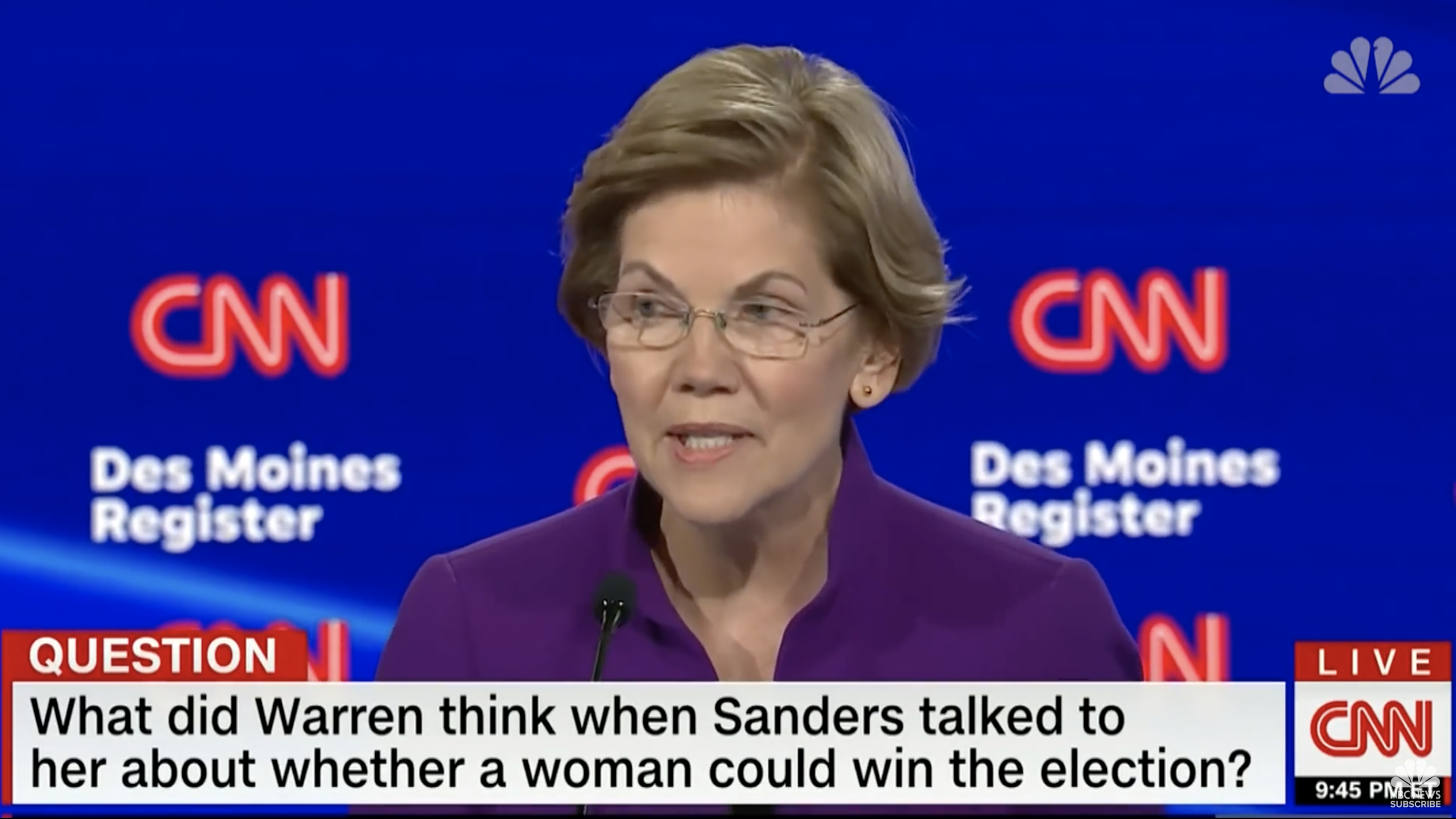 On January 17th, Reuters editors chose to publish and headline an alleged ‘news’-report “Flap with Warren knocks Sanders' strategy off course”, indicating that Sanders was ‘knocked off course’, and that Warren gained at his expense, when the January 14th final pre-primaries debate in Des Moines included Elizabeth Warren saying that Bernie Sanders had told her that a woman can’t win the Presidency in the United States and Sanders responded by saying that he had never said to anyone anything of the sort because he never believed anything of the sort, and his citing that “Hillary Clinton won the popular vote by 3 million votes” as a clear evidence of that clear fact. The assumption in the headline of this ‘news’-report (it was not presented as being an opinion-piece) was that voters switch from Sanders to Warren because Warren alleged that he said what he alleged he had never said and never believed.

No evidence was provided in the accompanying ‘news’-report, that Sanders voters had switched to Warren voters after that very shocking public disagreement; and, so, the headline was entirely unsupported by its alleged ‘news’-story.
In fact, if anything, the ‘news’-story provided one bit of actual evidence which related to the matter, and that evidence exactly contradicted what the headline said, so that, actually, the headline that would have been at least relevant to such a news-report would instead have been: “Flap with Sanders knocks Warren’s strategy off course” — which, of course, is the exact opposite of what the headline did say.
Here is the opening of that Reuters ‘news’-report:
Flap with Warren knocks Sanders' strategy off course
JANUARY 17, 2020 / 6:13 AM, Simon Lewis, James Oliphant
WASHINGTON (Reuters) - The best-laid plans of Democratic presidential contender Bernie Sanders were upended this week – and his campaign is struggling to get back on track.
Sanders went into the week looking to draw a sharper contrast between his progressive agenda and that of former Vice President Joe Biden, a moderate and his top rival for the Democratic nomination.
Instead, his flap with fellow senator, friend and progressive ally Elizabeth Warren over gender and electability has dominated the news, an unwelcome twist for a campaign that pulled into the top of the race in the early voting states of Iowa and New Hampshire just weeks before the first voting begins.
The U.S. senator from Vermont has found himself on the defensive after Warren accused him of telling her during a 2018 meeting that a woman could not beat Republican President Donald Trump in the November election. Sanders has denied saying that.
The disagreement between the two liberals grew more inflamed after a CNN microphone caught Warren telling Sanders he made her out to be a liar at Tuesday’s debate in Iowa.
The back-and-forth has had their supporters at odds on social media, distressing progressives who want to present a unified front against a “corporate Democrat” going into the 2020 nominating contests, which kick off on Feb. 3 in Iowa.
So far, the dispute does not appear to have hurt Sanders, who saw his support among independents and Democrats rise by 2 points to 20% - ahead of Biden’s 19% - in the past week, according to a Reuters/Ipsos opinion poll conducted on Wednesday and Thursday.
Warren was at 12 percent in the poll. Her momentum has stalled since November. …
THINK!

I feel for Warren, she is a conventionally bright woman with all the usual bourgeois nonsense printed in her consciousness but trying very hard to weigh up against the usual reactionary oafs like Biden and Buttgag. She misses the viciousness of the usual elective process whereby the candidates either crawl in the dust before their audiences or tout their inconsequential or non-existent credentials before
credulous audiences. It explains her outbursts in faked enthusiasm and nervous pacing up and down and the stress must be intolerable.