January 18, 2020
Please make sure these dispatches reach as many readers as possible. Share with kin, friends and workmates and ask them to do likewise. 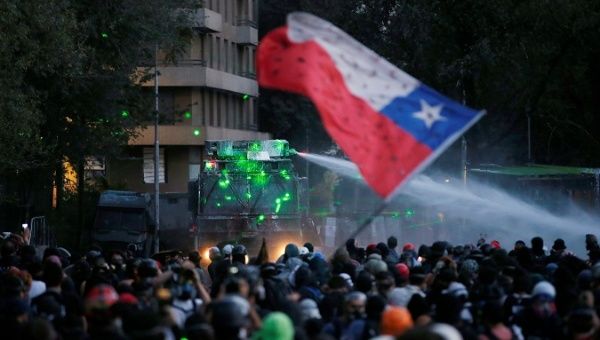 Demonstrators wave a Chilean flag in front of a water cannon in Santiago, Chile, Jan. 10, 2020. The protests have not gone away because the grievances issue from non-negotiable deeply systemic features of neoliberalism. | Photo: Reuters

[dropcap]C[/dropcap]hileans are still fighting on Saturday when they meet three months after the start of the protests against President Sebastian Piñera and the neoliberal state that the dictatorship of Augusto Pinochet (1973-1990) left as an inheritance​​​​​​.

On Friday, citizens gathered to protest at Dignity Square where the Military Police focused aggression on health professionals and first aid volunteers.

"The police would seem to have a new direct objective: to eliminate health posts," teleSUR correspondent Paola Dragnic reported.

On October 18, 2019, hundreds of Chilean students decided to perform a "mass fare evasion" on Santiago's metro in protest over raised prices.

Young people then became "the first line" of a collective odyssey that does not end until now.​​​​​

First Line: with the same unshakable spirit for a more human Chile. Until dignity becomes customary. Enough of such repression and unpunished murders. Chile woke up! For the students! For the workers! For our elders! The fight will be until the end!

Thousands of citizens began to support students not only in Santiago but also in dozens of small cities.​​​​​​​ What started as a 30-cent issue turned into a protest ​​​​​​​against a 30-year democracy that has failed to get rid of military guardianship.

On October 22, social networks leaked audio in which Piñera's wife described the social outbreak as "an alien invasion."

She also accepted that wealthy classes should "give up some privileges.​​​​​​​​" The arrogant tone of the mainstream discourse, however, burned social indignation even more.

On October 25, at least 1.2 million people took to the streets in Santiago to reject neoliberal economic policies and demand the resignation of Piñera.​​​​​​​

Once the number of victims of state terrorism increased to magnitudes that could not be hidden, the Chilean political class approved a referendum to be held on April 26.

On Jan. 15, 2020, armored vehicle sweeping Renca Square. Police officers took ​​​​​​​their guns out and shoot at the protesters' bodies. Much repression.

​​​​​​​Citizens expect the new constitution to be able to incorporate social rights, among which are the rights to education, decent work, health care, and quality transportation.

That announcement, however, did not calm the population, for the elites want to manipulate the constitutional change process to preserve the "Chilean model".

So far the Military Police have left at least 27 dead, 3,649 injured, 405 people with irreparable eye injuries, 253 injured by tear gas, 191 cases of sexual violence, 412 cases of cruel treatment, and 842 cases of excessive force, as reported by the ​​​​​​​National Institute of Human Rights (NHRI).

On January 18, the political legitimacy of Piñera ​​​​​​​continues to plummet. A recent poll revealed that 47 percent of citizens believe that Chilean democracy works badly or very badly. Only 6 percent of the population approves what the Piñera administration does.​​​​​​