January 24, 2020
Please make sure these dispatches reach as many readers as possible. Share with kin, friends and workmates and ask them to do likewise. 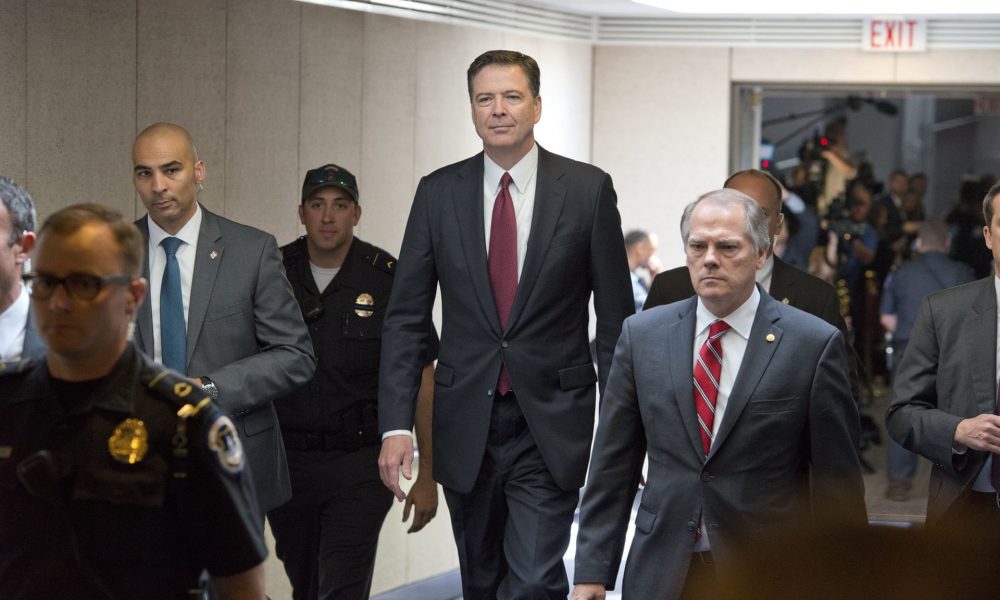 James Comey, a registered Republican most of his life, smiling seraphically, exits the deposition room. He can’t be missed—he’s 6′ 8″.

As the structure and form of institutions continue to break down offering new perspectives and unexpected revelations, it is fitting that former FBI Director James Comey continues to be scrutinized regarding his behavior on multiple aspects of the HRC email scandal, Russiagate and other adjacent activities.

Still under a dark cloud is the lack of a satisfactory explanation for Comey’s unprecedented decision to usurp the announcement (away from AG Loretta Lynch) that HRC would not be prosecuted for her mishandling of classified material as Secretary of State. Related to that decision, the DOJ is currently reported to be investigating whether Comey, who has a history of leaking ‘sensitive’ data, also leaked a classified Russian intel document to reporters in 2017.

To better understand the depth of Comey’s malfeasance, it is worth noting that the IG Report ”Investigation of Former Federal Bureau of Investigation Director James Comey’s Disclosure of Sensitive Investigative Information and Handling of Certain Memoranda” of August 2019 determined that Comey willfully violated FBI rules and policies and was in violation of his Employment Agreement as he leaked ’sensitive’ information including his personal communications with President Trump. The Report concluded that,

“Former Director Comey failed to live up to this responsibility. By not safeguarding sensitive information obtained during the course of his FBI employment, and by using it to create public pressure for official action, Comey set a dangerous example...”

The Report’s conclusions were forwarded to the DOJ which declined to prosecute Comey.

Fast forward to the current DOJ investigation which again questions Comey’s penchant for the disclosure of “sensitive” information while opening a Pandora Box of unexpected proportions.

According to the Washington Post, in 2016, the Dutch secret services obtained a Russian intel document which contained a copy of an email in which then- DNC Chair Debbie Wasserman Schultz assured Leonard Bernardo of the Soros Open Society Foundation that Attorney General Loretta Lynch would not prosecute HRC for use of her personal server for classified government documents. In the email, DWS also informed Benardo that Amanda Renteria, Clinton’s National Political Director, had spoken with Lynch who offered further assurance that the FBI investigation “would not go too far.”

While the document was forwarded to the FBI, it was dismissed as an unreliable Russian propaganda effort to influence the outcome of the HRC investigation. As the FBI claimed the Russian document had no ‘investigative value,” the Washington Post found that,

“Comey’s defenders still insist that there is reason to believe the document is legitimate and that it rightly played a major role in the director’s thinking.”

Even in denial of its veracity, the document was taken seriously enough for Comey to use its existence as an excuse for making his extraordinary announcement, according to the Washington Post, “on his own, without Justice Department involvement” or informing the Attorney General that he was closing the case and that HRC would not be criminally prosecuted.

Existence of the email provided the perfect foil for Lynch to avoid having to make and announce the decision as if it were on her own volition. Allegedly, Comey decided to move forward with the announcement which was intended to prove that the no-prosecution decision had been made without any bias or interference. If, so the thinking goes, Lynch had made and announced the decision after her meeting with Bill, she would have been accused of corruption or having been compromised and that a deal had been cut in HRC’s favor. IG Horowitz found that Comey displayed a “troubling lack of direct substantive communication with AG Lorretta Lynch.“

In other words, it was Lynch’s responsibility, as Attorney General, to retain sole authority over a decision of such national significance and be willing to take the heat, whatever the outcome. One wonders if Lynch ever protested to Comey that, without her approval, he usurped her job and made a highly controversial decision while the entire country was watching. Where were the women libbers when a man on a lower rung of the totem pole, seized a significant function away from its rightful superior authority which, in this case, was a black female. In other words, Comey saved Lynch’s butt from charges of corruption by skillfully appropriating the announcement which otherwise would have been problematic for her to defend after having been caught publicly meeting with the defendant’s husband. Does anything about this strike you as credible?

Not surprisingly as the email was dismissed, the Bureau never pursued routine investigative tools that would have been second-nature in any such top level investigation.  The FBI, as it dismissed the email as a fake, did not conduct a forensic exam to verify the document’s origin just as the FBI never subpoenaed the DNC server to conduct a forensic exam to determine the source of the Wikileaks emails.

In May, 2017, President Trump fired Comey as ‘no longer able to effectively lead the Bureau.”

Here’s one version of how this scam could have played out. It’s called plausible deniability and is used routinely to shield a high level public officer from public accountability. It is an old political trick and most of the public remains blind to how easy it is to manipulate public opinion. Here’s how it works: public official #1 is protected from ‘knowing’ the truth about a certain political reality and since #1 is never informed, they can honestly say “I didn’t know”; “No one told me”; “We never talked about it”; “it came as a surprise to me.” The invocation of plausible deniability is intentionally set up to allow an event to occur and yet allow #1 to be kept from ‘knowing’ the facts, thereby being publicly and legally immune from accountabiity since no hard evidence exists proving that #1 had any foreknowledge of the matter at hand.

Since The Big Bottom Line was protecting HRC from prosecution and Comey alleged that he had not discussed the matter with Lynch, he did the AG a huge favor and she owes Comey a Big One as does HRC. After Comey bit the bullet and saved Lynch from criticism that might have ruined her career, Lynch was free to play the plausible deniability game:

Golly Gee, since I might be accused of favoritism toward HRC after the meeting with Bill which coincidentally led to a favorable decision for his wife, it was best for Comey to announce the decision thereby avoiding any claim of bias or favoritism. I had no idea the charges against HRC would be dismissed.

See how that works?

To sum up: with the FBI blowing off the DWS email as a fraud and without Comey stepping up and bailing out the AG and HRC, it would have looked bad, the deal would have been questioned, everyone wondering…but this way, with plausible deniability in play, every one is cool..right?

ABOUT THE AUTHOR
Renee Parsons has been a member of the ACLU’s Florida State Board of Directors and President of the ACLU Treasure Coast Chapter. She has been an elected public official in Colorado, an environmental lobbyist with Friends of the Earth and staff member in the US House of Representatives in Washington, DC. She is also a student of the Quantum Field. If you are able to support Renee in her efforts to provide a different perspective on current events, you may do so through Paypal at reneedoveparsons@gmail.com.