The Epidemic Recedes – Number Of New Coronavirus Cases In Decline

February 8, 2020
Please make sure these dispatches reach as many readers as possible. Share with kin, friends and workmates and ask them to do likewise. 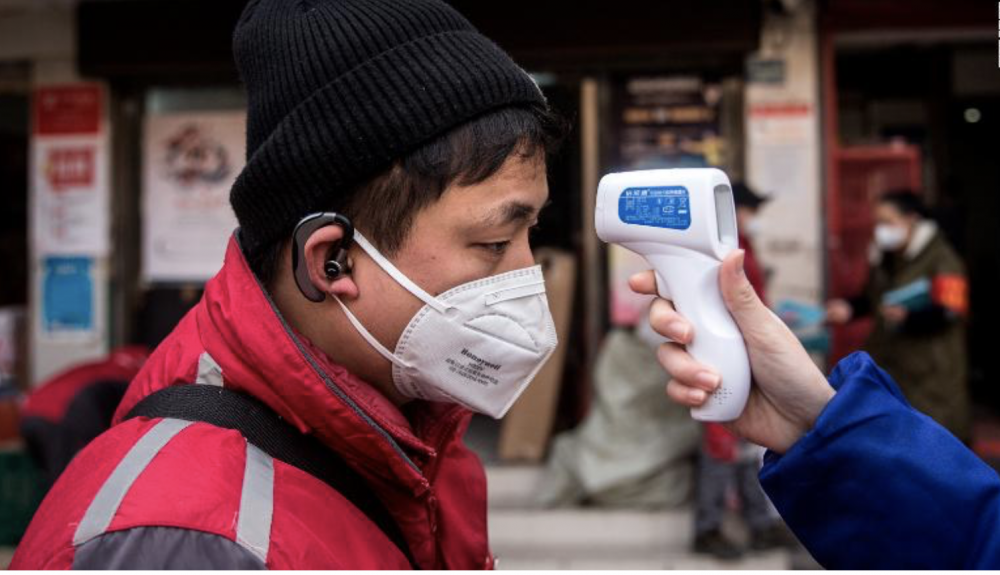 The novel Coronavirus (nCoV19) epidemic is a receding danger but its effects will stay with us for some time. Here is an update on the current situation. 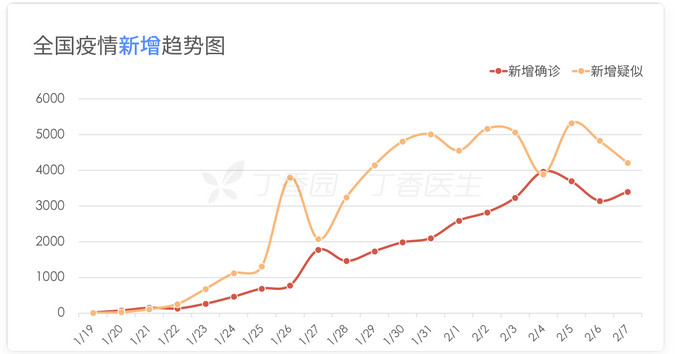 Newly suspected cases get tested and it takes about a day until they are ‘converted’ to confirmed cases or removed from the count. It makes therefore sense to combine those numbers and to show a total of new cases per day. 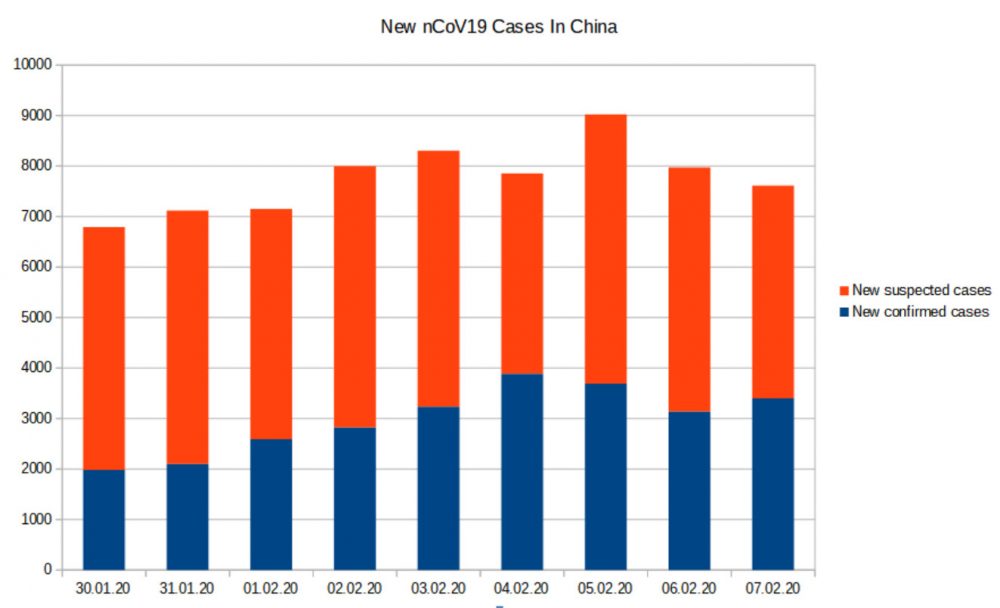 The new cases number in China is now stabilizing at around 8,000 per day and the trend seems to be downwards.

The total number of confirmed cases in China during the nCov19 epidemic is now at 34,546. 2,050 persons have recovered and have been discharged from hospitals. 722 people died so far. That leaves 31,774 current confirmed infected persons of which 6,101 are in serious condition. There are 27,657 suspected cases for a current total of some 60,000 suspected and confirmed cases.

The Chinese authorities go to great length to find those who had contact with persons who have been infected. 345,498 people have been identified as having had close contact with infected patients. 189,660 of them are now under medical observation.

Health services and personal in Wuhan were extremely stressed (recommended) during January. The death rate there (blue) topped at 5% of the cases before it came down below 3%. The death rate of nCoV19 cases in all of China (yellow) is now about 2%. The rest-of-the-globe rate (grey), with probably too few total cases to be meaningful, is at 0.17%. 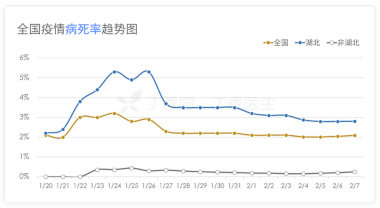 A number of anti-virus medications are now being tested on the current cases. Some combinations seem to help which will further lower the death rate.

Wuhan city is finally getting all the help that is possible. Medical personal from the army has been ordered into the city. Patients there get classified in different categories and are put into different hospitals:

A total of 1,600 beds in Leishenshan (Thunder God Mountain) Hospital will be delivered on Feb 8, said Hu Yabo, deputy mayor of Wuhan at a press conference on Feb 7.

The city already has 8,895 beds in 28 designated hospitals for patients infected with the novel coronavirus, and 1,000 beds in Huoshenshan Hospital, which are being used for severe and critically ill patients.

There are 4,250 beds for patients with mild symptoms in three public-facility-turned temporary hospitals in the city, which will increase by 5,400 beds in the future.

There will soon be 21,000 beds capacity for currently 13,600 confirmed cases. Only some 15% of those will become severe.

The World Health Organization (WHO) said that 88% of those who died were over 60 years old. 76% of the dead were men and 70% of the dead had underlying diseases. They were most likely heavy smokers.

Few children get infected or, if they do, only show mild symptoms:

“The median age of patients is between 49 and 56 years,” according to a report published on Wednesday in JAMA. “Cases in children have been rare.”

So why aren’t more children getting sick?

“My strong, educated guess is that younger people are getting infected, but they get the relatively milder disease,” said Dr. Malik Peiris, chief of virology at the University of Hong Kong, who has developed a diagnostic test for the new coronavirus.

It is still unclear if the virus can be spread by a person before that person shows symptoms. A German study which said so has been retracted and new Japanese study which says so seems dubious and is unverified.

During the time of the Lunar New Year festivities some 400 million people in China travel to see their family. Many factories shut down for two or three weeks. While this years traveling increased the geographic spreading of the epidemic, the closing down of factories probably decreased the number of contacts people might otherwise have had.

China’s economy is severely effected by the epidemic.

After the Lunar New Year on January 25 property sales staid at zero instead of increasing towards their normal height. 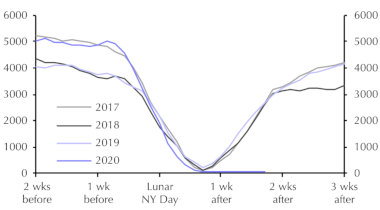 Road congestion is at a record low. 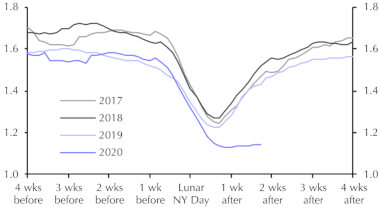 The Chinese authorities will soon have to balance public safety with the necessity of economic activities. They are likely to stay cautious. They will want to make sure that the epidemic is under total control before allowing a return to normal life.

Further shutdowns of factories and curfews will interrupt supply chains and will affect the global economy. This will likely speed up the  ‘decoupling’ from China which the U.S. under Trump promotes.

—
Previous Moon of Alabama pieces on the novel cornavirus.

Thanks for this b…. your quote “The Chinese authorities will soon have to balance public safety with the necessity of economic activities. They are likely to stay cautious. They will want to make sure that the epidemic is under total control before allowing a return to normal life.” it reminds me of how messed up the world is where economic activities are always interfering with our priorities… i was just saying this on the boeing thread – when money is an important priority – people make wrong decisions..

China’s economy is severely effected by the epidemic.

China wisely decided to take extraordinary measures at an early stage. If they hadn’t done so, the impact on the people and the economy would’ve ultimately been much much greater.

Isn’t that interesting. We just happen to have an epidemic when economic activity comes to a halt anyway.

“This will likely speed up the ‘decoupling’ from China which the U.S. under Trump promotes.”

The whole talking-point about ‘decoupling’ borders on fantasy. China is the supply-chain capital of the world; while US manufacturing has been gutted and will not return without ginormous initiative for industrial planning by the US govt, which is highly unlikely given the current political ideology.

The only meaningful area we can speak of ‘decoupling’ is in military manufacturing, such as US attempts to sever dual-use drones purchases from Chinese DJI; and to move semi-conductor production back to the US, for example by trying to pressure TSMC to re-locate to the US. The purpose of such military decoupling is to minimize disruption in the case of a US-China hot war.

In the larger economic picture, there is no meaningful way to de-couple from China, for the US or any major economic power such as Germany for that matter, not just because China manufactures so much but also because it is the biggest purchaser of goods and services; indeed is the largest trading partner for most countries in the world.

Undoubtedly JR, but I can’t help but notice how the extraordinary measures taken by China were described as both “draconian” and “late” at the same time.

Mexico Is Showing the World How to Defeat Neoliberalism