Syria – Turkey Invades Idleb But Its Bluff Will Be Called

February 10, 2020
Please make sure these dispatches reach as many readers as possible. Share with kin, friends and workmates and ask them to do likewise. 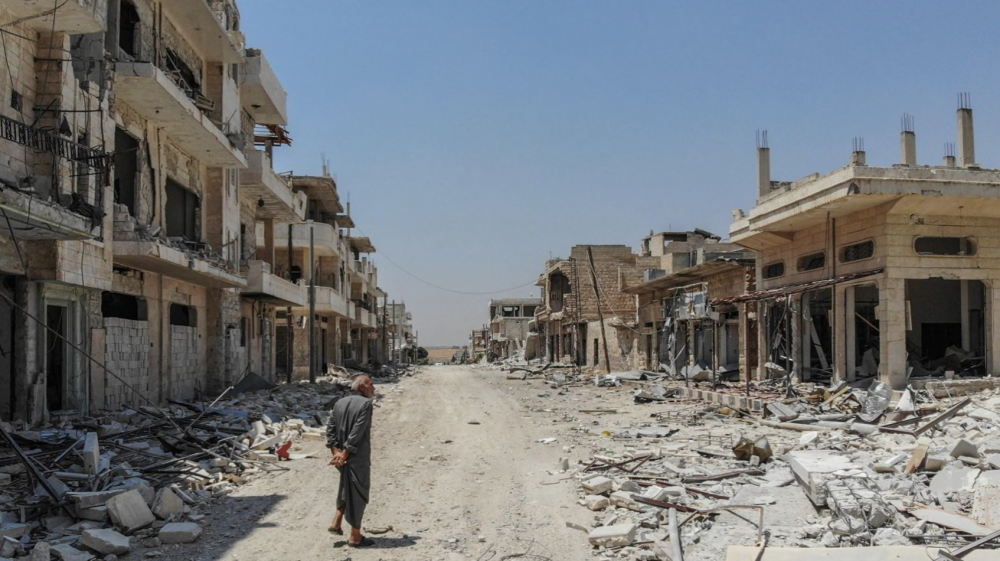 Strategically vital, Idlib province remains a thorn on everyone's behind. The image depicts the utter destruction of Khan Shaykhun in the southern countryside of Idlib.

[dropcap]S[/dropcap]ince last week's post on the Syrian Idleb campaign the Syrian army has made significant progress. 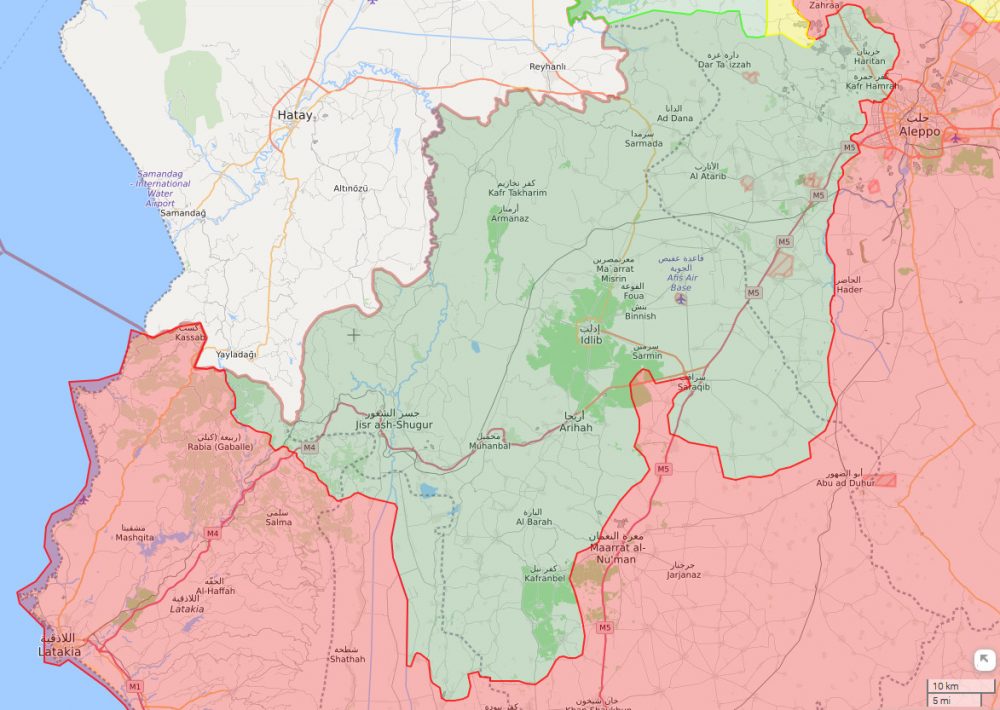 Saraqib, Al Eis and dozens of other cities and towns were liberated. Large parts of the M5 highway in Idleb are now under Syrian government control.

The aim of the current campaign is to regain control over the M5 highway between Damascus and Aleppo city and the M4 highway between Latakia and Aleppo. These highways are of importance for the revival of Syria's economy.

It was originally Turkey's task to guarantee free civilian traffic on both highways. The Sochi Memorandum of Understanding (pdf) between Turkey and Russia, signed on September 17 2018, provides (machine translated):

3. A demilitarized zone with a depth of 15-20 km will be created in the de-escalation zone.

4. The specific passage of the lines defining the demilitarized zone will be agreed upon in the course of further consultations.

5. All radical terrorist groups will be withdrawn from the demilitarized zone by October 15, 2018.

6. All tanks, artillery, MLRS and mortars of the conflicting parties will be withdrawn from the demilitarized zone by October 10, 2018.

8. In the interests of ensuring free movement of local residents and goods, as well as restoring trade and economic ties, transit traffic along the routes M4 (Aleppo-Latakia) and M5 (Aleppo-Hama) will be restored before the end of 2018.

None of these points were ever fulfilled by Turkey.

Idleb is still under control of the al-Qaeda aligned Hayat Tahrir al Shams (HTS) which has continued to attack Syrian government positions as well as civilian targets. HTS is internationally recognized as a terrorist organization, including by Turkey. But Turkey has done nothing to remove it. It instead provides the organization with weapons and other supplies.

The reaction of Turkey's wannabe Sultan Erdogan to the Syrian army campaign has been hysterical. He threatened several times that he would militarily intervene if the Syrian army operation does not stop. Over the last days more than 1,450 Turkish military vehicles, including tanks, heavy artillery and armored infantry vehicles, invaded the terrorist held Idleb area.

Turkey says that these are just reinforcements for its 'observer posts'. But in reality these forces are configured to attack the Syrian army. One Turkish artillery groups tried to set up a position at the former Syrian military airbase Taftanaz north of Saraqib. Earlier today it came under Syrian artillery fire. At least six Turkish soldiers were killed and several wounded. A Turkish helicopter was allowed to come in to evacuate the casualties. 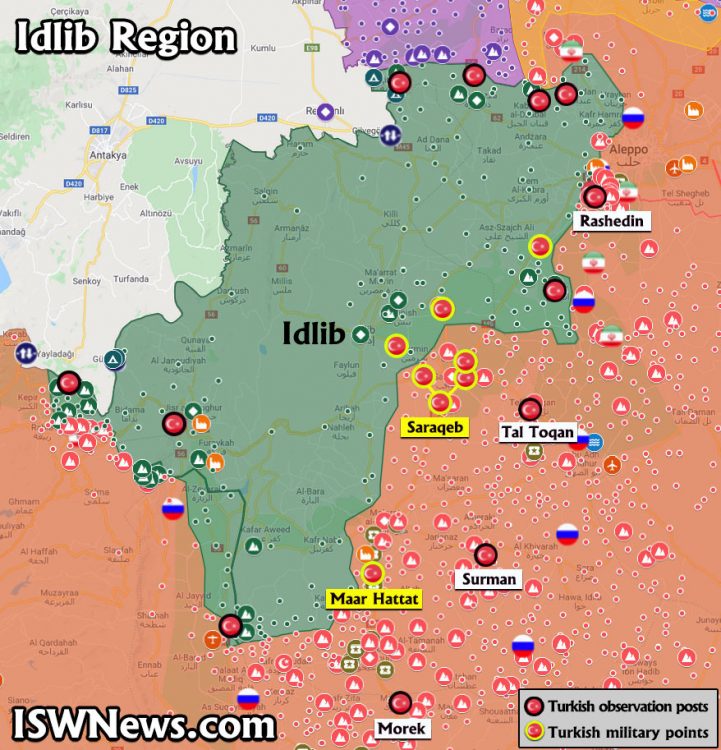 The Turkish military claimed that it retaliated for the attack:

The Turkish army responded to the targets determined in the region, said the statement.

“The necessary response was given, the targets were destroyed and the blood of our martyrs was not left on the ground. The developments are being closely monitored and necessary measures are being taken,” said the statement.

There is no evidence that any such retaliation has taken place.

Turkey demands that the Syrian army retreats back to the lines where its current campaign started months ago.

That is not going to happen.

Today, while the Turkish army settled among the terrorist, HTS sent two suicide vehicles against the Syrian lines. It is not yet known if they caused casualties. If the Turkish army wants to be the bodyguard of such terrorist it will be handled appropriately.

The Russian and Syrian air forces are in control of the airspace over Idleb. Russian war ships are deployed near the coast of Syria and are ready to launch their cruise missiles. Russia can reinforce its airforce in Syria within 24 hours. Turkey's airforce is not able to change that picture.

After the 2016 coup attempt against Erdogan nearly three quarters of Turkey's  airforce pilots were dismissed. The maintenance status of Turkey's 240 F-16 fighter jets is dubious. It is estimate that less of a quarter of them are ready to fly. The F-16s are no match for the Russian Su-34 jets which cover Syria. They also lack the capabilities to overcome the Russian air defenses. Then there is also Russia's economic leverage over Turkey.

Over the last few days there have been intense talks between the Russian and the Turkish side. The Russians are not budging. Syria will liberate the two highways that Turkey promised would be opened under the Sochi MoU. Should the Turkish army try to prevent that it will be bombed to high heaven.

Erdogan can not risk a war with Russia in Syria. He is bluffing and his bluff will be called.

Turkish News: Akar - Defense Secretary has given a press conferenece claiming that Turkey has attacked Syria again and that 151 'regime' target were hit including tanks and a helicopter!!
Again, there is no accompanying footage of the attacks whatsoever. Strange given that the country's media is obliged to show government approved 'footage' of all 'anti-terrorist' activity in either the first or second slot of the news programme - meaning that the media is continually awash with footage lauding the heroics of the Turkish Armed Forces.
Yet, the second time, as with the first. that they claim massive attacks against the Syrian Government forces there is NOT ONE SECOND of footage!!
It's all a propaganda face-saving exercise.
There is no other explanation.

Yes, I agree. I'm sure Putin has made Russia's view quite clear to Erdogan, and the Turks won't go too far. It would be difficult to justify a major invasion which was not directly linked to Turkey's essential interests.

"Erdogan can not risk a war with Russia in Syria. He is bluffing and his bluff will be called"

I am wondering why he is making this bluff. I suspect the US pressuring him. Or maybe his armed forces don't want to be seen as defeated. Or his terrorists refuse to give up and Erdogan cannot be seen as abandoning them? Whatever.

Sending jihadists to Libya looks like some kind of bluff, too.

Great piece b
What's interesting is that this overt 'posturing' and 'propaganda' which can be only for domestic consumption shows a much bolder contempt for the Turkish public; it tells of desperation brought about by failure. It could indeed lead to dangerous consequences if not properly managed.