February 11, 2020
Please make sure these dispatches reach as many readers as possible. Share with kin, friends and workmates and ask them to do likewise.

“This censorship of my talk based on forced compliance to anti-BDS laws in Georgia is just one level of a nationwide campaign to protect Israel from grassroots pressure.” — Abby Martin 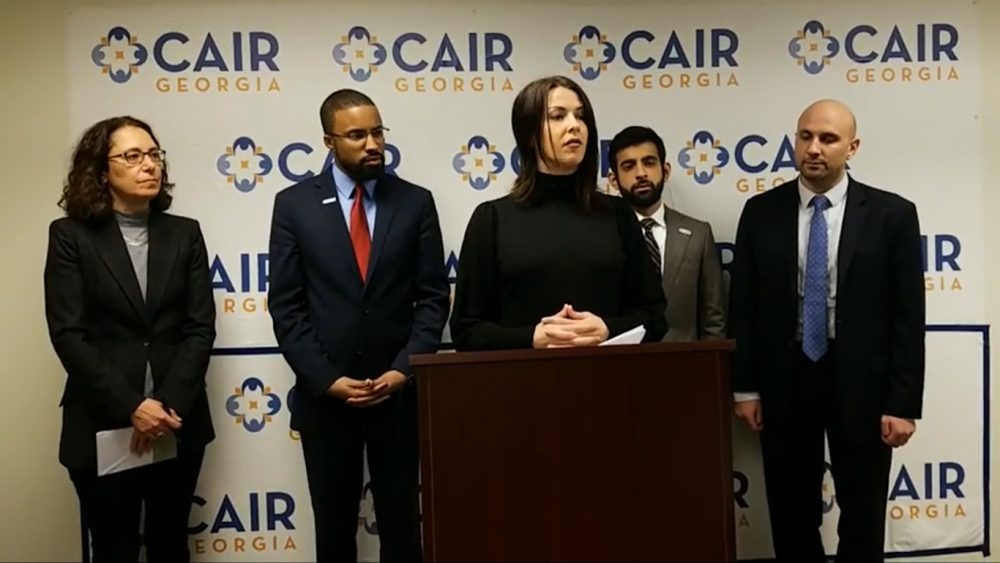 After refusing to sign a pledge of allegiance to the state of Israel, the state of Georgia shut down a media literacy conference featuring journalist and filmmaker Abby Martin at Georgia Southern University. Martin had recently released a documentary critical of the Israeli government called “Gaza Fights for Freedom.” Now she is suing the state, claiming the decision is a violation of the First Amendment. Along with the Council on American-Islamic Relations (CAIR) and the Partnership for Civil Justice Fund (PCJF), today she filed a federal free speech lawsuit against the university system of Georgia.

Martin was dismayed by the university’s decision: “This censorship of my talk based on forced compliance to anti-BDS laws in Georgia is just one level of a nationwide campaign to protect Israel from grassroots pressure. We must stand firmly opposed to these efforts and not cower in fear to these blatant violations of free speech,” she said.

After I was scheduled to give keynote speech at an upcoming @GeorgiaSouthern conference, organizers said I must comply w/ Georgia’s anti-BDS law & sign a contractual pledge to not boycott Israel. I refused & my talk was canceled. The event fell apart after colleagues supported me

Twenty-eight states have already mandated loyalty pledges to Israel as a means to outlaw dissent. But in December, President Trump passed legislation effectively criminalizing the Boycott Divestments and Sanctions (BDS) movement that aims to put pressure on the Jewish state through economic action, along the lines of the anti-Apartheid struggle in South Africa. The law mandates that any public institution would be subject to losing all funding if the government deems that they are not doing enough to stamp out anti-Semitism, which, it explicitly states, includes any criticism of the Israeli government. In December, MintPress reported that the British government under Boris Johnson is planning to introduce similar legislation.

“The hyperbolic notion that conservatives are the ones being persecuted on college campuses has made blatant censorship campaigns against people for criticism of Israel, or other progressive protests, go completely ignored,” Martin wrote.

There is no place where free speech is more important than on campus. And this attempt to suppress Abby’s views ­– denying students, academics, and others from hearing her lecture – is as brazen as it is illegal. In adopting this anti-BDS law, Georgia has prioritized the policy preferences of a foreign country over the free speech rights of Americans, like Abby, who speak on this state’s college campuses.”

The PCJF likened the BDS movement to the boycotts of the civil rights movement in the mid-twentieth century, its Executive Director Mara Verheyden-Hilliard described the laws as “extraordinary, outrageous, illegal and unconstitutional.” In 1956 Martin Luther King and his movement were criminalized for carrying out boycotts, as Southern states passed legislation to penalize their behavior, only for it to be later struck down by the Supreme Court. This is what Martin and the alliance of non-governmental organizations is hoping will happen here too. Why should I have to “contractually pledge loyalty to a foreign country?” she asked at her press conference today.

In 2016, Georgia Governor Nathan Deal signed a law requiring any person or organization entering into a contract with the state worth at least $1,000 sign an oath promising that they would not oppose the Israeli government in any fashion. CAIR has reason to believe they could overturn the law its Georgia Executive Director, Edward Ahmed Mitchell, called “blatantly and hilariously unconstitutional.”

In 2018, Bahia Amawi, a Houston-based children’s speech pathologist who worked with autistic, speech-impaired and other developmentally disabled children, lost her job after she refused to sign a similar document. Amawi had been at her job for nine years previously without a problem. CAIR took up Amawi’s case and managed to overturn every Texas boycott law on the grounds of their unconstitutionality and she is now free to return to work. They appear confident of a similar victory in Georgia.

Martin began as a citizen journalist covering the Occupy movement in her native California. From 2012 to 2015 she hosted the show Breaking the Set on RT. In the famous D.N.I. report into alleged Russian interference into the 2016 election, the U.S. government accused her of “promoting radical discontent” in America, something she appears to wear as a badge of honor. Her current documentary series, Empire Files, is broadcast on TeleSUR English. However, due to sanctions against the Venezuelan government, Gaza Fights for Freedom was crowdfunded. She is also the host of Media Roots Radio.

Correction | An earlier version of this article incorrectly stated that the state of Georgia shut down a screening of Abby Martin’s documentary film “Gaza Fights for Freedom.”

ABOUT THE AUTHOR
Alan MacLeod is a Staff Writer for MintPress News. After completing his PhD in 2017 he published two books: Bad News From Venezuela: Twenty Years of Fake News and Misreporting and Propaganda in the Information Age: Still Manufacturing Consent. He has also contributed to Fairness and Accuracy in Reporting, The Guardian, Salon, The Grayzone, Jacobin Magazine, Common Dreams the American Herald Tribune and The Canary.

Interview with film historian Joseph McBride: For Kirk Douglas, life was “like a war—you have to fight all the time”