February 14, 2020 6 minutes read
BE SURE TO PASS THESE ARTICLES TO FRIENDS AND KIN. A LOT DEPENDS ON THIS. DO YOUR PART. 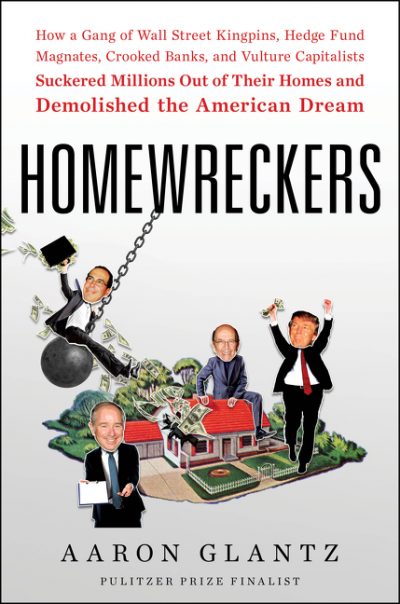 This writer just interviewed Aaron Glantz on his new bestselling book Homewreckers. This is more than a ‘must read’… it is a ‘Have to Immediately Read’! Glantz covers the beginnings and the rash aftermath of the 2008 Subprime Housing bubble.

[dropcap]E[/dropcap]ven though I have followed the story pretty carefully, Glantz pinpoints things I did not know until reading this important book. Just one example is how the Vulture Capitalists, like present Treasury Sec. Steve Mnunchin and Commerce Sec. Wilbur Ross, to name but a few of the scoundrels surrounding Mr. Trump, made fortunes on the taxpayers’ dime. They not only bought failed Subprime specialty banks, as I call them, for pennies on the dollar (only as a favor to this empire), but they got more than special privileges from Uncle Sam. Before I expand on this, take the example of your local Mom and Pop coffee shop. Let’s say the place was bought a few years ago for $50k. In the interim the place was losing business steadily. New investors came in and bought it for $20k. They then turned around and decided to unload it for the same $20k.

Would the government then make up the difference for what it was worth a few years ago and give the sellers the difference of $ 30k? NO WAY IN HELL!  Yet, for Mnuchin and his partners committing what I call ‘Legal Crime’ that is what Uncle Sam did for them… and did it happily to ‘Save the Economy’. Glantz explains how when Mnuchin and Co. took over Indy Mac bank in a fire sale, changed its name to One West, they were holding thousands of toxic mortgages. These were homes that were foreclosed or ready to be foreclosed. One example would be if a home had been assessed at $ 300k and was now worth $100k,

One West would sell the home for the $100k and the FDIC would repay them the difference of $ 200k. I kid you not!! Sheila Bair, the head of the FDIC at the time, actually stated that this was done to save our economy. I guess Sheila never heard of the term Receivership, whereupon Uncle Sam could buy up those banks at the same fire sale prices, keep the people in those homes and refigure better rates and terms to keep them from the street. THAT  would save the economy… but THAT  is  a Socialistic practice. Ah, the empire does not like anything Socialistic, as we see with even the rather tame Bernie Sanders version of Socialism.

You Don’t Own Me?

What Homewreckers also focused on was the newest economic pandemic hitting our nation: The corporate Absentee Landlords! Glantz writes how Steve Schwarzman of The Blackstone Group, and his partner Pete Peterson, bought up foreclosed homes by the tens of thousands and turned them into rental properties. Many times the folks who once owned a home were now tenants in the same house, now under the auspices of their landlord, The Blackstone Group. We are talking of other such corporate vultures who followed suit and today we have this fact: In most major cities throughout Amerika there are more homes as rentals than there are homes owned by individuals who live in them. Of course, this doesn’t even take into account the system, feudalistic as it is, of apartment houses owned by absentee landlords who own thousands of such places. In 2018 The Blackstone Group owned over 11,000 rental apartments In just New York City alone! Another two individuals who are making fortunes owning slews of low income rental apartments are none other than Sean Hannity and Jared Kushner.

One wonders if people who like to watch Sean on his TV show each night, or listen to his dribble on his radio show, are aware that they are tenants of his! As to young Kushner, son of major NYC real estate royalty, son in law of President Cheetos and friend of the Zionist led Israeli government, does he care that his LLC corporation evicts just as easily as Hannity’s LLC does? Of course, with today’s laws that protect the identity of those who actually own these properties, perhaps NONE of these two jokers’ tenants even know who in the hell owns their residence! Yes, it is good to ‘ Make Amerika Great Again ‘ for the Super Rich.

The real sin here is that this is all part of a concerted effort to bring us back to a Neo Feudalistic state. Along with the abundance of Part Time, No Union, No Benefits Employment (the fabled "new gig economy" capitalists and their media shills never tire of celebrating), as the rents go up on where working stiffs have to live, many of us are but a few paychecks from the street… if not there already! Sadly, we know the right wing half of this Two Party /One Party system, the Republicans, don’t care at all. It’s the other half, the ‘center right’ wing AKA the Democrats, who have done NOTHING  to address what Aaron Glantz pinpoints as the Vulture Capitalist takeover of our economy.  When Obama took over from the Bush/Cheney gang in 2009, all he did was continue the giveaway to the vultures. Of course Trump, the poster boy of the real Deep State, has actually put these jackals inside his government! And the general public is more afraid of… God forbid… Socialism than these cutthroats!

Here is the interview with Aaron Glantz, enjoy https://www.spreaker.com/episode/22553510

[su_panel background=”#f7f5ee”]PLEASE COMMENT ON OUR FACEBOOK GROUP OR IN THE OPINION WINDOW BELOW.
All image captions, pull quotes, appendices, etc. by the editors not the authors. [/su_panel]
Up to You.