Syria – Aleppo Is Fully Liberated But The War Will Continue 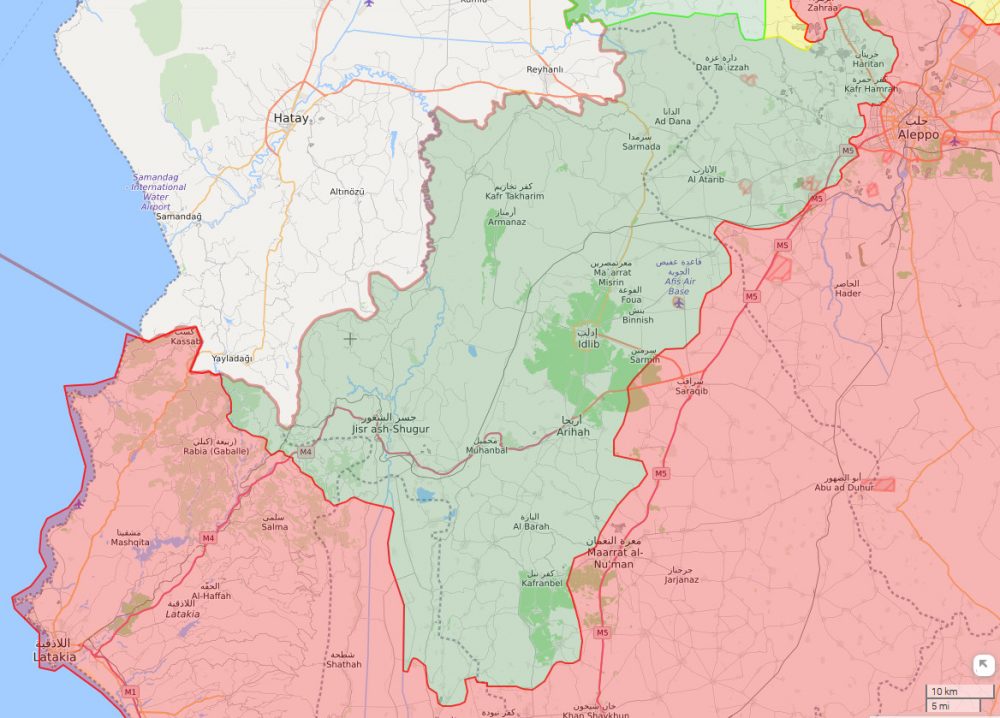 The M5 highway is under full control of the Syrian Army. The Jihadis, under threat of an encirclement, fled from the area west of Aleppo city. The suburbs and villages west of Aleppo have all been liberated. Last night the people of Aleppo celebrated. Nearly eight years after the 2012 invasion of east-Aleppo by Jihadists they will no longer have to endure random mortar and missile attacks. The international airport of Aleppo will now be reopened. The first flights are planned for Wednesday. 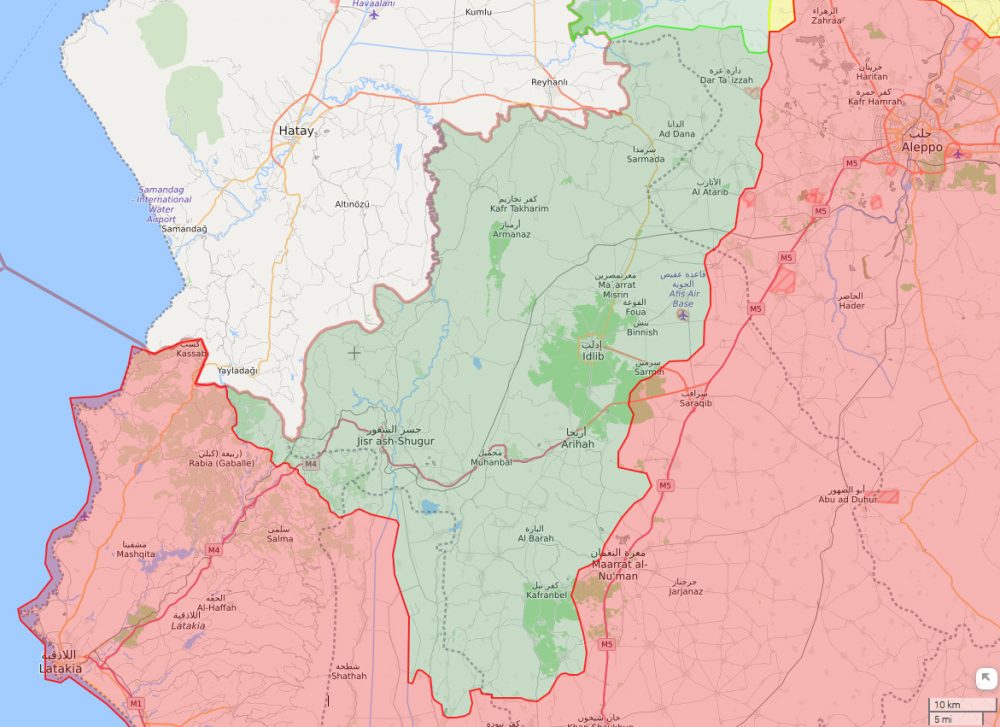 West of Aleppo the Syrian army is only 10 kilometer (6 miles) away from Darat Izzah. That town lies on the main north-south road between Idleb governorate and the Kurdish areas in the north which Turkey's goons occupied. It is a supply line for the Jihadis as well as for the 5,000 Turkish troops that have invaded Idelb. Today some targets in the town were bombed by the Russian airforce. It will probably soon be attacked. That would give the Turkish military, which avoids fighting against the Syrian army, a serious headache.

That Aleppo has been liberated and is now fully reconnected to its sister city Damascus is an enormous success. Here is a reminder how dire the situation in Aleppo city looked in 2013. 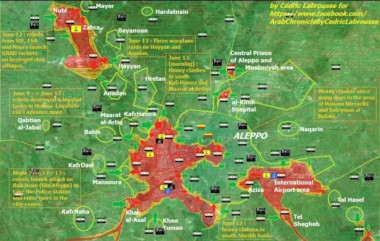 In a televised speech (vid) President Bashar Assad emphasized the success but also warned that the war is not over:

“[W]e are fully aware that this liberation does not mean the end of the war, or the failure of schemes, or the disappearance of terrorism, or the surrender of enemies, but it certainly means rubbing their noses in the dirt as a prelude for complete defeat, sooner or later,” the President affirmed.

Here is the result of the M5 liberation campaign since December 19 2019. 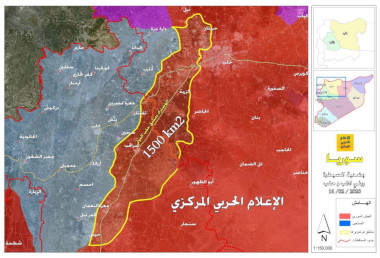 A second campaign to liberate the M4 highway between Latakia and Aleppo as well as all areas south of it is in preparation. Its start will depend on the outcome of currently ongoing negotiations.

U.S. attempts to turn the Turkish President Erdogan against Russia have failed. Talks were again held today between Turkey and Russia. Erdogan's threat that the Syrian army has to retreat back to the Sochi agreement lines by the end of the month or will be attacked by the Turkish military is taken seriously only by those who do not understand Syrian or Russian thinking.

The Syrian president gave an appropriate response to it.

The battle to liberate the countryside of #Aleppo & #Idleb will continue regardless of some empty sound bubbles coming from the north.

Kudos to saa and the people of syria for not putting up with this shit from outsiders.. thanks for reporting on it with authority too b.. much appreciated.. thanks also to russia, iran and other countries that have been unwilling to see syria fall to the same sickos.. great news and it isn't over just yet either..

The mountain west of Darat Izza is a highly strategic location. If SAA takes it, the area around Dana and Sarmada are likely too fall soon too.

I think that the mountainous area east and immediately northeast of Mount Simeon is also important to get and hold, even though it seems to be TFSA occupied Afrin. It overlooks most of the south of Afrin valley.

A big question for the coming days is if SAA will go straight for the jugular and cut the lifeline to Turkey at Bab Al Hawa, or if they will be content for the moment with cutting the connection between TFSA occupied Afrin and HTS occupied Idlib.

"Today I have met with Special Envoy of the UN Secretary General for Syria Geir Pedersen. We are not overreacting at the fact that the committee is making slow progress, but, of course, we do not want to give the impression that it will function forever. Most important is that the Syrians reach an agreement among themselves.

In this sense, our relations with Turkey are very important considering Russia’s opportunities, as well as Iran’s, by the way, in its contacts with the Syrian leadership and Turkey’s ability to influence the opposition and members of military groups on the ground.

Let me note that Russia is interested in seeing other countries in contact with the opposition positively influence it as well; first of all, the Persian Gulf monarchies. Our goal is to unite efforts and help create comfortable conditions for the Syrians to work in.

Let me make another point directly connected with Idlib, which you mentioned at the very beginning: the defeat of terrorism is unavoidable.

Our American colleagues have already announced several times that they defeated ISIS and destroyed terrorism in Syria, as well as in Iraq. But let me note that, in addition to ISIS, there also is Jabhat al-Nusra, which is now called Hayat Tahrir al-Sham, which, like ISIS, is considered a terrorist organisation by the UN Security Council. Now it controls a larger part of the problematic Idlib security zone. This is one of the last terrorist strongholds, but at least the only one on the western bank of the Euphrates.

Today I have met with Foreign Minister of Turkey Mevlut Cavusoglu, my colleague and friend. Our agreements with Turkey include ensuring a ceasefire, establishing a demilitarised zone, and, what’s most important, separating the normal opposition from terrorists. These agreements do not mean we will stop our uncompromising fight against terrorist groups. This is a difficult task. Terrorists try to use civilians as a human shield. We have seen this in the infamous refugee camp of Rukban and in the Al-Hawl refugee camp, controlled by Kurd squads in cooperation with the Americans, above all, and in other regions of the world. The task is not easy, but contacts are underway between Russian and Turkish experts, diplomats, military personnel and security officers to find ways to execute the Idlib agreements I have mentioned. The next contacts are scheduled for next week.

Question (retranslated from German): I find your statements on Syria inconclusive. How can the Russian Government guarantee Syria’s sovereignty while Turkey has a military presence in Idlib, Afrin and other parts of northern Syria? It is obvious that Turkey is there to stay. I was not convinced by what you said.

Sergey Lavrov: This is not complicated. The purpose of what we are doing in Syria is not to convince you. You are a journalist, as far as I understand. You have every right to view what is happening there based on your understanding of these developments. We are doing on the ground what is required under UN Security Council Resolution 2254. Among other things, it guarantees the sovereignty and territorial integrity of the Syrian Arab Republic. It is the UN Security Council that guarantees Syria’s sovereignty, not Russia.

Apart from the Idlib problem, the developments on the eastern bank of the Euphrates are the main challenge, since this is where the gravest violations of this sovereignty are taking place with the establishment of parallel government institutions with clear separatist aspirations. We regularly raise this issue with our US colleagues who maintain their proactive presence on the eastern bank.

I have already mentioned the problems associated with the Rukban and Al-Hawl camps. There are also problems with the Al Tanf zone. All this has to do with the sovereignty of the Syrian Arab Republic. We act in strict keeping with the UN Security Council resolutions. Our utmost priority is to fight terrorism, address the humanitarian needs of the population and facilitate the return of refugees"

Note that when the UN requirements are met, Syria will be free and sovereign again.

Turkey will 'be able' to withdraw.

All communities will be forced to the vote.

Terrorist activity will be much muted, but like Iraq continue. Unlike Iraq, handled immeasurably better.