February 26, 2020
Please make sure these dispatches reach as many readers as possible. Share with kin, friends and workmates and ask them to do likewise. 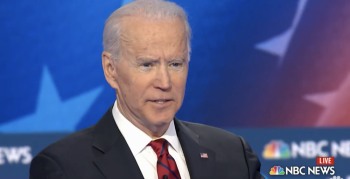 Biden: It’s not my corrupt, warmongering stinking corporatist-Democrat record. It’s the Russians, I tell you!

Following his resounding defeat in Nevada in the Democratic Party Caucus, Joe Biden blamed the Russians, telling CBS News that the “Russians don’t want me to be the nominee, they like Bernie.”

In none of the above cases, has one iota of evidence been produced to validate the accusations directed against Russia.

Very clearly what we are seeing is a process of scapegoating in which failing corporatist candidates seek to blame Russia for their defeat and the intelligence establishment uses Russia to try and smear candidates who are not to their liking.
ABOVE: The pathetic American media—stenographers to US imperialist power— are enthusiastically disseminating the latest wave of disinformation concerning Russia. Here’s one of USA Today‘s artifacts supposedly showing “how the Russians do it”. Despite the implosion of the Mueller investigation, the “fact” they meddled is never put into question.

This strategy represents a sad caricature of the McCarthy period, which is viewed by historians as the worst period of repression in American history.

In that era, Joseph McCarthy emerged as a political demagogue who claimed to have a list of 205 pro-Russian communists working for the State Department and government.

No proof was ever offered that anyone on that list was a communist.

Though McCarthy was himself eventually discredited and removed from his Senate seat, he gave name to an entire era of history that was marked by irrational paranoias about Russia.

The consequence was horrible for the many victims who lost their careers or went to jail after being hauled by the House of Un-American Activities Committee (HUAC), which amounted to a political inquisition. 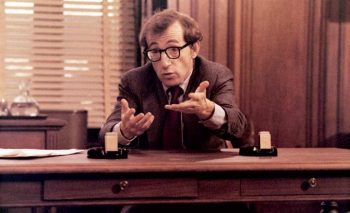 Woody Allen in 1976’s classic, The Front, directed by Martin Ritt, himself a blacklisted film-maker. The movie, with a cast of actors persecuted by the McCarthy witch-hunt, was one of the most outspoken in denouncing this manufactured nightmare.

American foreign policy was also warped, as the nation committed massive amounts of spending on the military to fight against an exaggerated Russian threat.

After World War II, Russia had in fact been decimated by its victory against the Nazis and was in no position to start a new world war or invade Europe or America – as American intelligence analysts had concluded.

However, vested interests who wanted a Cold War created the Soviet menace and played up the threat of domestic Russian subversion in order to validate the government’s warped spending priorities.

The history of the first Cold War is worth recalling today as we are living through another period of irrational hysteria and paranoia about Russia that will lead our country into a new dark age.

The political establishment appears to be frazzled at this time since a democratic socialist, Bernie Sanders is poised to capture the Democratic nomination.

The president, Donald J. Trump has also been hated for a variety of reasons that included his desire for better relations with Russia as expressed during the 2016 presidential election.

Social critic Randolph Bourne once wrote in a famous essay that “war is the health of the state” – meaning to imply that governments would always invoke the danger of a foreign enemy in order to divert popular mobilization away from class struggle and meaningful social change.

His insights hold great relevance today and should be heeded by grass roots movements seeking to break the back of America’s ruling oligarchy and bring real change to this country.

About the author(s)
Jeremy Kuzmarov is the author of The Russians are Coming, Again: The First Cold War as Tragedy, the Second as Farce (Monthly Review Press, 2018) and Obama’s Unending Wars: Fronting for the Foreign Policy of the Permanent Warfare State (Atlanta: Clarity Press, 2019).