New documents have leaked on the organization of British propaganda against Syria. They provide insight into how bona fide journalists could have been permanently intoxicated by the myth of the "Syrian revolution" and why the UK withdrew from Syria despite the success of this operation.

Democracy presupposes the ability to hold honest public debates. Therefore, propaganda would be the prerogative of non-democratic regimes. Yet history teaches us that modern propaganda was conceived in the United Kingdom and the United States during the First World War, and that the USSR and Nazi Germany were pale copycats. 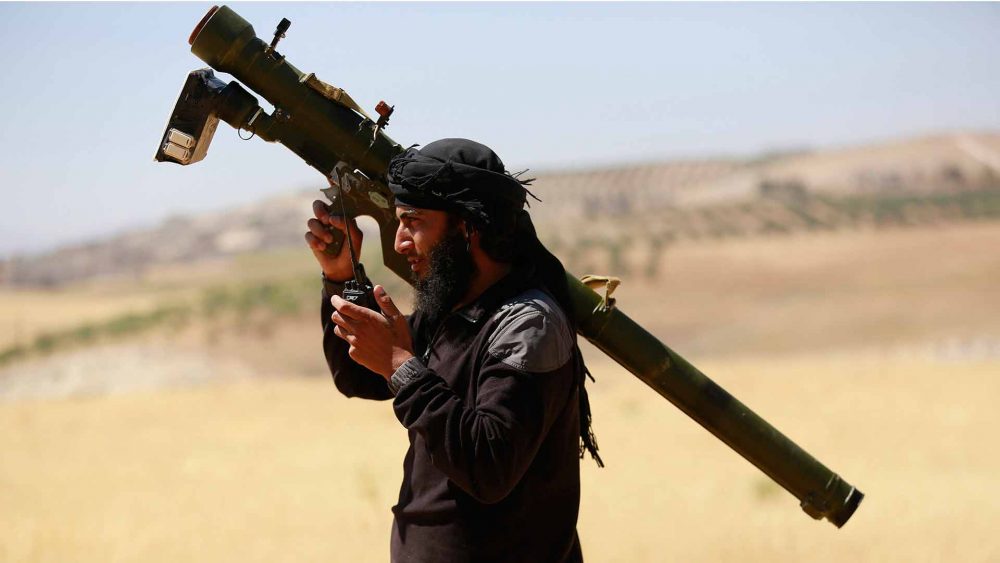 US equipped terrorist in Syria. The MANPAD menace indeed. Normally described as a freedom seeking rebel, of the "moderate" kind.

During the war against Syria, we have often explained that the reality on the ground did not correspond in any way to the image that Westerners had of it. We denounced the fabrication of evidence by the US, British, French and Turkish secret services to conceal Western aggression and to incite a revolution against a dictatorship.

While the United Kingdom has not been present on the ground since 2018, journalist Ian Cobain has just published official British documents in the Middle East Eye that shed light on how London massively intoxicated bona fide journalists and then withdrew [1] He had already published in the Guardian, in 2016, revelations on the organisation of MI6 in this matter [2].

Above all, it is important to remember that the British were not pursuing the same objective at all as their US ally. London hoped to regain its influence from the colonial era (as did Paris). The United Kingdom did not believe that the United States intended to destroy the state structures of the broader Middle East as a whole (Rumsfeld/Cebrowski strategy). That is why it had conceived the "Arab Spring" operation on the model of Lawrence of Arabia’s "Great Arab Revolt" (the Muslim Brotherhood now playing the role of the Wahhabi of World War I). Their propaganda was therefore designed to create New Syria around this Brotherhood and not to divide it as the CIA wanted and still wants.

Westerners had already been convinced of revolutions in Tunisia, Egypt and Libya. It was therefore easier to sell them a fourth field of operations.

Good-faith journalists had been led by "revolutionaries" (actually Turkish and NATO secret services) to a Syrian village, Jabal Al-Zaouia, to attend and film Free Syrian Army rallies. Many of them were intoxicated and believed in a popular uprising. When Daniel Iriarte denounced this production in the Spanish daily ABC - because he had recognized on the spot not Syrian but Libyan fighters under the orders of Aldelhakim Belhaj and Mehdi al-Harati [3] - the press refused to recognize the manipulation to which it had been subjected. The inability of journalists to admit their mistakes, even when some of their colleagues confuse them, remains the best asset of the masters of propaganda.

As always, the British RICU (Research, Information and Communications Unit) had recourse to a scientist, here an "anthropologist", to supervise the manipulation. It entrusted its implementation to several subcontractors, including a "former" MI6 officer, Colonel Paul Tilley; the word "former" is important here, as it means that he could deny all responsibility if the operation went wrong. To get closer to the field, three ad hoc offices were opened by MI6 contractors in Istanbul, Reyhanli (Turkey) and Amman (Jordan), while the CIA operated from Germany.

This operation began in the wake of the chemical weapons affair in the summer of 2013, when the House of Commons, scalded by propaganda during the war against Iraq, strictly forbade the Ministry of Defence from deploying troops on the spot. As a result, the initial budget of the Foreign Office was increased and assumed by the British Ministry of Defence and Canadian and American agencies, as the military had no other means of intervention.

It was placed under the command of an MI6 officer, Jonathan Allen, who became the number two in the British diplomatic delegation to the Security Council at the UN.
The British Secret Service officer and Her Majesty’s Chargé d’Affaires, Jonathan Allen, giving a press conference at the UN with his privileged ally, the French ambassador, François Delattre.
The originality of the operation, led inter alia by Innovative Communications & Strategies (InCoStrat), is that it is presented as a business partnership with no links to the UK authorities. The Syrians who participated did not feel that they were betraying their country, just that they had found an opportunity to make money to survive despite the war. Indeed, in relation to their standard of living, the salaries paid were very high.

The system of "citizen journalists" was very economical in relation to the £500,000 per month of the British budget ($50-200 for a video, $250-500 for regular freelancers) to find "information" or "evidence" of the regime’s repression against its own population. These materials, once sorted, were sent by MI6 to the BBC, Sky News Arabic, Al-Jazeera (Qatar) and Al-Arabiya (Saudi Arabia), four stations that are fully participating in the Western war effort, in violation of UN resolutions banning war propaganda. The Syrian collaborators had to undertake in writing to remain anonymous, unless expressly authorized, and not to divulge their links with any company.

Western bona fide journalists, unable to trace Syrian "citizen journalists" and verify the context of videos and other "evidence" - which is the raison d’être of their corporation - were convinced by the noise of the four television stations. 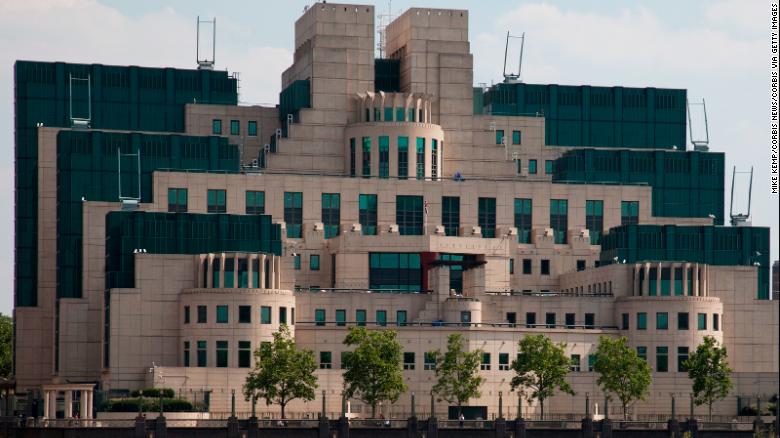 The MI6 building in London is said to be like an ancient fortress resembling a ziggurat over the River Thames. Like the CIA HQ in Langley VA, a lot of evil is hatched within its walls.

Ian Cobain’s documents attest that in addition to this international target, there was also a target in Syria. London wanted to provoke a change in the population’s attitude in favour of the "moderates" in the face of the "extremists". On this point, it does not seem that Middle East Eye realised that these words should not be interpreted in the ordinary sense, but in the light of Prime Minister Tony Blair’s decisions. He, during the elaboration of the "Arab Spring" plan, had stated that His Majesty’s administration should consider as allies the "moderately anti-imperialist" leaders such as the Muslim Brotherhood, while the opponents were the "anti-imperialist extremists" such as the nationalist regime of the Syrian Baath [4].

The anthropologist who supervised the programme also indicated the need to create emergency services on the ground (the Free Police and the White Helmets of the ’former’ MI6 officer James Le Mesurier) not so much to help the population, but to give it confidence in the institutions to come once the National Union regime around the Baath is defeated. On this point, he referred to the plan for the total and unconditional surrender of Syria drafted by the German Volker Perthes for the number 2 of the UN, Jeffrey Feltman [5], which the British therefore misinterpreted.

This disagreement is the main cause of the scramble of this operation when Washington tried to create "Sunnistan" with Daesh and "Free Kurdistan" with the Turkish PKK and the Iraqi KDP. The British, considering that this was no longer their war, decided to withdraw.

The MI6 programme had three components:

Unite Syria:
“Unite Syrians through positive affirmation of common cultures and practices and to restore trust between neighbours, while illustrating Syrians’ strength in numbers”.

Undermine:
“Seeks to degrade the effectiveness of VE [violent extremist] networks in Syria by undermining the credibility of VE narratives and actors and isolating VE organisations from the populace”.

According to Ian Cobain’s documents, MI6 subcontractors also trained Syrian opposition spokesmen, developed accounts on social networks and organised press offices operating 24 hours a day. They do not mention the logo design and Hollywood staging that we have reported, such as the military parade in the Ghouta with tanks passing in front of the camera and with extras.

The press offices aimed to put Syrian opposition spokesmen in touch with Western journalists and brief them before interviews. In this way, the Western press believed in good faith that it was getting its information from an independent source at low cost. If, at the beginning, during the destabilisation phase (until mid-2012), all the international media sent reporters to the field (which the British manipulated), there are none today. Westerners have become accustomed to believing the news agency set up by MI6 in London with the Muslim Brotherhood, the Syrian Human Rights Observatory, although it does not have the means to know anything about some of the events it reports on. 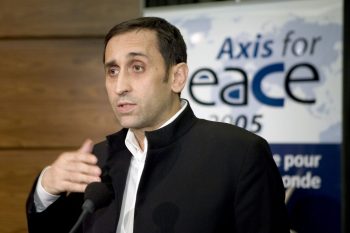 Thierry Meyssan is a French journalist and political activist. He is the author of investigations into the extreme right-wing, as well as into the Catholic church. Meyssan's book 9/11: The Big Lie challenges the official account of events of the September 11 terrorist attacks. He is president-founder of the Réseau Voltaire (Voltaire Network).