Syria – Another Short Note On The Recent Developments

In his usual no-frills prose, Moon of Alabama's editor and chief correspondent brings us up to date on the situation in Idlib and Erdogan's latest maneuvers. 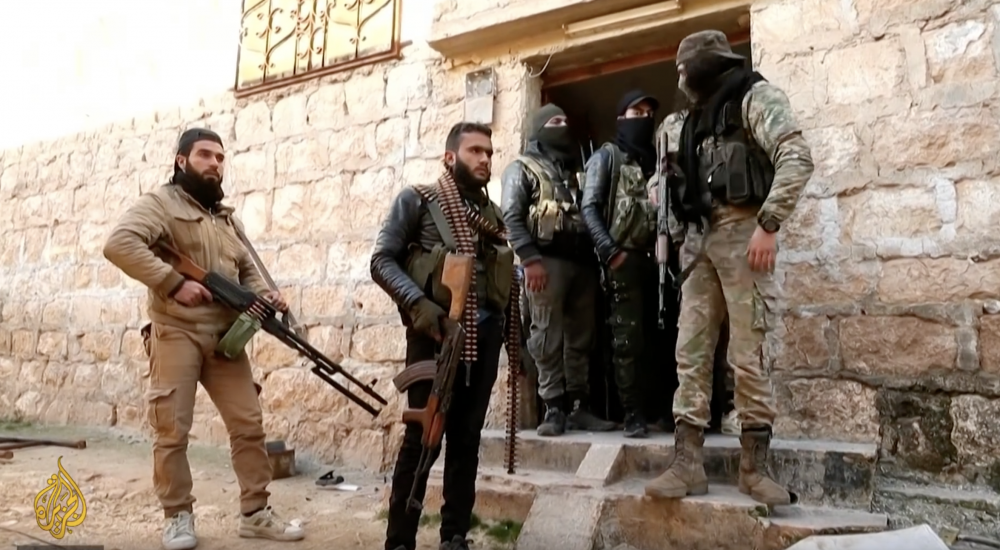 Erdogan has been supporting the anti-Assad Jihadi vermin for many years, a dependable ally of Washington in its regional hegemonic operations.

[dropcap]A[/dropcap]fter the confusion caused by the sudden stand down of Russian forces in Syria and the following Turkish drone attacks everything seems to be back to normal.

Russian planes are again bombing Jihadis and Turkey has been told by Russia that none of its planes or drones will be safe within Syria's sky.

The Pentagon announced that it will not provide air support to Turkey. It will also not send any Patriot air defense to Syria but President Trump promised to ask other NATO countries to do so. They are likely to deny the request. It seems that Pentagon has won the fight with the State Department which supported the Turkish push for protection.

The Turkish president Erdogan said that Turkey has no "particular problem" with Russian and Iran aligned forces in Idleb. This comes after Iran and Hizbullah had warned that Turkish troops in their now surrounded 'observation posts' would be easy targets. The Turkish units which have invaded Idleb were quiet today. 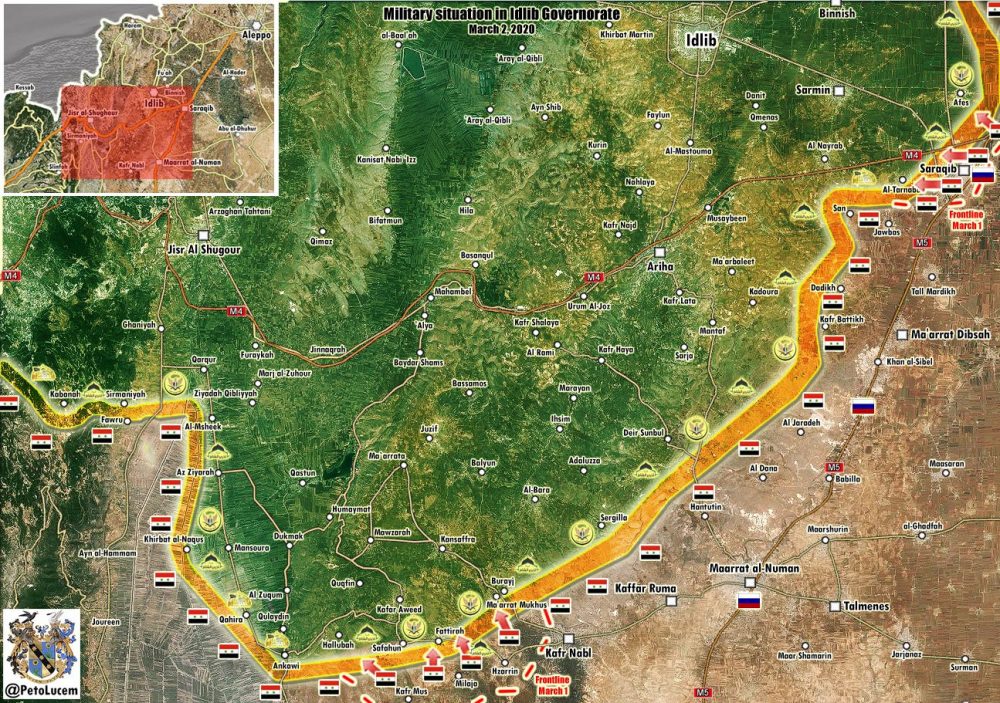 The Syrian army has again regained the areas that were lost during the last week. The city of Saraqib is again liberated. Russia let it be known that its military police will take care of security in the city. This means that it is off limits for another Turkish Jihadi attack. The M5 highway can now be reopened and will be secure.

There is another large supply operation from Russia underway. During the last three days two Russian landing ships, which usually carry heavy weapons like tanks, passed through the Bosporus on their way to Syria. Eight Ilyushin Il-76 strategic airlifters landed at Hmeymim, Latakia during the past three days. These likely carry additional air defense systems or additional fighter planes.

The resupply should silence any talk that Russia has given up on Syria.

Erdogan wants Idleb but neither Syria nor Iran nor Russia will let him have it. President Putin will meet Erdogan during the coming days and will make sure that the point is understood.

I never could figure out the scale of the Turkish retaliaton. Such wildly different reports, and the usually reliable Russian reports were not forthcoming.

Thanks b for the update. The fog of war is clearing, and hopefully calming down the hysteria over Putin's actions and intentions.

Maybe the confusion was intended to allow for face-saving for both sides?

As with all previous cease-fires,they will soon be broken by the jihadis or now, by Turkey itself, to the detriment of the SAA and its allies ... let's hope that Putin can structure Thursday's negotiations in such a way that the detriment would be minimized. My preference would be to demand that all Turkish military support defending Idlib City be withdrawn (leaving the jihadi fanatics on their own) and allow the SAA and its allies to finish the vermin off.

There are three reasons Erdogan will reverse course.

He got away with a vicious attack by drones and artillery. However, he knows that if he repeated that tactic, killing Syrian and Hezbollah troops in large numbers, Syria would decimate the Turkish observation posts, and he would lose many hundreds of men.

He also knows the Russians will pulverize him if any Russian MPs or special forces in Idlib are killed or if a Russian aircraft is shot down.

Iran has signaled bluntly that missiles will fly if he continues his aggression.

Most likely, new air defenses are coming to Syria from Russia. Additional Pantsir units is all that is needed to take care of the drones.

Because of the changing geopolitical dynamic of China, I expect the port at Tartus will soon have a shipload of Chinese tanks gifted to the Syrians (in exchange for oil and drilling rights). China has been very clear that it wants those thousands of Uyghurs in Idlib eliminated before they return to Xinjiang, Sichuan and Yunnan provinces.

China has been very clear that it wants those thousands of Uyghurs in Idlib eliminated before they return to Xinjiang, Sichuan and Yunnan provinces.

Then why don't they do something about it? China has done FA to date to help the Syrians.

The competent opinion of a well-known Russian political scientist on the escalation of Russian-Turkish relations in Syria. The aggravation of the situation was a deliberate step of Moscow.

What scares me now, is what Erdo will do to save face. He made a lot of threats and he has to deliver something to his public. Lets hope Putin will give him something or all Turkey's neighbors are in danger.

b,
Thank you for bringing the sunshine to clear the clouds.

Poor baby Erdo. Tantrums and hissy fits.
Read that Esper refusal earlier today. Hopeful there will be no hidden contraband in the promised humanitarian aid.
There seems to be a lot of confusion in the mealy mouthed statements out of D.C.
We stand by our ally Turkey but No, no helping hand. You are on Syrian soil, and you are on your own
But, but NATO is ready for anything that might happen

What does this say about US capabilities with troops still in Syria?

Also Monday, Chairman of the Joint Chiefs of Staff Mark Milley said there was "no clear, unambiguous intelligence on who was flying which planes" in the deadly attack on Turkish troops in Idlib last week.

If you believe that, I have some lakeside properties in the Namibian desert for sale. Price is incredible. Pre-purchase alert: Temperatures dip significantly around midnight.

Russia had offered joint patrols with the Turks before. Turkey had declined it. I would think any deal starts there. Russia and Turkey doing joint patrols and sharing information. Reopen the M4 and M5. Keep the crazies close to Turkey or kill them all.

I wonder if Russia will be sending any of those new S-350 defence systems for battle testing. This is exactly what they have been designed for.

Short vid of how refugees are being treated by Turk "minders" at Greek border: child abuse to the max White Helmet style!

"'The #Turkish-staged wave of refugees that is storming the border with Greece seems to be employing propaganda methods that they’ve learned from their #WhiteHelmets counterparts in #Syria.
Turkish-sent refugees keep children near fire to make them cry.'"

Two more Turkish drones shot down, while Zionists provoke unrest in Daarra again. Maybe in a year or so when Syria finally looks to regain the Golan that region will finally be weeded of its terrorist elements.

I have this simplistic idea that Erdo is simply one of those kind of people who simply cannot stay out of trouble. If this is the case, these small but deadly 'incidents' will likely just go on and on.  Someone around here mentioned that the Kurds have the habit of multiplying like rabbits. So Erdo might have a realistic reason to be disturbed by that.

There are no "white helmets" in Turkey to organize a gas attack false flag. Also, since Turkey is not a headchopper jungle no-go zone, the site of alleged attacks would be immediately inspected by independent experts, which would not be very convenient for the organizers a staged event. If there is to be one more false flag, it would most likely be staged either in Idlib city or in one of the refugee camps on the border with Turkey.

But I doubt that we will be seeing any more "gas attacks". All these false flags in Syria were British operations. The Brits have left the scene, James Le Mesurier even in quite spectacular fashion.

China’s aggressive measures have slowed the coronavirus. They may not work in other countries

Primary Notes from a Shit-Hole Superpower: Crashing the Party from the Top Down