Two Other Pandemics: The Lemming and Apathy Viruses 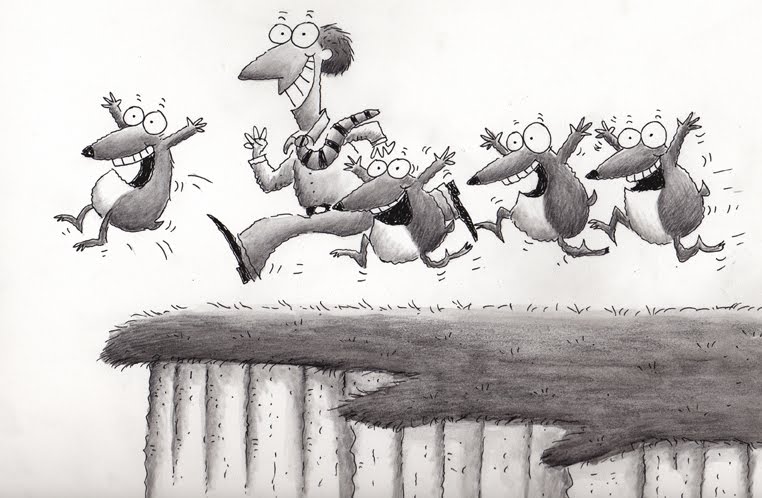 Americans cheerfully participating in their political system. The best in the world, of course.

Of course, the worst pandemic of the 21st century is out and about us. Italy is now in a 'lockdown' state and throughout most of the world people are in a panic mode. And why not? Viruses like this Corona Virus can kill. Yet, in the world of politics there have been, for a long time now, those two other ones: The Lemming Virus and the Apathy virus. They only kill what is left of our Republican Democracy... which is not much at all! The Trump cabal has very shrewdly mislabeled what is actually the main force behind this hijacking of our democracy, the real Deep State. What Eisenhower referred to as the Military Industrial Complex is in actuality the genuinely crooked and evil Deep State. Thus, Trump's lemmings keep harping on what in reality is the actual cause of  their demise, the force not in opposition, but actually behind his actions. It is the old joke of what the masochist said to the sadist. The masochist said ' Hit me!' .... and the sadist answered ' NO!' .  Ditto for the lemmings who run off the cliff of reason when the Democratic Party pied pipers lead them.

We have this Two Party Scam that has continually gotten more powerful since the end of WW2. We know how the right wing Republican Party behaved when FDR tried to save Capitalism for his class. He made many great reforms to the system, with Socialism as the torch bearer. Not complete Socialism, but enough common sense policies to help stop the massive bleeding of the masses. Yet, the greedy Republican Fat Cats wanted no part of any reforms to their plantation system. If you read the history of Marine General Smedley Butler, you will find out how those same right wing Neo Nazi American Fat Cats tried to institute an actual Amerikan Coup de tat. Butler ratted them out and it failed. Then  FDR dies and his successor, good old ' Give em hell Harry ' Truman, drops the two immoral and unnecessary A Bombs to show our new enemy, the Soviets, that we had the bomb and could make more than just one. Truman, the Democrat, helped set up the CIA under his watch to do as many ' dirty tricks' they could do against his new enemy, our former ally. The Soviets were the ones who lost almost 30 million of  their people to stop the Nazi machine. ' Friends...lovers no more' as the song went. Harry also made sure that the Taft- Hartley Act was used to stop the unions from doing what should be as American as apple pie: The labor strike. From that point on the scam was in full throttle. So much so that the Democrats showed no balls when one of their own, JFK, stood up to that Deep State, and it killed him. Then, again, when that same evil group had MLK and then RFK murdered, silence from the other half of this One Party/Two Party con job .

Now we come to the most heinous of the two viruses, the Apathy Virus. We have millions, perhaps over a hundred million of our citizens, who suffer from this ailment. You engage one of them in any sort of conversation about the situation facing us here in Amerika, and either they A) Don't know shit or B) Don't care to know. One surmises that the old adage ' Ignorance is bliss' rings true for them. They may care about what gossip is going on where they live, or care about their kids' soccer league. Perhaps they care about the prices going up at the supermarket, or their other bills, but NEVER  about the cause of these problems. Some may get pissed about the price of their cable or phone bills, or how they are being squeezed by health care or dental care costs, or insurance costs... but never about the WHY! They just frown and pay the bills ( and some may not even be able to do that ) and never seem to say ' Hey, this sucks! We need some needed change here!' No, like the serfs on a giant feudal manor, they just know their place in the BIG PICTURE  and won't upset the MAN. Here's the kicker: When someone or maybe a group of someones comes along to organize their anger and frustration into a better solution...they turn away. As far as the lengths that this Apathy Virus can come to, this writer remembers, as if it was yesterday:

Everyone knows the Kitty Genovese story. On March 13, 1964, three dozen New Yorkers heard a 28-year-old woman, their neighbor, being raped and stabbed in the street below by a house burglar named Winston Moseley, and no one did anything. Some turned up the television so as not to hear her screams.

W.C Fields said it best folks: " Never give a sucker an even break!"

Apathy indeed. No better here in Switzerland or the whole of Europe either. Moving back to Ireland as fast aPhilos I can to experience some apathy and empathy away from this virus of complacent zombies. G. Carlin was indeed funny with “grit” and Philip verifies it. Thank you.